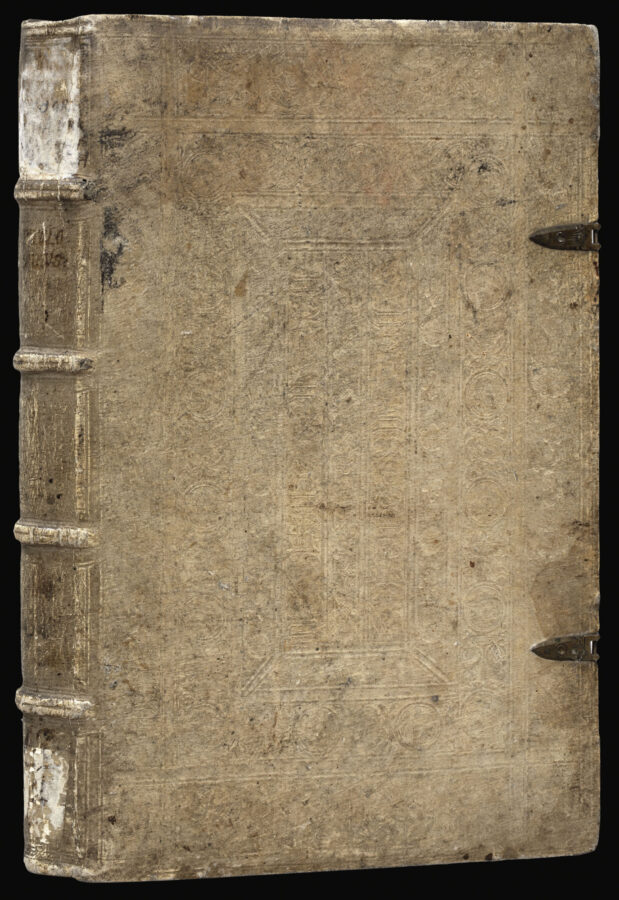 A magnificent example of the first Latin edition of Sebastian Münster’s Ptolemy, containing the first separate printed map of the Western Hemisphere; the first ​“set” of maps of the four continents, and the first printed map to name the Pacific Ocean.

The work is a revision of Willibald Pirckheimer’s translation for which Munster redesigned the maps and added an appendix. Though it is not known who did the woodcutting for the maps themselves, the decorative borders on the versos of the maps have been attributed to Hans Holbein.

While individual continents had been mapped as entities, in print, before 1540 (Africa in Montalboddo’s ​‘Itinerarium Portugallesium’, 1508; Europe by Waldseemüller, 1511; America by Stobniza, 1512; Asia in Münster’s edition of Solinus, 1538), Münster was the first to publish a set of maps of the four continents.

The maps are also famous for their decorative elements — Magellan’s ship, the ​‘Victoria’, is prominent on the map of the Americas, the ​‘monoculi’ (or cyclops) on the map of Africa, the shipwreck of St. Paul on the second map of Africa, and the drawing of the elephant on the map of Ceylon. Also, the map of Europe is unusual (by modern standards) as being printed with south at the top of the page.

Coming half a century after Columbus’s initial landfall in the Indies, Münster’s map of America is the first separate printed map of the Western Hemisphere, and shows Japan as a hypothetical close insular neighbour of America. Two decades after Magellan’s circumnavigation, it is also the first printed map (along with Münster’s world map) to refer to Magellan’s great ocean by the name he had christened it — Mare Pacificum. Also of note is the strange constriction of the North American land mass towards the top of the continent. This is the first printed depiction of a confusion resulting from Verrazano’s report of the sighting of a ship in a body of water on the other side of an isthmus. Verrazano’s isthmus was, in reality, nothing more than the Outer Banks between Capes Lookout and Henry; his oriental sea, which he thought would lead to the blessed shores of Cathay (China) was, in fact, the Pamlico and Albermarle Sounds. In the Northeast, Münster has labelled Francisca (Canada), named by Verrazano after France and Francis I, shortly before his northerly return back to Europe.

In the Atlantic Ocean, Münster has correctly located a Spanish and a Portuguese standard, intended to reflect the division of the unknown world in two by the Papal Treaty of Tordesillas (1494). Zipangri (Japan), still known only from Marco Polo (who had heard tales of it but had never been there), appears as a very large, north-south oriented rectangular island off the ​“California” coast. In 1540, when the map was created, two or three years would still elapse before the first known European encounter with Japan. The Venetian merchant, Polo, was also the source for Münster’s belief in the complex of 7,448 islands situated between Japan and the Asian mainland (which is, interestingly, the first use of a numerical statistic on a map). As with Japan, Polo himself never ventured there; but by their number and the description of them given Polo by his hosts, it is likely that these islands were the Philippines. By Münster’s time, direct European contact with the Philippines had been made, both by Magellan (who died there) and almost certainly by eastward-bound Portuguese explorers before him. (Münster, on his map of Asia, has included the real Philippine island of Puloan.) It was a result of this archipelago of 7,448 islands and Europe’s underestimation of the Pacific’s true vastness that pushed Japan so close to North America on Münster’s map. A large illustration of Magellan’s ship, and the Unfortunate Islands he and his desperate crew passed on their ill-fated voyage, are shown below Japan. Their luckless path across the Pacific bypassed, though barely, islands of the Polynesian groups; these islands were rich in foods that might have sustained many of them, and particularly endowed with the sorts of plants whose citrus content would have spared them scurvy. Disease, violence, and starvation took the lives of all but 18 of the 277 members of the expedition. The map of Africa also contains many interesting, if not curious, features: a one-eyed giant seated over Nigeria and Cameroon, representing the mythical tribe of the ​“Monoculi”; a dense forest located in today’s Sahara Desert; and an elephant filling southern Africa. The Niger River begins and ends in lakes. The source of the Nile lies in two lakes fed by waters from the fabled Mountains of the Moon, graphically presented as small brown mounds. Several kingdoms are noted, including that of the legendary Prester John, as well as ​“Meroë,” the mythical tombs of the Nubian kings. Few coastal towns are shown, and there is no sign of the vast island of Madagascar. A simplified caravel, similar to those used by the Portuguese (and Columbus), sails off the southern coast. One of the intriguing aspects of this map is the loop of the Senegal River, which is shown entering the ocean in today’s Gulf of Guinea. Actually, this is the true route of the Niger River, but that fact will not be confirmed until the Lander brothers’ expedition in 1830. Strangely, this loop disappeared from subsequent maps of Africa for the following two hundred years!

A further interesting feature of the work is the plate of monsters of both land and sea, taken from Olaus Magnus’ ​‘Carta Marina’ of 1539, with abundant tusks, horns and twin-spouts. One vignette shows a galleon trying to outrun a monster by throwing their cargo overboard, while one sailor takes sight with a musket. Ortelius also adapted many of the monsters for use on his map of Iceland in 1587.

Sebastian Münster (1488–1552), cosmographer, humanist, theologian and linguist, was famous in his own age as a Hebraist, composing a Hebrew grammar and a list of Hebrew, Latin and Greek synonyms which were used widely by sixteenth-century humanists. A Franciscan friar from around 1506, Münster studied in Tübingen and taught in Basel and Heidelberg before leaving the order and moving to Basel in 1529, where he took up the chair in Hebrew. Whilst in Basel, Münster indulged in his other great love: that of cartography. The love affair had begun some years earlier in Tübingen, when under the tutelage of Johann Stöffler. Münster’s notebook of the time contains some 43 manuscript maps, most of which were based upon others’ work, except, that is, for his map of the Rhine from Basle to Neuss.

Münster would produce his first map in a printed broadsheet of 1525. The map, which covers Germany, also came with an explanatory text (only extant in the second edition of 1528), which lays out Münster’s vision for a new great survey of Germany. He readily conceded that the job was too great for one man and so called upon fellow academics to cooperate and supply detailed maps and text of their respective areas, with Münster working as the great synthesiser. Although the project would never get off the ground, much of its methodology and material would be used, with great success, in his ​‘Cosmographia’.

Throughout the next decade he produced, and had a hand in, several important works that would cement his reputation as one of the leading cartographers of his day; these included, among others, Johann Honter’s celestial charts (1532), his own Mappa Europae (1536), and Aegidius Tschudi’s map of Switzerland (1538). In 1540, he published his edition of Ptolemy’s ​‘Geographia’, the present work.

1. Johannes von Creytzen (1506–1575), Chancellor of Prussia and Professor at the Albertus University of Konigsberg (ownership inscription), thence by descent to his grandson:
2. Albrecht von Creytzen (Creytz) (1597–1634), president of the Hofgerichts in Königsberg (ownership inscription).
3. Friedrich August Gotthold (1778–1858), German educator and director of the the Royal Vollegium Fridericianum in Königsberg. A passionate bibliophile, he bequeathed his library of 55,000 books to the Konigsberg State and University Library (Library Stamp). 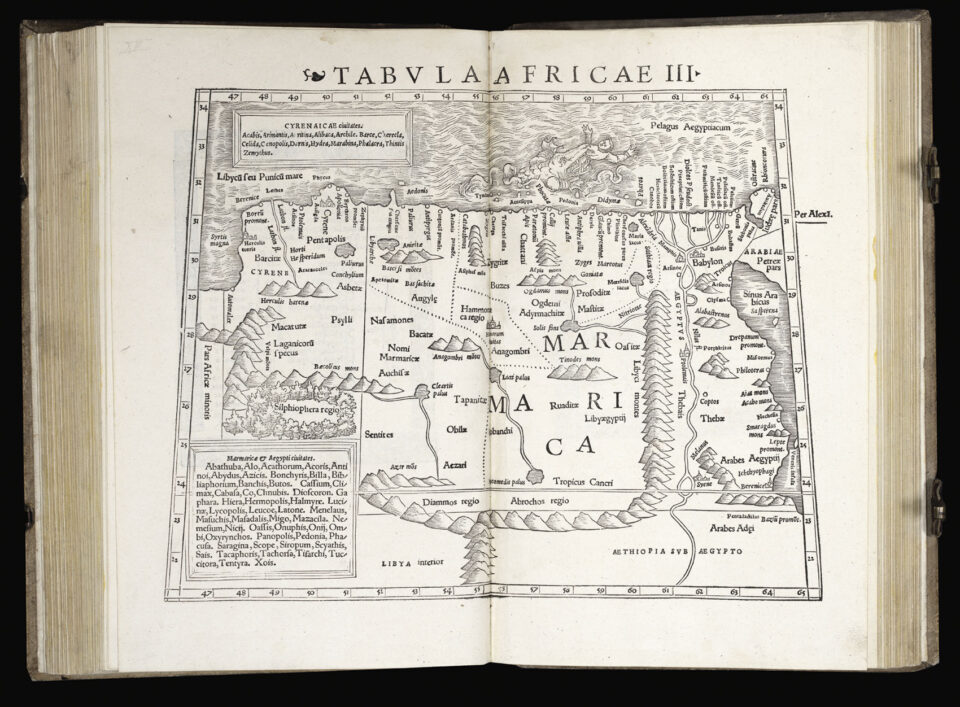 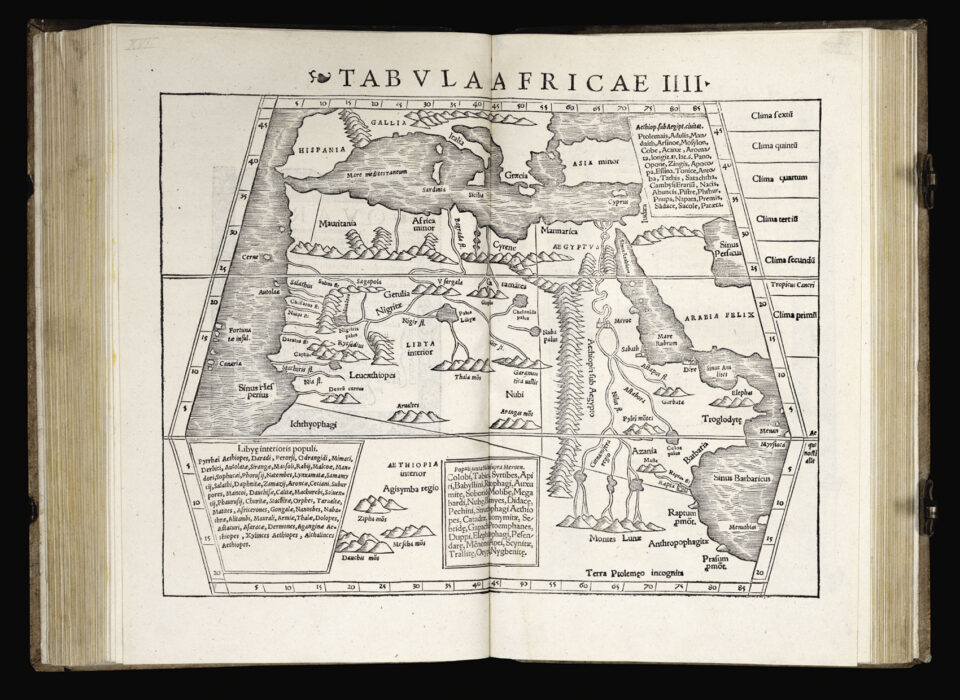 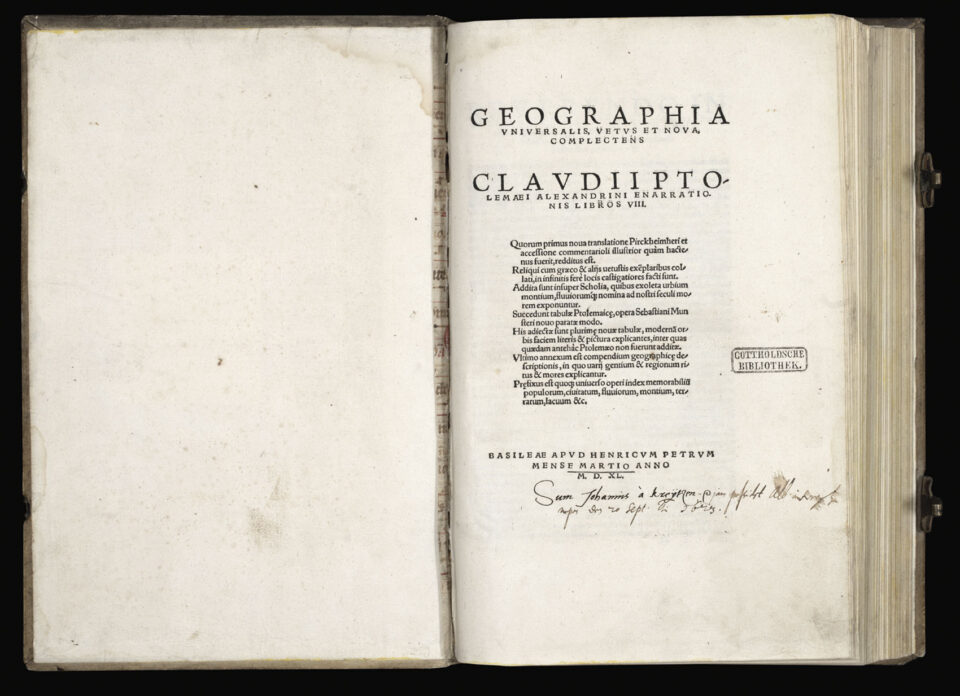 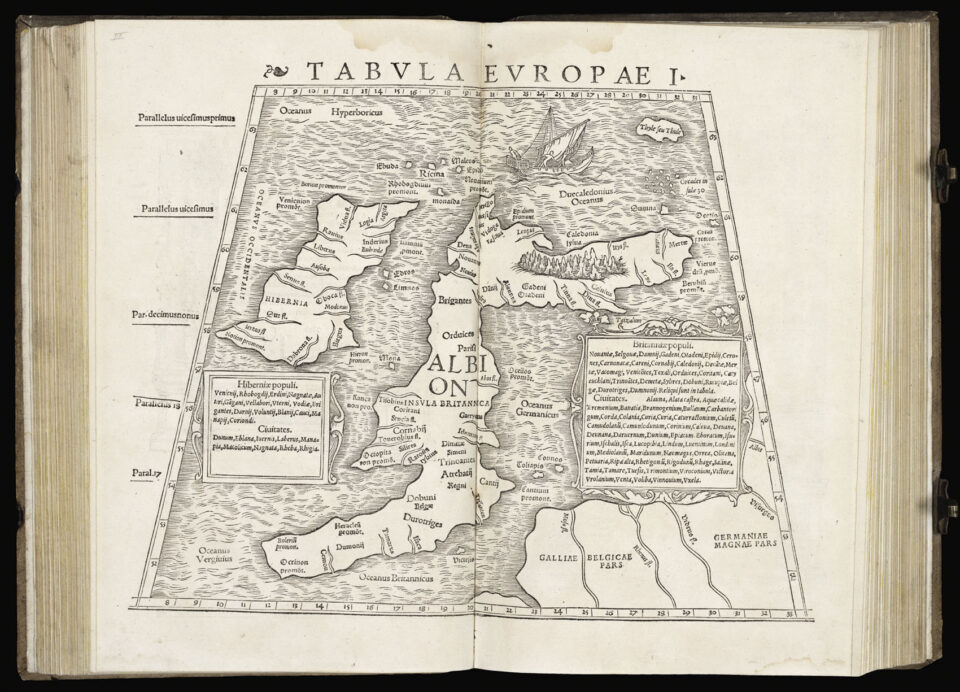 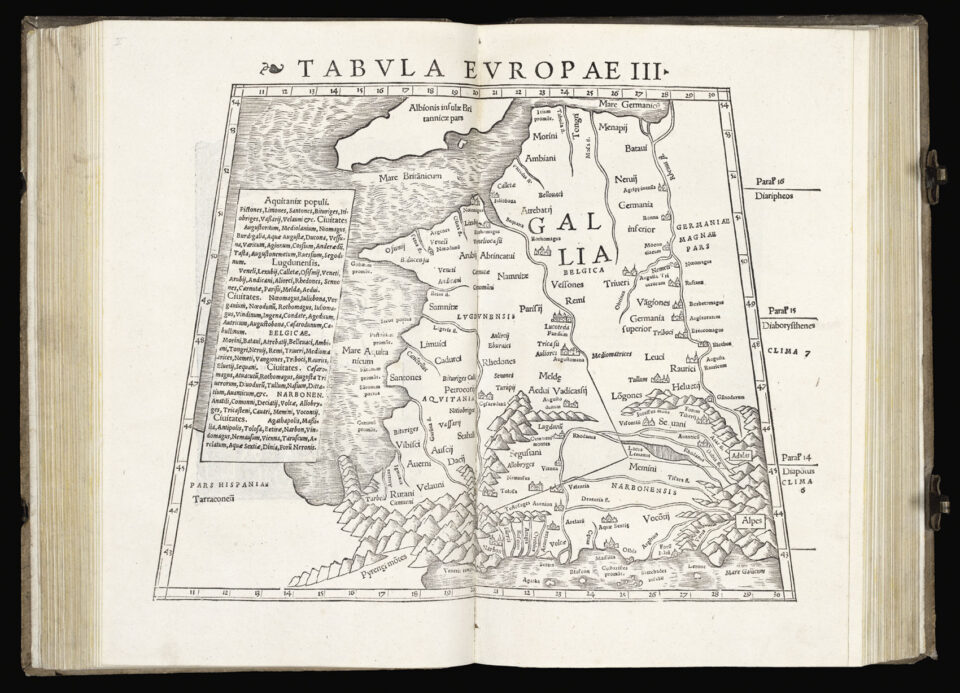 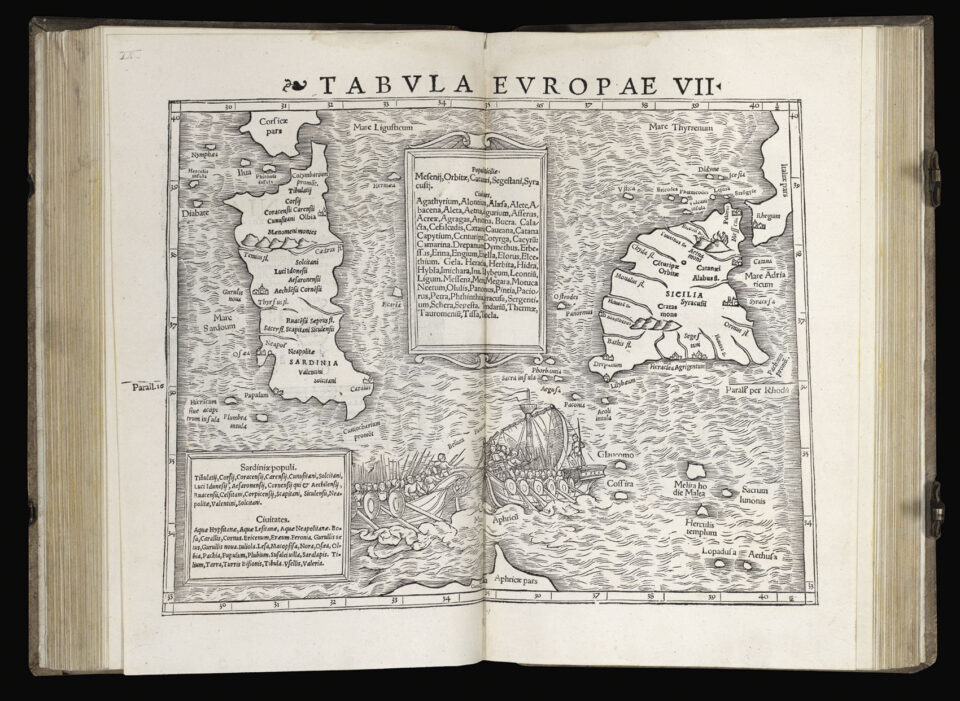 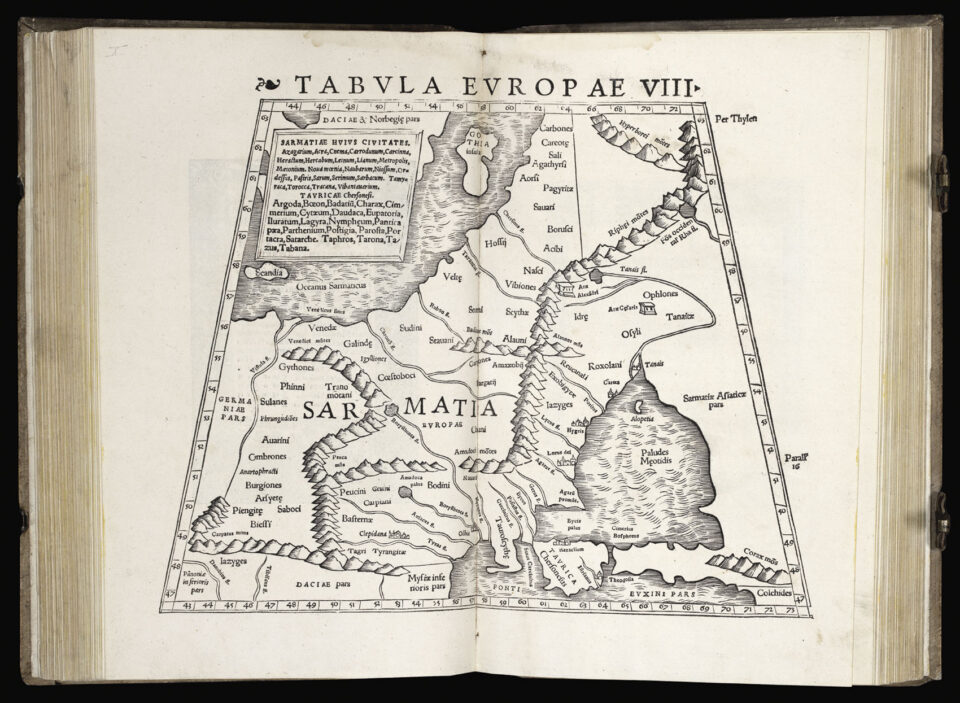 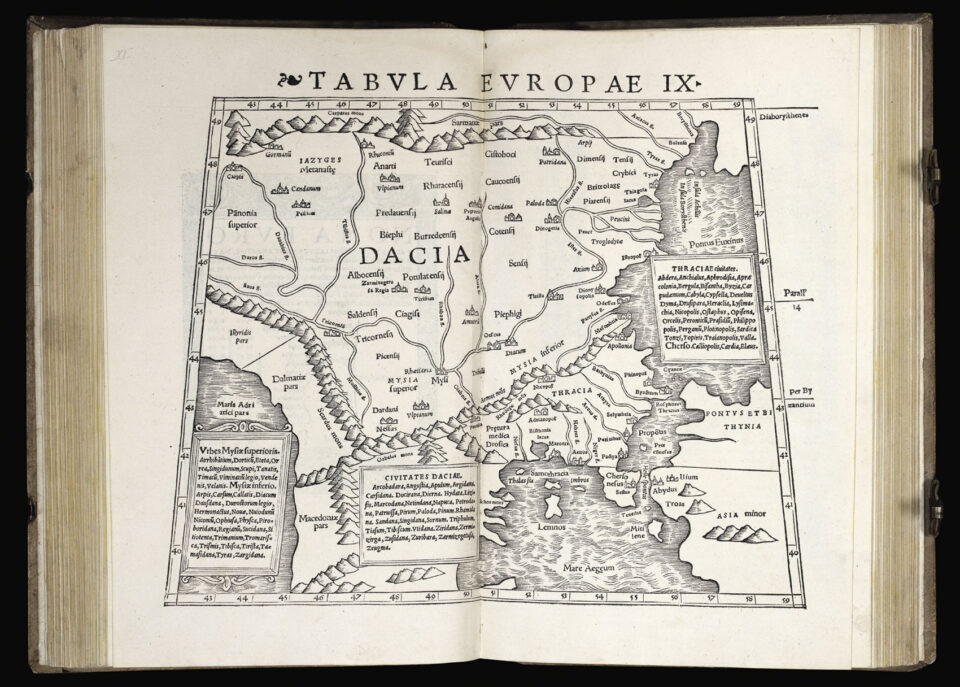 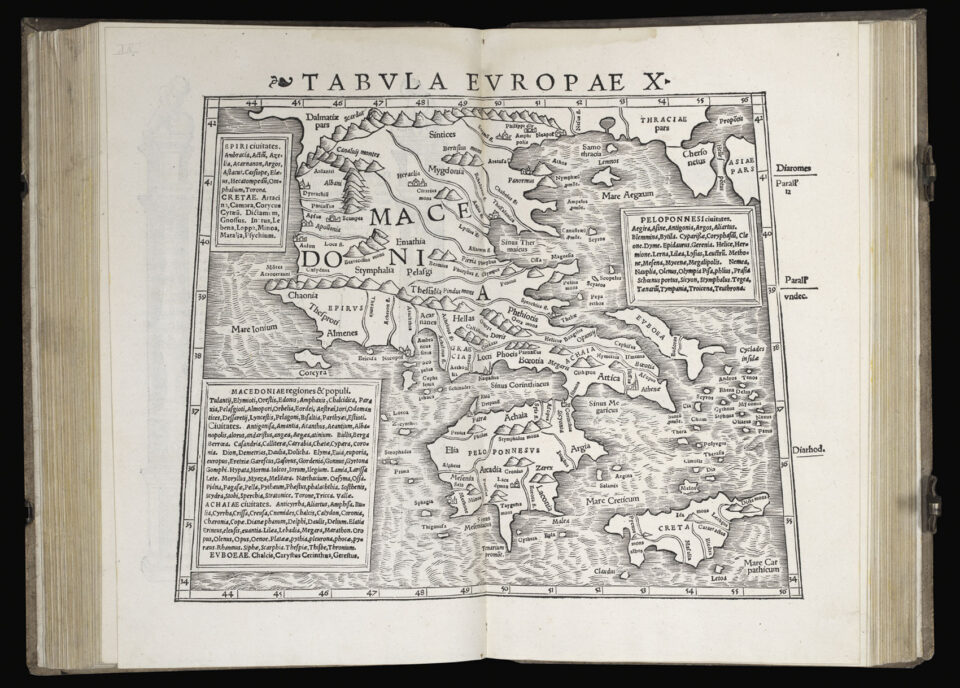 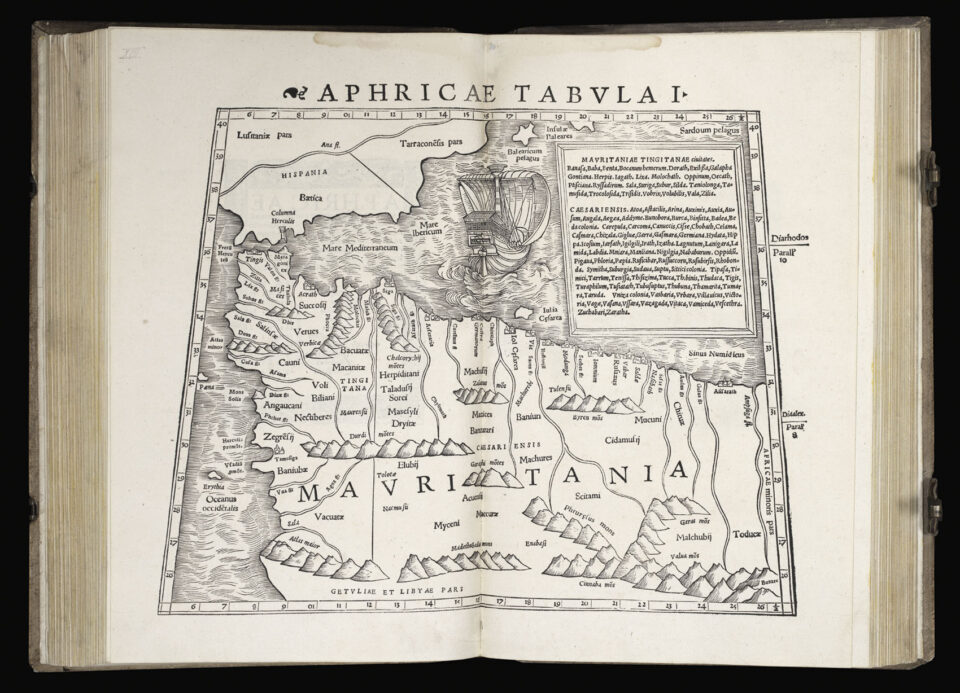