A fine copy of this fascinating work focusing on contemporary international affairs, including an unrecorded third part. As well as containing scarce maps including ​“the only German map of Boston [made] during the Revolutionary period” (Krieger and Cobb), it also includes a broadside detailing the most up-to-date sources on North America at the time. A primary source offering an opinion on the relevant merits of contemporary cartographic sources is exceptionally rare.

The text in the first two parts provides details of the history of the English in North America, followed by sections on British and French colonies and a brief summary of the origins of the American Revolution. The text in the third part, published two years later, provides information upon the Russo-Turkish War in the Crimea.

The first part contains a highly important map of Boston, based upon a map produced by the French royal geographer Jean de Beaurain in the same year, which drew in turn on the map of Boston prepared by J.F.W. Des Barres, a Swiss-born surveyor who made the famous ​‘Atlantic Neptune’ on behalf of the British government in America.
The map captures the beginning of the Siege of Boston, as the British army prepared to face George Washington’s Continental forces. Boston’s position on a narrow peninsula looked increasingly precarious. In an improvement over its French predecessor, the present edition makes a clear reference to the Battle of Bunker Hill ( June 17, 1775), noting the ​“Ruinen von Charles=town [sic]” Around the city, the placement of the respective forces is depicted with unparalleled accuracy, with the British troop lines highlighted in blue and the Continental troop lines in red. Washington’s forces are split into three divisions, with one placed at Cambridge, one at Charlestown Neck, and another above Roxbury. The observer will notice that the British commanders elected not to place troops atop Dorchester Heights. Washington later took this ground, giving him a distinct advantage over the British in the ensuing siege. The British were compelled to leave the city in March 1776.

The second part contains a map of Long Island, based on a map of the same area published by Thomas Jefferys in his West India Atlas of 1775, and another of North America, based on Rigobert Bonne’s two sheet map, which has been updated to show the results of the American Revolutionary Wars. The 13 independent colonies on the east coast are separated from the remaining British possessions in the north by a faint red line; Spain’s remaining territories, including Mexico, are outlined in yellow. It is accompanied by descriptions of each state’s history, major towns, system of government, exports and natural features.

The third part contains a map of North America showing the theatre of the American Revolutionary Wars, with the 13 colonies outlined in red. At the lower left is a table showing the distance between major cities, with a text below providing details on the territories named on the map. The second map is of the Crimea which was, at the time of printing, steadily coming under the control of Russia. It occupied a precarious position between the Russian and Ottoman Empires, and at the time of publication was struggling to form a supposedly independent government under Russian supervision. Five years after this map was published, Catherine the Great finally issued a manifesto annexing Crimea on the grounds that it had not provided the requisite spoils of war set out in previous treaties; in reality, it had become far too costly to prop up a puppet government in a strategically crucial state.

Finally, there is a very rare broadsheet, which lists details of British colonies in North America. The columns detail their geography, climate, exports, cities, and inhabitants, but of most interest is the final entry for each one. This lists the books and maps considered to be the most authoritative for that territory, suggesting the important role of cartography in the dissemination of information about current events.
It is fascinating to compare contemporary opinion with well-known maps today and, in general, see that they have stood the test of time. On the American side, Müller advocates Joshua Fry and Peter Jefferson’s map of Virginia and Maryland. Overall he recommends mainly British cartographers, including Captain John Montresor’s map of New York and Thomas Jefferys’ maps of New Jersey, Nova Scotia, and Florida, following his own advice by using Jeffery’s map as a basis for his plan of Long Island. This is unsurprising, given the vested British interest in having accurate maps of the Americas in a period when boundaries of empire were fought over on paper as well as on the ground. However, Müller’s choices also show that, in war, good cartography transcends the allegiance of its creator. The best map of Carolina is given as Henry Mouzon’s ​‘Accurate Map of North and South Carolina’. Henry Mouzon was a surveyor whose family fought on the revolutionary side during the American War of Independence, and his map was used by George Washington. This did not, however, prevent Sir Henry Clinton, the commander of the British armies, from using Mouzon’s map as well.

The first two parts, issued in 1776, are extremely rare. There are no auction records: Sabin notes the first part, but was evidently unaware of the existence of the second part; OCLC records only one example of this work, with both parts, in the New York Public Library. The third part is apparently unrecorded. We have not been able to trace either any institutional examples, or any examples coming to auction. 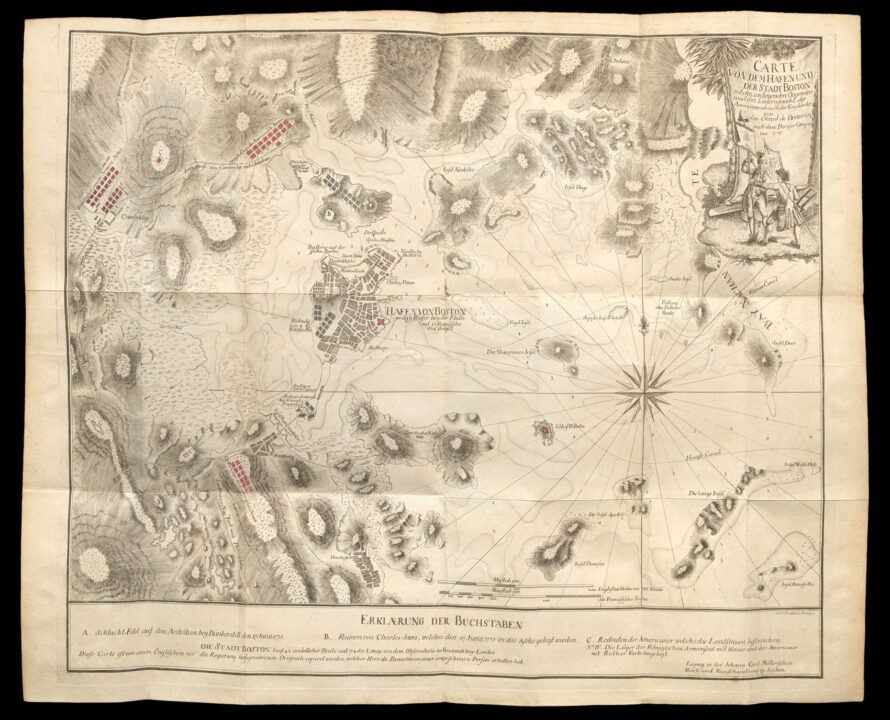 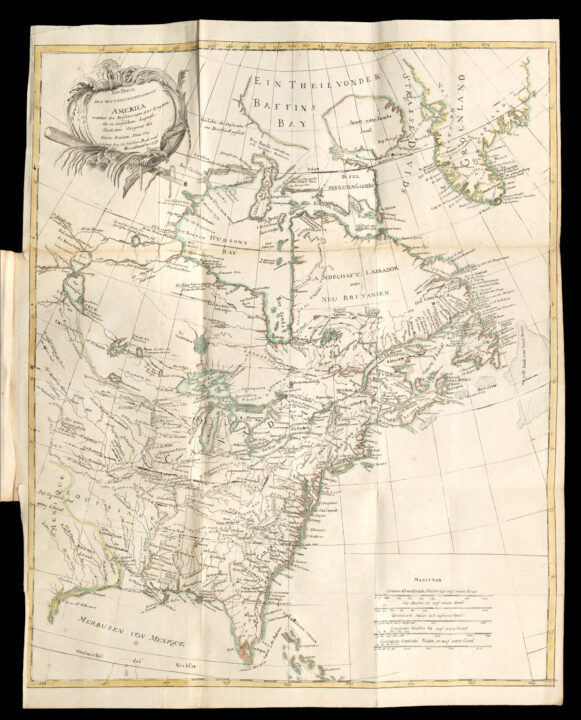 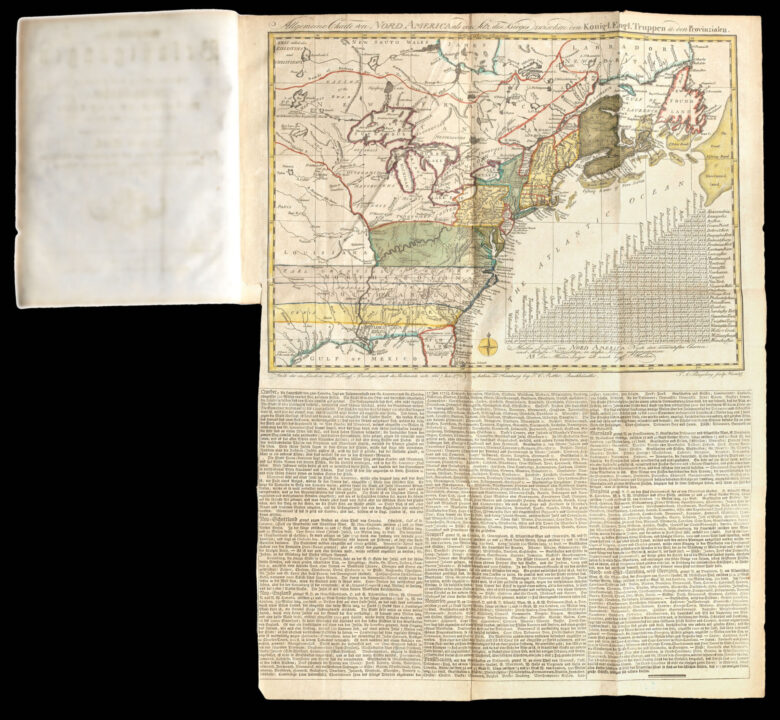 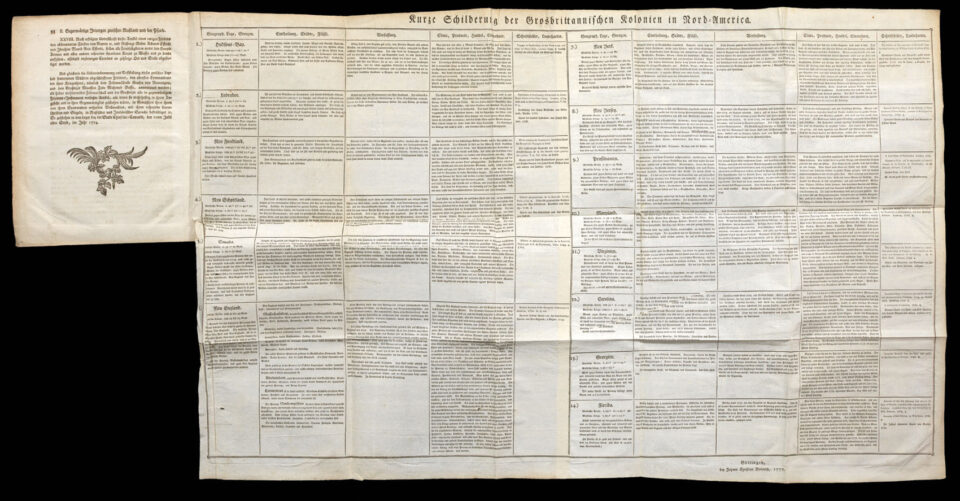