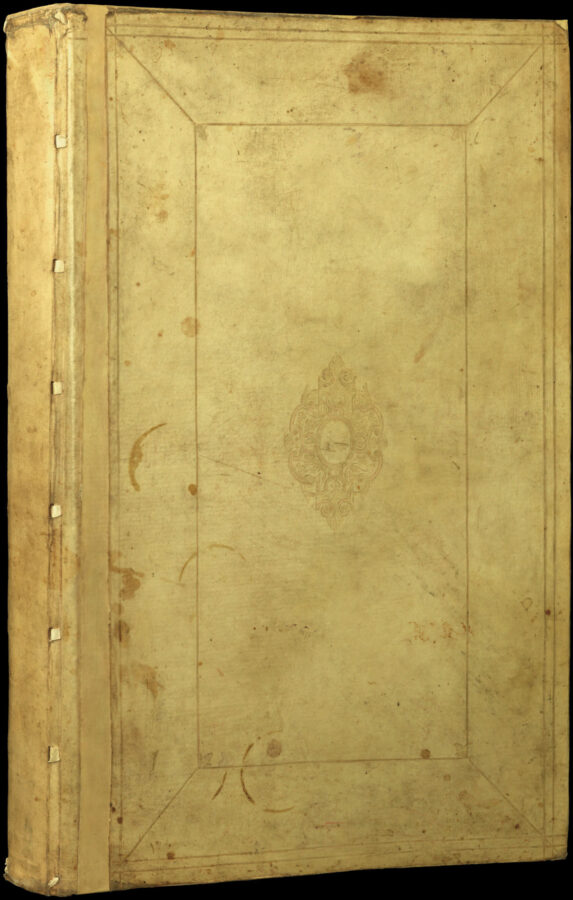 Atlas Or Fyrie Colom Wherein are lively Portrayed all the knowne Coasts of the whole Ocean. By Iacob Colom.

Jacob Colom ran a successful printing, bookselling, and chartmarking business in Amsterdam during the Dutch Golden Age. He is best known for his hugely successful pilot guide ​‘De Vyerighr Colom’. First issued in a folio format in 1632, the pilot, which detailed the western and eastern navigation, brought Colom into direct competition with Willem Blaeu, at the time the only other chartmaker active in Amsterdam. In response Blaeu issued his own folio pilot, the ​‘Havenwyser’, in 1634, in which he accused Colom of plagiarism. The attack seemed not to have affected Colom’s sales unduly, and whilst Blaeu abandoned his folio pilot – going back to his highly respected ​‘Zeespeigel’ – Colom’s work would continue in print for another 30 years. So successful was his pilot guide that it was not until 1663 that he felt the need to issue a new work: the ​‘Atlas of Werelt-Water-Deel’. Unlike his pilot guide, the atlas covered the whole world and was evidently a response to the sea atlases of Janssonius, Goos, and Donker.

The present example dates from 1668, and contains 51 charts. Of particular note are the chart of the southern Atlantic, the two sheet chart of the Indian Ocean, and the seven charts that cover North America. Many of the maps are decorated with a glowing column, both a play on Colom’s name and a symbol of wisdom deriving from Biblical references to the Temple of Solomon.

The chart of the southern Atlantic was first published as the south eastern sheet of Colom’s separately issued wall map of c.1655, ​‘Dese Vassende=Grade=kaert’, which was based upon Blaeu’s seminal ​‘Paskaert’ of c.1630. The plate is beautifully engraved with numerous mermen and merwomen frolicking in the surf, and the lower quarters of an elephant in Saharan Africa. Another rare (previously separately issued) chart is Colom’s ​‘OostIndische Pas-Caart’: Shilder lists only two examples of this state, and praises the chart for its ​‘summary of discoveries made in Australia before Tasman’. Finally, seven charts cover North America, all of which, according to Burden, are rare, although he makes particular note of the untitled chart of New England. This, he states, ​“depicts the region at one of the most important stages of English colonial history”, as just a year later the English would capture New Amsterdam from the Dutch and rename it New York, an act that would cement ​“the English control over the area from Carolina to Massachusetts”.

The atlas is very rare. Koeman does not record an English edition, and we were only able to trace three institutional copies: those in the Lilly Library, Indiana University; Cambridge University Library; and the University of Michigan. We are also unaware of any edition with English text coming up for sale in the past 30 years. 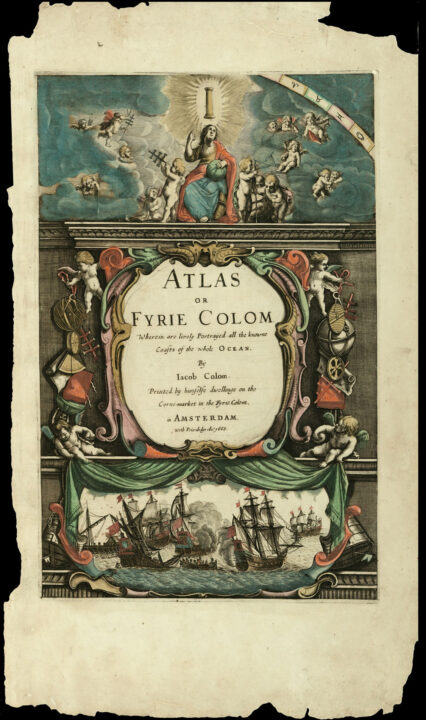 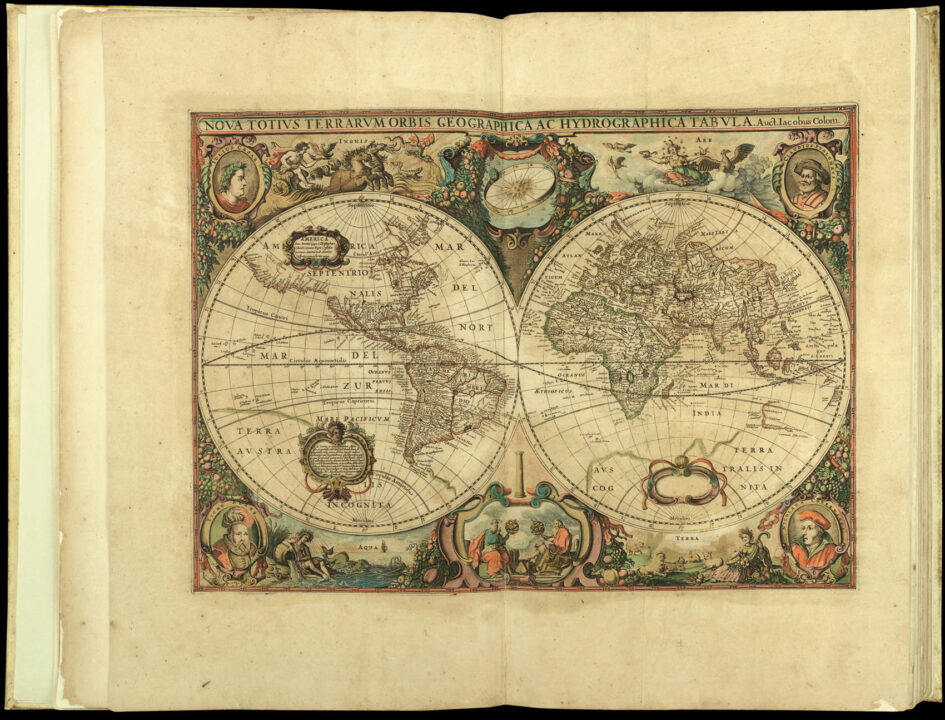 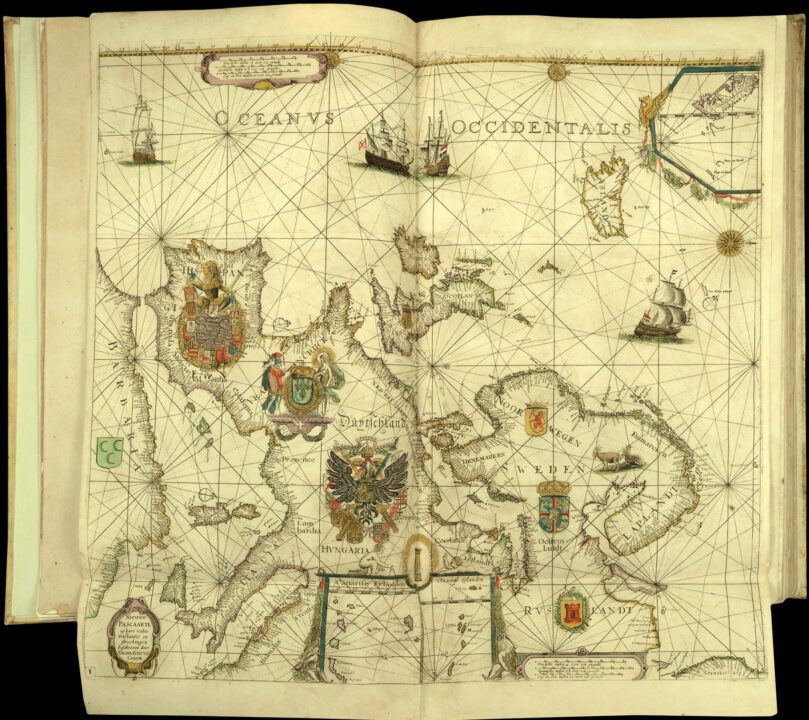 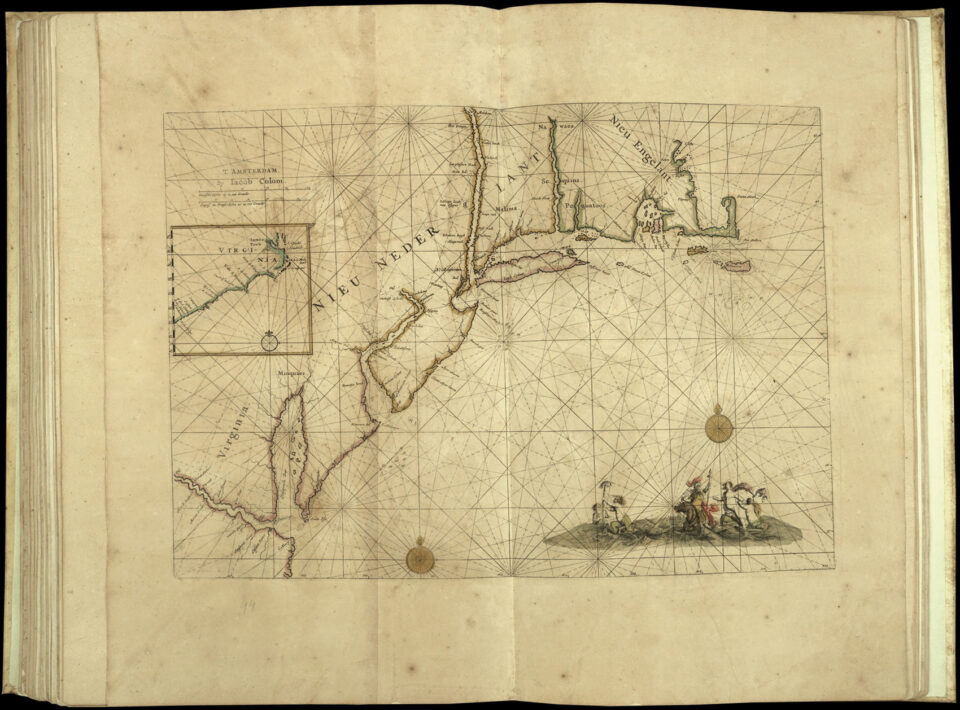