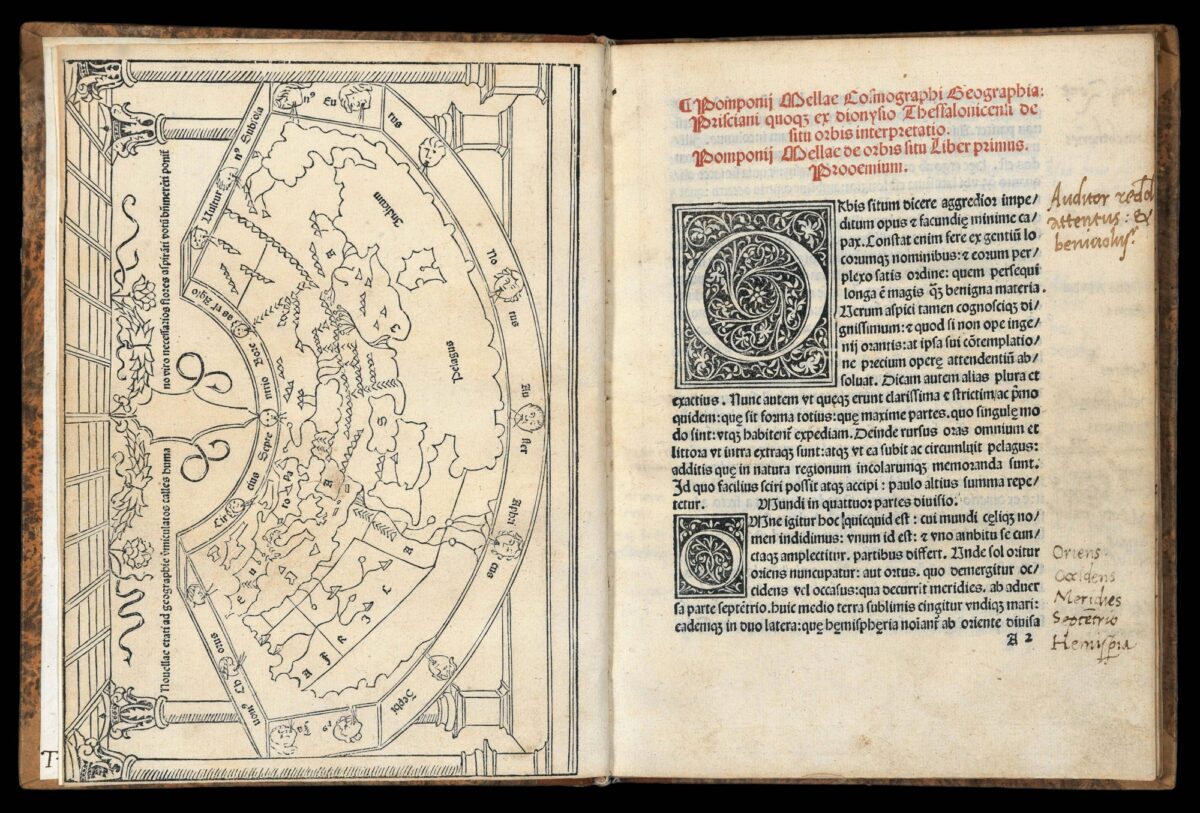 ‘If, in a new lease of life, a man seeks to attain the worm-like paths of geography, he is bound to find the flowers that belong there, for he deserves them’

“The second woodcut map printed in Italy” (Campbell p.119). This was the first map to depict current Portuguese knowledge of the west coast of Africa which led, only six years later, to the rounding of the Cape of Good Hope. Campbell suggests that the edition’s printer, Erhard Ratdolt, may have been the mapmaker, since this and his T‑O map of 1480 are the two earliest woodcut maps printed in Italy.

The title of the map ​“Novelle etati ad geographie vmiculatos calles humano viro necessaries flores aspirati votu bnmreti ponit” translates as: ​“If, in a new lease of life, a man seeks to attain the worm-like paths of geography, he is bound to find the flowers that belong there, for he deserves them”.

Published in the same year as Lienhart Holl’s celebrated ​‘Cosmographia’, Mela’s world map similarly includes additions to the Ptolemaic model. One of the more obvious changes is the addition of Scandinavia, and for the first time, the Orkney islands, off the northeast coast of Scotland, appear on a map. ​“In other respects, the map is unsophisticated, taking more care to identify wind heads than geographical features. Only the three continents and the Indian Ocean are named. The remaining lettering forms part of the Latin inscription above the map” (Campbell).

Mela’s map was cited with other early texts, including those by Macrobius, Ptolemy, Pliny and Aristotle, as part of the reading background of Christopher Columbus: ​“In its consideration of the oceans, this work would not have been particularly useful to Columbus, but in his view of the earth, Mela raised the probability that the southern hemisphere was inhabited, a novel idea for Christian believers in the biblical version of the Creation, … ” (‘The Manifest’, James Ford Bell Library).

Pomponius Mela (fl37-42 AD), born in Spain and one of the earliest Roman geographers, lived during the reign of Emperor Claudius, c40AD. His ​‘Cosmographia’ was circulated in manuscript, and from the early fifteenth century, sometimes with a map. It was first printed in 1471, without a map. His was the ​“only formal geographical treatise in classical Latin” (Campbell). The ​‘Cosmographia’ expressed concepts that were similar to those of the leading Greek geographers, yet the map which accompanies this 1482 edition expresses the current school of thought, rather than Mela’s own.

According to Wilson, the Mela map was the model for Hartmann Schedel’s world map in the ​‘Nuremberg Chronicle’ “… Within its novel architectural framework, the map is drawn on a conical projection, a modification of the Ptolemaic type. The text, a motto, the Latin names of the winds represented by ​‘wind-heads’ surrounding the map, and the legends are provided in letterpress. The map shows Europe, Asia (including Ceylon, that is drawn with a bay shaped like a keyhole), and a large part of Africa. Notable is the depiction of the Nile, with its sources in the mountains south of two lakes, which correspond in their location to those today called Lakes Albert and Victoria Nyanza. The mountains are also depicted on other maps and are called the Mountains of the Moon”. 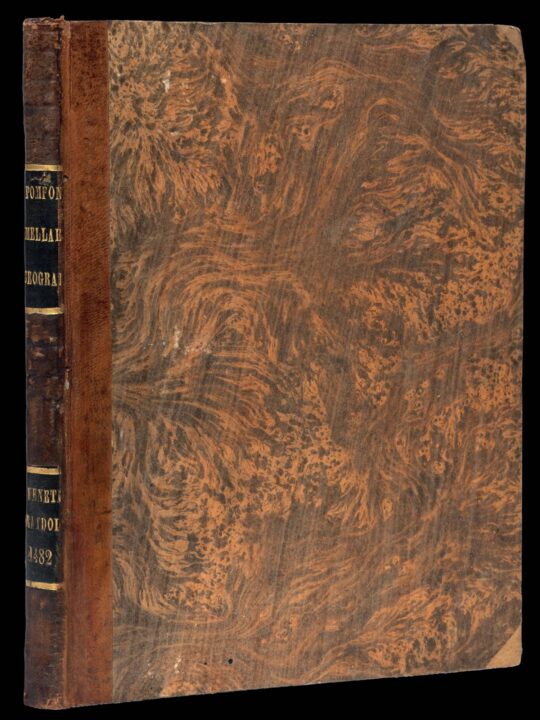