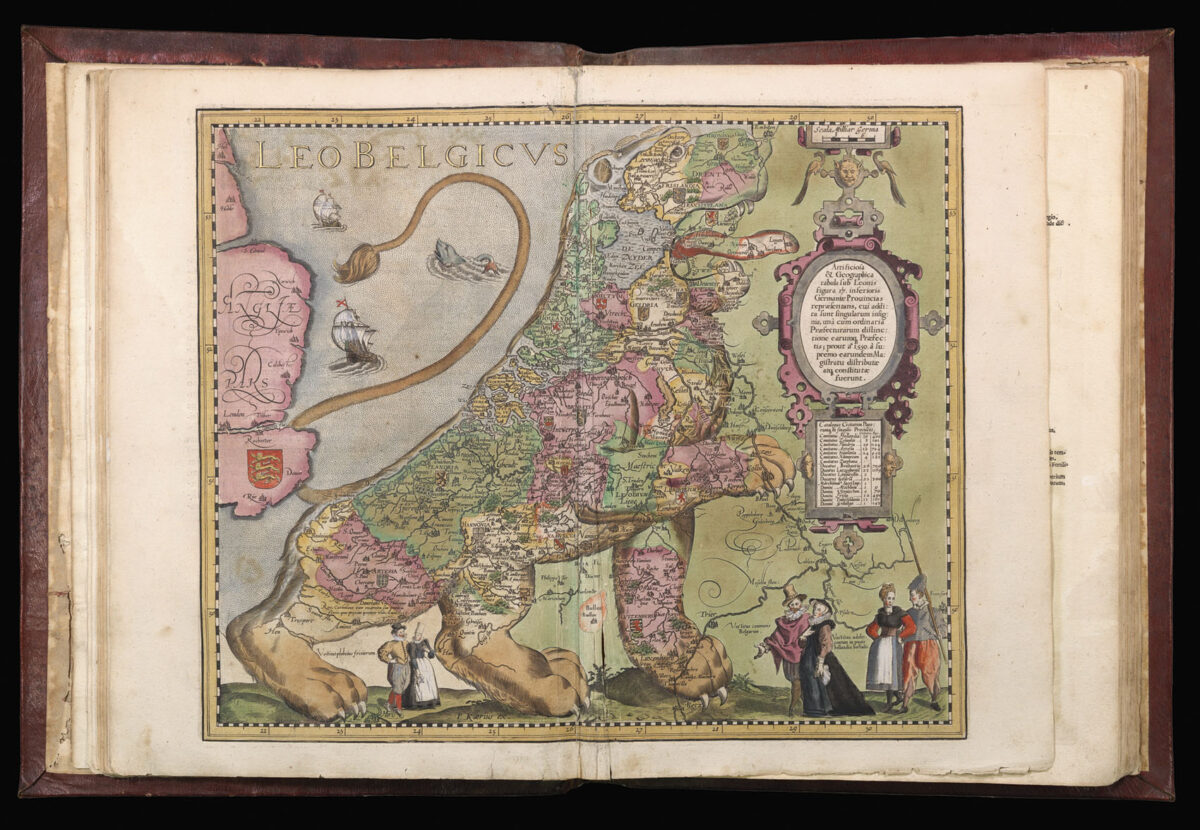 A magnificent example of the first edition of the first folio atlas of the Netherlands, beautifully coloured and highlighted in gold.

Pieter van der Keere dedicated the atlas of the Netherlands to the States General of the United Provinces. The text was written by Van der Keere’s brother in law Petrus Montanus, while Petrus Scriverius, Daniel Heinsius and Petrus Bertius contributed with an introductory elegy and Latin and Greek poems. Van den Keere’s maps were not entirely original. Some, including the famous Leo Belgicus, were printed from revised copperplates purchased a few years earlier at the auction of Cornelis Claesz. Others were inspired by maps by Abraham Ortelius, Gerard Mercator and Jodocus Hondius. The value of these maps of the provinces did not lie in their geographical originality but in a skilful mixture of exceptional engraving with a standardized way of showing town views and costumed figures, within the concept of the first national atlas.

The Lion map is the third incarnation of the Aitzinger form of the Leo Belgicus: the lion rampant facing right, with the right paw raised. The text to the verso acknowledges the lion’s pedigree. Below the lion are depictions of Benelux nobility and gentry, and to the right, in an elaborate cartouche, the following text:

The map was not in fact the work of van den Keere, but of Hendrik Floris van Langren, whose imprint can sometimes be faintly seen upon the map. It would appear that van den Keere purchased the plate sometime after 1609, as van Langren is known to have lived and worked in Amsterdam up until that date. One should also note the cartouche text is almost identical to the language used in van Doetecum’s work, even though Langren’s map does not depict any of the governors.

As usual in the first issue, this copy of the atlas does not include the Ubbo Emmius/​Cornelis Claesz. map of East Friesland. After assembling and issuing a few copies Van den Keere decided to still include this map in the atlas, although he did not have an accompanying text available and it is not listed in the contents. In the later issue this map is often inserted between pages 80 and 81, or pages 86 and 87. In the second Latin edition of 1622 the map of East Friesland has text on the back and has been put at the end of the atlas, with the page number 93, and signature Nn. After 1623 the plates were sold, probably to Claes Jansz. Visscher. They resurfaced in many similar atlases that were to follow. 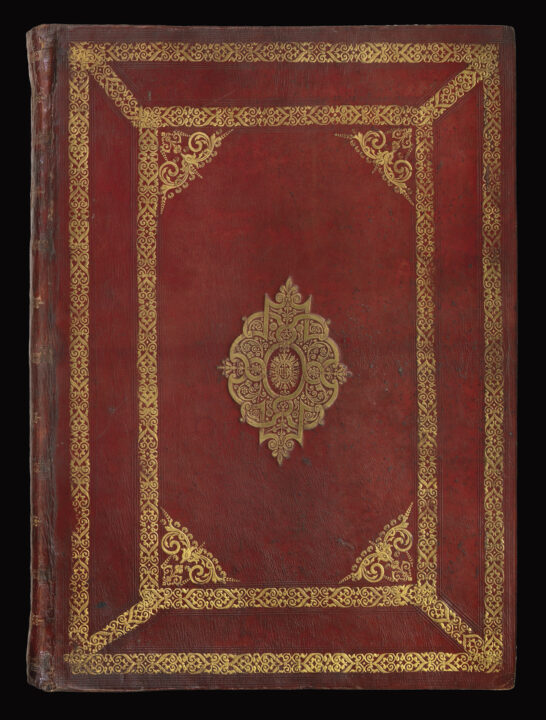 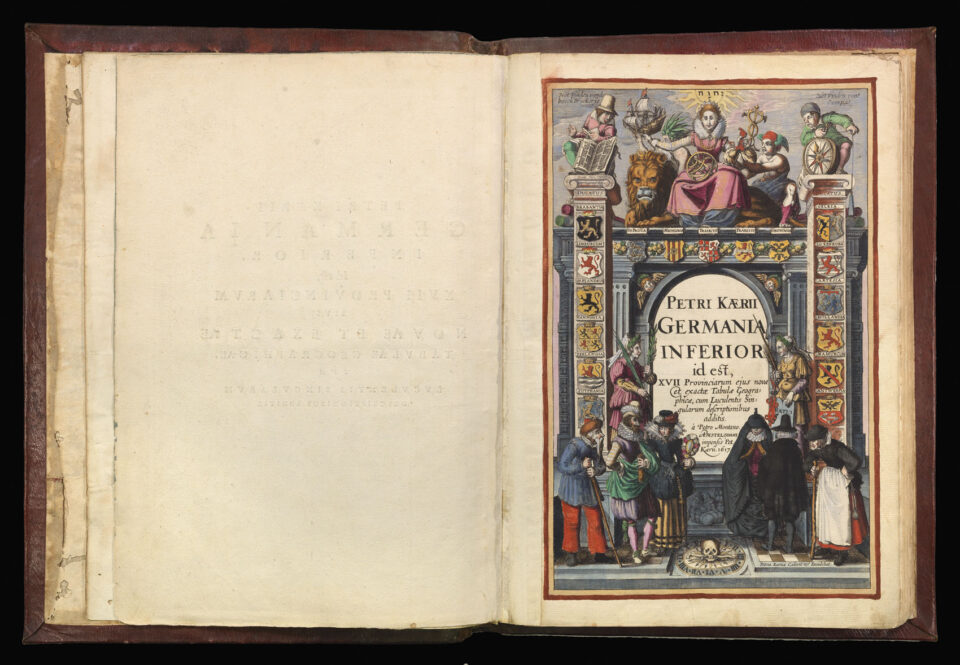 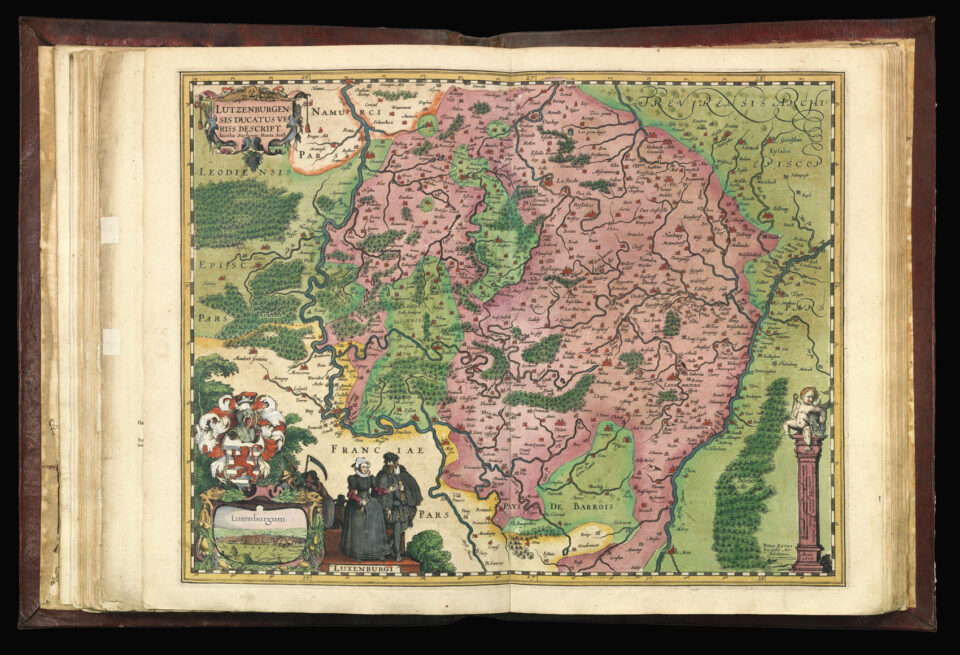