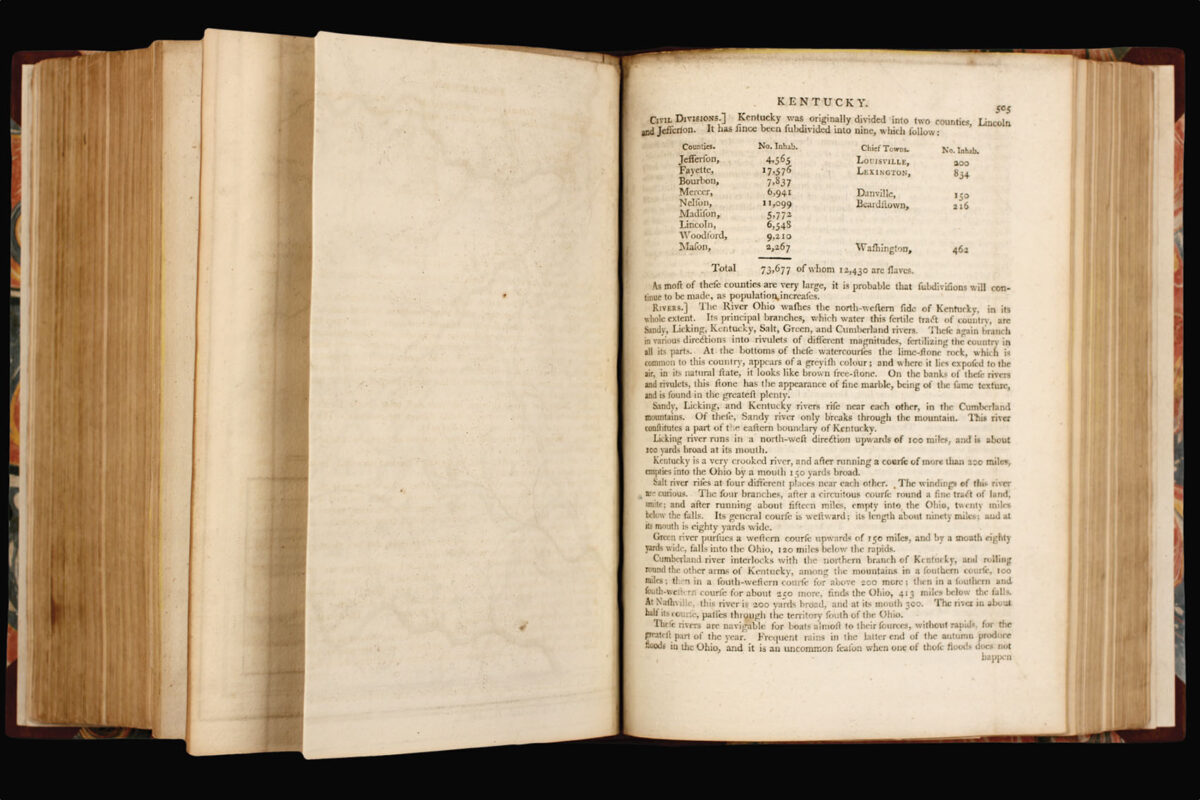 The American Geography; or, a view of the present situation of the United States of America containing … A particular description of Kentucky, the Western Territory, the Territory South of Ohio, and Vermont … with a view of the British, Spanish, French, Portuguese, and Dutch dominions, on the continent, and in the West Indies, and of Europe, Asia, and Africa … A new edition

The first American Geography, special issue with twenty-five maps, including the celebrated Filson map of Kentucky, dated November 23rd 1793. Most examples of this edition of Morse’s ​“Geography” were issued with only three maps. Of the 25 maps, 18 are of states or slightly larger areas of the United states, and only one, of new discoveries around the Globe, is not specifically tied to the Americas.

The folding maps are:

​“A Map of the Northern and Middle States; comprehending the Western Territory and the British Dominions in North America from the best Authorities”;

​“A Map of the States of Virginia, North Carolina, South Carolina and Georgia; Comprehending the Spanish Provinces of East and West Florida…”;

​“Map of Virginia Maryland and Delaware”;

​“A Map of North Carolina from the Best Authorities”;

​“A Map of South Carolina from the Best Authorities”;

and ​“A Map of the West Indies from the Best Authorities”.

Joseph Purcell’s map of Virginia, the Carolinas and Georgia, is an uncommon map of the early Southeast and is important for showing a well defined New State of Franklin, within the borders of North Carolina. In 1785, settlers in present-day western North Carolina and eastern Tennessee organized a state government to be named in honor of Benjamin Franklin. Congress turned down their appeal but the state maintained a legislature and governor until 1788. This ephemeral state appeared on a small number of maps into the early part of the 19th century. The map shows early settlements, including a Moravian Settlement in North Carolina, and the Cumberland Settlements in present-day Tennessee. The map also notes native tribes and various Bounty Land Grants lands along the upper Mississippi River.

The map of the Northern and Middle States which describes the area from Maine (Province of Main), south to Virginia, extends west to the Great Lakes and the confluence of the Ohio and Mississippi Rivers, and north to eastern Canada up to James Bay. There are several Bounty Land Grants including Genl. Clarks, Donation Lands from the Commonwealth of Virginia, and Ohio Company in Ohio, and Wabash Company, New Jersey Company, and Illinois Company in Illinois. This is the first edition, with information taken from Amos Doolittle’s map of the same title. Engraved by G. Allen Sanders, Wells Row, Islington and published by Stockwell as noted above.

Filson’s celebrated map of Kentucky is one of the key cartographic landmarks of the Trans-Allegheny frontier. It is essentially unprocurable in the American first edition published in Elizabethtown, New Jersey in 1789, and was not contained in the first London edition of Morse’s ​“Geography”.

In early 1784 Filson produced the first written history of Kentucky, he ​“employed Philadelphia engraver Henry Pursell and printer Ternon Rook to produce a map Filson had drawn to encourage settlement of Kentucky. Composed primarily from secondhand accounts of Boone and other explorers and Filson’s own knowledge of the region, the map is well drawn but not completely accurate. It depicts the state’s rivers and creeks, mountains and hills, towns and forts, and canebrakes, and clearly marks the location of the land surveyor’s office. As was the cartographer’s intention, the map conveys a sense of civilization and progress.” (Charles C. Hay for ANB).

Morse’s text provides extensive geographical information for each state and province, including the western territory and the Spanish dominions of Louisiana, Florida, New Mexico and California, as well as on the major countries and regions of the world.