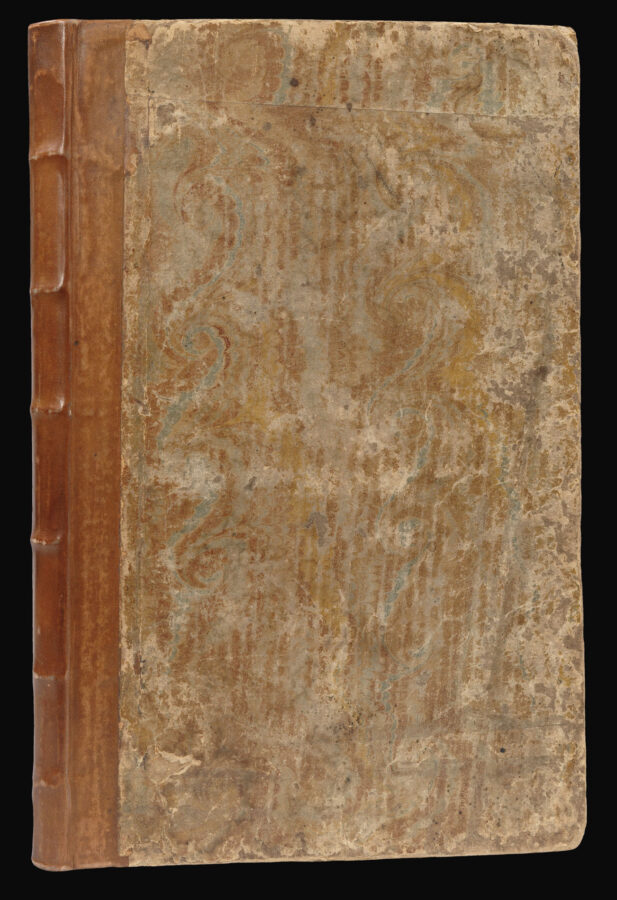 A Bill in the Chancery of New-Jersey at the Suit of John Earl of Stair, and others, Proprietors of the Eastern-Division of New-Jersey; against Benjamin Bond, and some other Persons of Elizabeth-Town, distinguished by the Name of the Clinker Lot Right Men. With Three large Maps done from Copper-Plates to which is added; The Publications of The Council of Proprietors of East New-Jersey, and Mr. Nevill’s Speeches to the General Assembly, Concerning the Riots committed in New Jersey, and The Pretences of the Rioters, and their Seducers

This Bill, one of the most complicated and notorious set before the court of Chancery, was so protracted that it was not settled before the events that brought about the Revolutionary War were set in motion, and was subsequently forgotten. It has its origins in the conflicting way in which the victorious Duke of York, who had received New Jersey as a reward from his brother King Charles II for wresting New York from the Dutch in 1664, then gave it to Sir George Carteret and Lord Berkley, at the same time as his legal representative, the new English Governor, Richard Nicholl, approved the purchase of some land around Elizabethtown in New Jersey from the Leni Lenape Indians by local settlers.

Over time Carteret and Berkley sold shares in their land to investors, who together became the Proprietors of New Jersey. Decades later, the long-standing dispute over who should pay what taxes, and to whom, in the area of Elizabeth, reached a head. The now thirty-nine Proprietors, including John, Earl of Stair, of the Eastern Division of New Jersey brought about this suit against about four hundred and fifty resident settlers, the ​‘Elizabethtown Associates’, rather derisively known as the ​‘Clinker-Lot-Right-Men’ in the Bill, led by Benjamin Bond.

The Proprietors’ case was prepared by James Alexander (c1690-1756), regarded as the most prominent lawyers in New Jersey, and one of the best attorneys in New York. He had been surveyor-general of East Jersey, West Jersey and New York, and in 1719 he was appointed commissioner to survey the boundary between New York and New Jersey. He became a councillor in New York in 1721 and in New Jersey in 1722, when he also became attorney-general of New Jersey. Streeter records that his ​“exposition of the proprietors’ case… is of great subtlety and complexity and is one of the most remarkable documents of colonial times”.

The maps were drawn by Lewis Evans (c1700- 1756), cartographer and important American geologist. From 1736, he was a surveyor and mapmaker in Philadelphia, is known to have bought books from Benjamin Franklin, and probably drew maps for him too, although his first known map, of a small area of Pennsylvania, was printed in 1738. The colonial governor Thomas Pownall was also his patron. In 1743, Evans accompanied celebrated American botanist-naturalist John Bartram on an expedition from Philadelphia across the Appalachians to Lake Ontario.

The three maps that accompany the Bill, are a precursor to his ​‘A Map of Pennsylvania, New-Jersey, New-York, and the Three Delaware Counties’, 1749, and the very rare ​‘A General Map of the Middle British Colonies in America’, 1755. That map was used by British general Edward Braddock in the French and Indian War, and was used frequently as an authority in boundary disputes.

They comprise:
​‘Map I’ of the middle British colonies from Boston Harbor to Cape Hatteras and inland to Albany and the Susquehana River, the decorative cartouche provides a key to place-names in English and Dutch, and a coloring guide; ​“Engraved & Printed by James Turner near the Town House Boston”.

​‘Map II’ of New Jersey, ​‘Part of Pensylvania’ and ​‘Part of New York’, extending to the Hudson River and beyond, showing New York City; with an elaborate cartouche and engraved by James Turner ​“Where all Sorts of Engraving are done after the best Manner and at the most reasonable Rates”.

​‘Map III’, on 2 sheets, joined, of the disputed area bounded by the Raritan River in the south, ​‘The Sound’, Hackinsack Bay and the shores of Staten Island in the east, and the North Mountains, and the line settled with the Penns in 1741, on a grid which shows individual properties; with an elaborate cartouche giving the scale and stating that this map too was engraved by James Turner.

Benjamin Franklin (1709–1790), from whom ​“a few Copies are to be Sold…, in Philadelphia; Price bound, and Maps coloured [as here], Three Pounds; plain and stitch only, Fifty Shillings, Proclamation Money”, amongst many other achievements too numerous to mention, revolutionised the printing industry in America. He introduced a system of commercial partnerships, or franchises, like the one here, with James Parker for this Bill. It was a generous and sometimes profitable scheme. He gradually established more than half a dozen printing partnerships before retiring from printing in 1748. 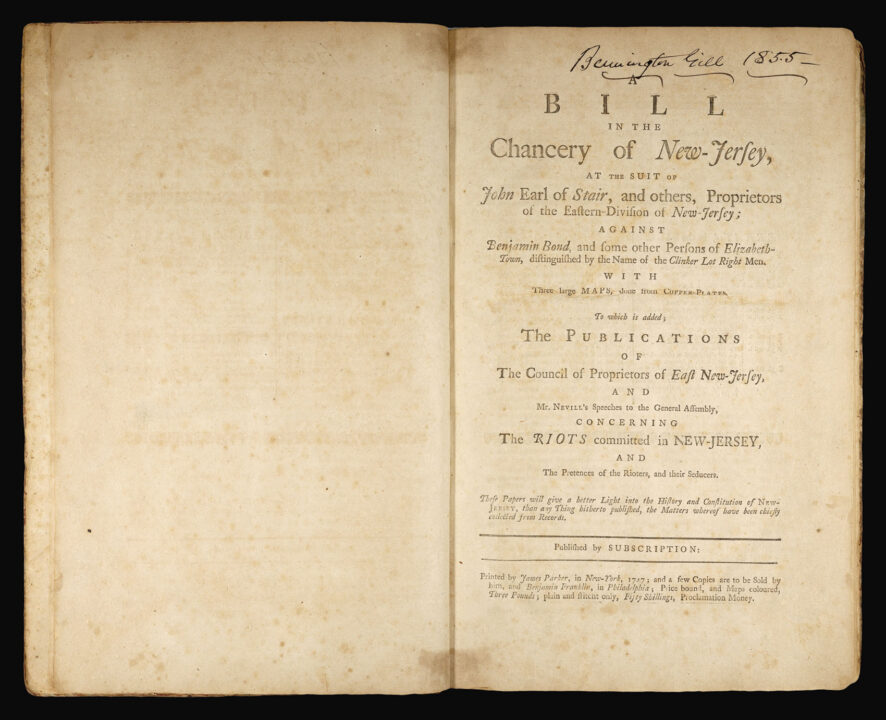 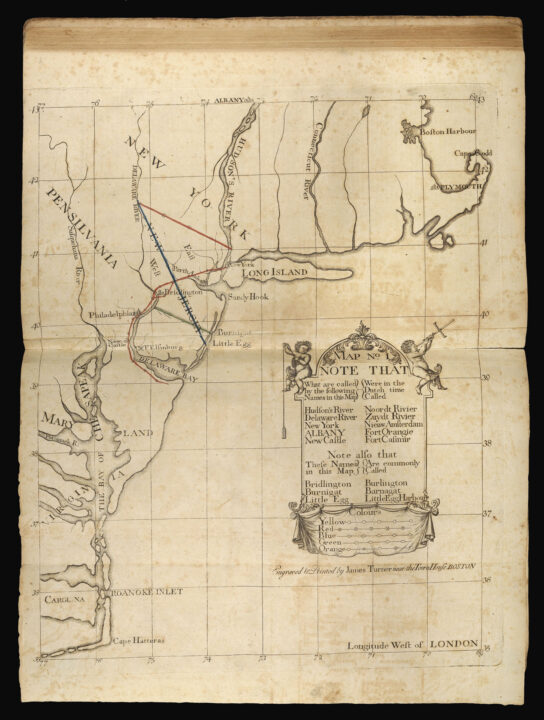 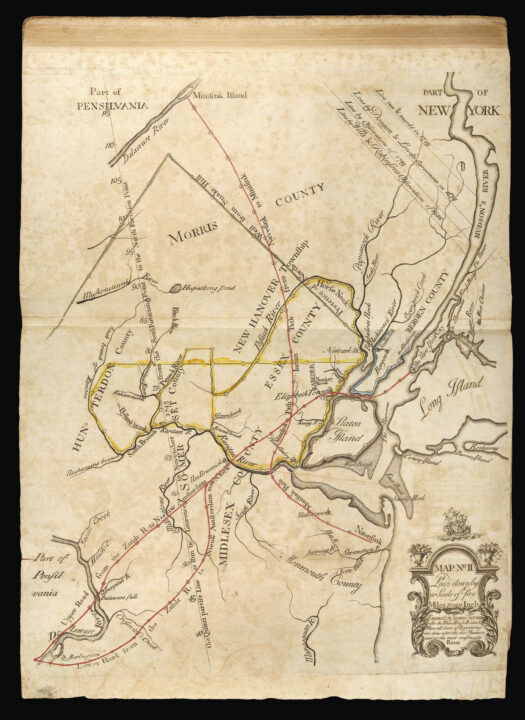