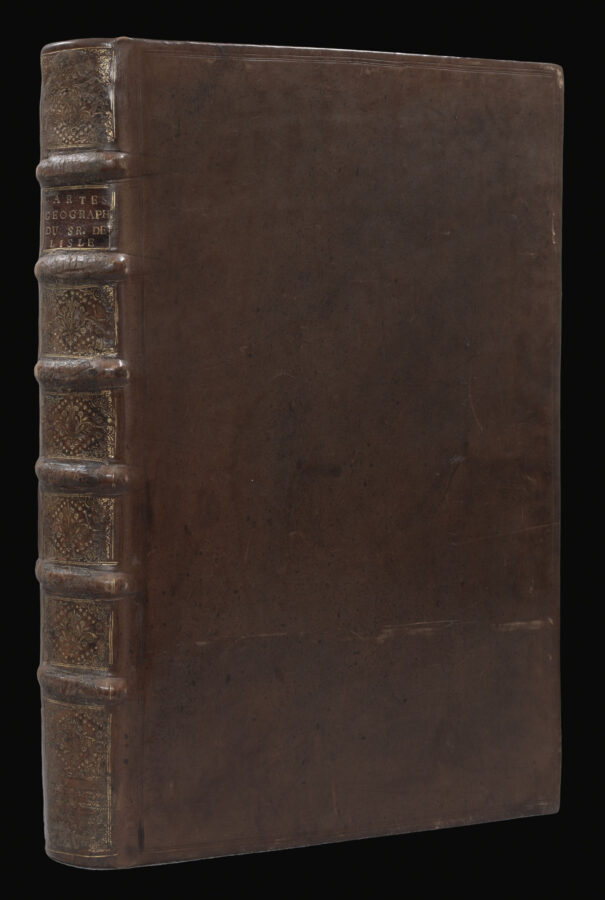 Rare composite Delisle atlas.
The core of the atlas is a group of 96 large engraved folio maps published by Guillaume Delisle, which range in date from 1700 to 1725. The layout and contents bears similarity to two untitled atlases in the British Library (Shirley T.DEL-1b and T.DEL-1c), which contain 80 and 94 maps respectively, and although the group of printed maps of the Americas (all of which are present here in their rare first or early states) makes the work an important piece of Americana. The atlases has been augmented with three manuscript maps devoted to Canada, and Cassini’s map of the Paris Meridian:
1. Plan of Montreal circa 1705 – the third extant plan of the city.
2. Chart of the St Lawrence River from Montreal to Quebec by Delisle – the most detailed chart to be produced at the beginning of the eighteenth century.
3. Map of Mont-Louis on the Gaspé Peninsula by Delisle.
4. Four sheet map of the Paris Meridian by Cassini.
The work also includes several smaller maps by Delisle, and the complete text relating to Delisle’s plagiarism case against Jean Baptiste Nolin.
1.Plan of Montreal
[Anonymous] [Title to pasted on key below plan] Nom des Maisons principalles de la ville de Montreal en Canada.
[?Montreal, c1705].
Manuscript plan, with full wash colour, a few tears to right of plan, key with some loss to right side, skilfully repaired and not affecting text, right side strengthen with later paper, a few minor areas of dampstaining to the river.
Dimensions: (map) 360 by 240mm (14 by 9.5 inches).

Scale: 17 toises to 1cm (approx.) 33m to 1cm.
Watermark: (to key) similar to Heawood — 2728 – horn in shield with crown, number ​‘4’ and letters ​‘WR’ below – example from Cardin letter at RG, date 1699–1700. Watermark to plan indistinct.
The manuscript plan of Montreal present here, drawn in around 1705, is the third extant plan of the city, the second to name the settlement Montreal, and the first to show buildings in birds-eye view, and buildings to the south of the river St Pierre.
To provide some context to the plan a brief discussion of the earlier plans of the city is necessary.
The 1685 Denonville Plan
The earliest extant plan of the city, now housed in the Archives nationale d’outre-mer (ANOM) France, was drawn in 1685 and bears the inscription ​“enoyé par Mr. Denonville le 13 novembre 1685”. The Marquis de Denonville was governor of New France from 1685 to 1689. The plan, titled ​‘Villemarie dans l’isle de Montreal’, depicts the colony just over 40 years after it was founded by the Société Notre-Dame de Montréal. The town is still remarkably small (the census of 1685 only lists 119 residence) and attests to the extreme difficult that the French had in establishing a permanent base on the island. The plan is dominated by Notre-Dame church which sit northwest of the main square, today’s Place d’Armes. A few houses dot the four main roads (Saint-Paul, Notre-Dame, Saint Francis, and Saint-Joseph) which all meet at a crossroads and link the church square with the market place, today the Palace Royal.
The 1704 Levasseur de Néré’s plan
The second extant plan, drawn in 1704 (also housed in the ANOM) is attributed to the French mapmaker and engineer Levasseur de Néré who worked in New France between 1693 and 1712. The plan reveals the sizeable expansion in both area and population over the previous twenty years, with the population estimated to be between 1,600 and 2,000. The reason for this dramatic increase in population can be put down to an influx of immigrants from France, who had been drawn to the colony, which had by that time become the centre of the French fur trade in the west, and an important military base.
Notre-Dame church maintains is dominant position and is now almost completely surrounded by a cemetery. The Hotel Dieu, to the south of the church, has been greatly expanded with new outbuildings added; the Sisters of the Congregation, dedicated to education, have established their convent on the new Saint-Jean-Baptiste street; with the Jesuits and the Récollets, true to their rivalry, building monasteries at opposite ends of the town. The town is now surrounded by a large palisade with bastions and curtains, which would later, in the 1720s be replaced by a stone wall. Even with all this construction work, almost two thirds of the city landscape was made over to cultivation. A key to the plan lists 10 civic and religious buildings, and also the palisade.
Anonymous plan circa 1705
The present plan bears great similarity with Levasseur de Néré’s. The general layout of the city is the same, with the palisade depicted surrounding the town, and all the major civil, religious, and military buildings named.
However, there are some notable differences, firstly and most obviously all the major buildings are illustrated in birds-eye view or elevation, the earliest depictions of buildings on any plan or view of the city. Furthermore the plan illustrates, for the first time, three buildings to the southwest of the city, on the south bank of the Riviere St Pierre: the Hôpital general des frères Charron, a hospital set up in 1695 to care for the poor; the house of Louis Hector de Callière, the governor general of New France from 1698 until his death in 1703; and the chapel of St Anne. As well as naming the house of the former governor general, the plan also marks the location of the then governor, Philippe de Rigaud, Marquis de Vaudreuil, who held the post from 1703 to 1725; and also the governor of Montreal Claude de Ramezay, who had taken over the post in 1704 when Vaudreuil had been made governor of New France.
The marking of Ramezay’s house is key to dating the plan. On being made governor Ramezay acquired new land to the northeast of the city. In 1705, he employed the stone mason and architect Pierre Couturier to construct a residence fit for the governor of the town. The chateau, which was completed in the same year, would be the grandest private residence in Montreal, and would, most importantly, outshine the residence of Ramezay’s great rival Vaudreuil, marked by a letter ​‘L’ on the plan. The chateau still in existence today and was the first building to be designated an historic monument by the government of Quebec in 1929.
The plot which surrounds the chateau is, unusually, demarcated by a solid line, all other residential plots being depicted by a dotted line. The reasons for this are unclear, however, it is conceivable that either the house was surrounded by a wall, or it was done in order to draw attention away from the house to its left, marked by a letter ​‘K’. Curiously the letter ​‘K’ does not appear on the attached key below the plan. One explanation would be that it marked Ramezay’s former residence (the house is present on Levasseur de Néré’s plan of 1704), and when the chateau was complete, the reference was no longer necessary.
Later manuscript plans would be drawn up by Gédéon de Catalogne (1662–1729) in 1713, showing the city expansion to the northeast to include the chapelle du bon secours, and Gaspard-Joseph Chaussegros de Léry plan of 1725. The first printed plan of the city would be published, by Moullart-Sanson, in the same year, after Catalogne’s plan of 1713.
2. Delisle’s chart of the St Lawrence
DELISLE, Guillaume Carte du cours de la grande riviere de st. Laurens depius Quebec jusqu’à Montreal. Par Guillaume Delisle de l’academie royale des sciences 1706.
Manuscript map in pen and ink, with wash colour.
Dimensions: 493 by 690mm (19.5 by 27.25 inches).
Scale 1 lieue (league) to 1cm. (approx.) 4km to 1cm

Delisle understood the strategic importance of the Mississippi Valley and also recognized that little was known of the geography north of the Gulf of Mexico. Therefore, when compiling information on the area, he studied the routes taken by earlier explorers such as Hernando de Soto, Ren.-Robert Cavelier, sieur de La Salle, and Pierre Le Moyne, sieur d’Iberville. Delisle also relied on information gleaned from more recent expeditions such as those of Louis Juchereau de Saint Denis and the reports of missionary Francois Lemaire.
Delisle was the first ​“modern” mapmaker to attempt to trace de Soto’s route. The second exploration recorded on his map was La Salle’s of 1684. La Salle’s failure to locate the mouth of the Mississippi was one of concern to the French king and made him hesitant to sponsor another expedition. Nevertheless, d’Iberville persuaded Louis XIV to persist. He sailed from France in 1698, successfully located the entrance to the Mississippi, and erected a fort on Biloxi Bay. In 1714, Saint Denis led the
final French expedition illustrated by Delisle. The explorers made their way well into Texas, penetrating the Spanish missions there. Saint Denis made a second journey up the Rio Grande in 1716. He built the important post of Natchitoches in present-day Louisiana, which Delisle included on the map. Delisle also located Mission de Los Teijas establie in 1716 near the Trinity River in eastern Texas, the first appearance of the name Texas in any form on a printed map.
Despite Delisle’s controversial territorial claims on behalf of France, British cartographers recognized the importance of the geography he depicted and were quick to incorporate his work into their own. ​‘Carte de la Louisiane et du Cours du Mississipi’ became a primary resource for the American Southwest for many years.
Tooley 43, first state.
3. Carte du Canada, 1703:
The first map to name Detroit, just two years after the founding of the settlement by Cadillac. A great deal of the map is based on Franquelin Joliet’s expeditions (1673- in New France, which covered the northern parts of the Mississippi and the Great Lakes as well as New Foundland and Labrador.
To the lower left Delisle records the speculative explorations of the Baron Louis Armand de Lahonton. Lahonton (1666–1715) was a French military officer commanding the fort of St. Joseph, near modern day Port Huron, Michigan. Abandoning his post to live and travel with local Chippewa tribes, Lahonton claims to have explored much of the Upper Mississippi Valley and even discovered a heretofore unknown river, which he dubbed the Longue River. This river he claims to have followed a good distance from its convergence with the Mississippi. Beyond the point where he himself traveled, Lahonton wrote of further lands along the river described by his guides. These include a great saline lake or sea (ghosted in here) at the base of a low mountain range. This range, he reported, could be easily crossed and from this point further rivers flowed westward to the mysterious lands of the Mozeemleck, and presumably the Pacific. This would have intrigued both the French and the English who were disparate to find a suitable route to the Pacific in order to trade their furs and other products with China and the Far East.
Tooley 35 first state. 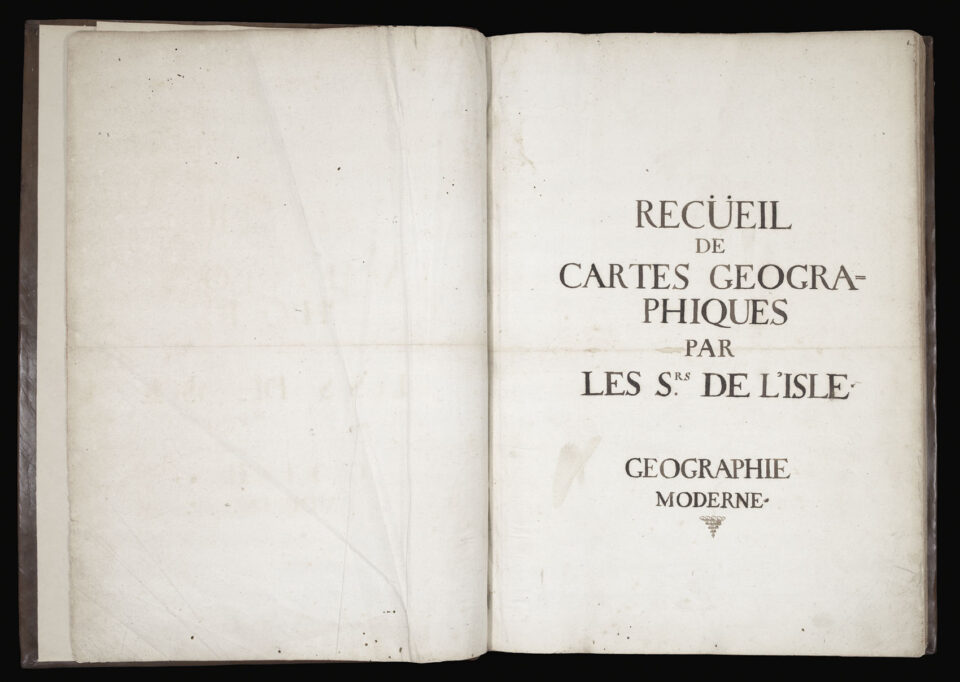 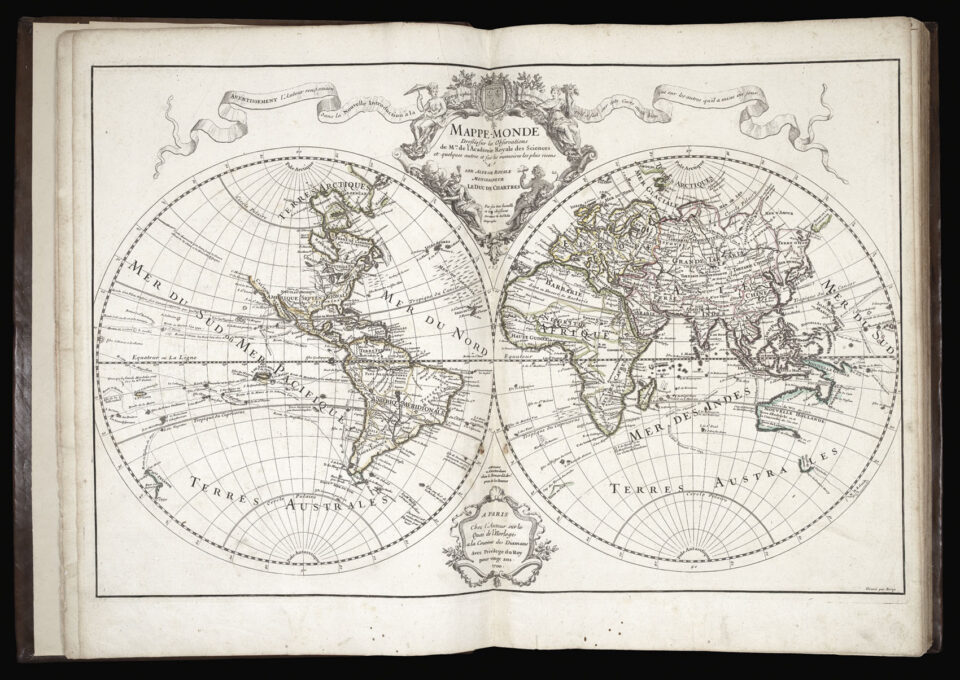 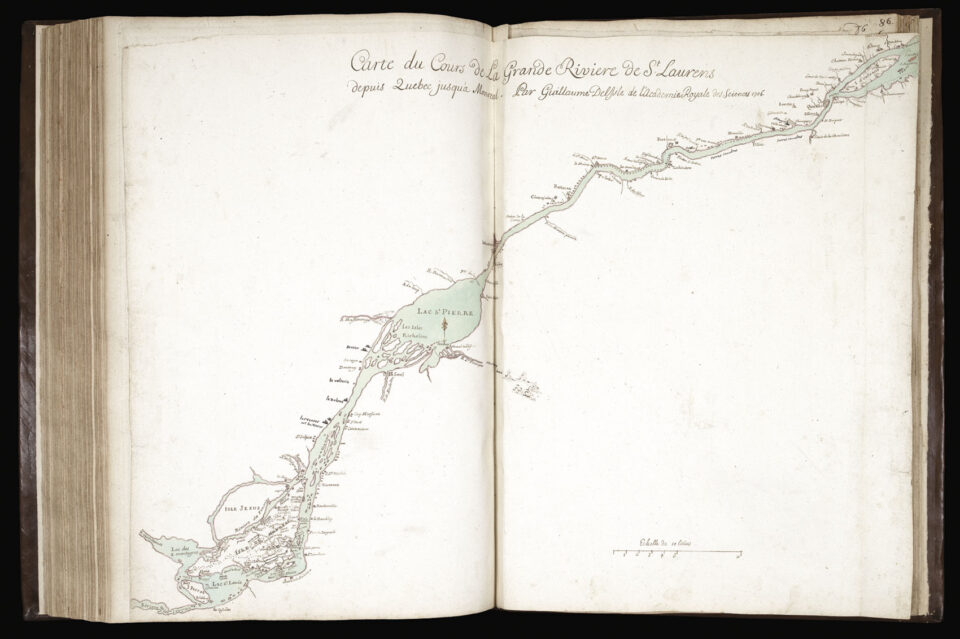 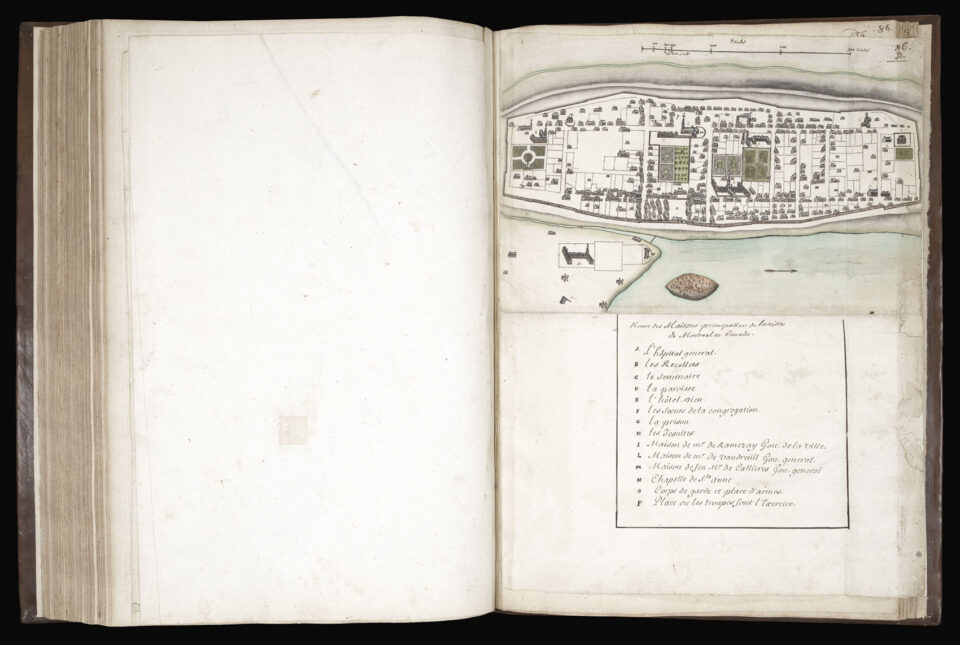 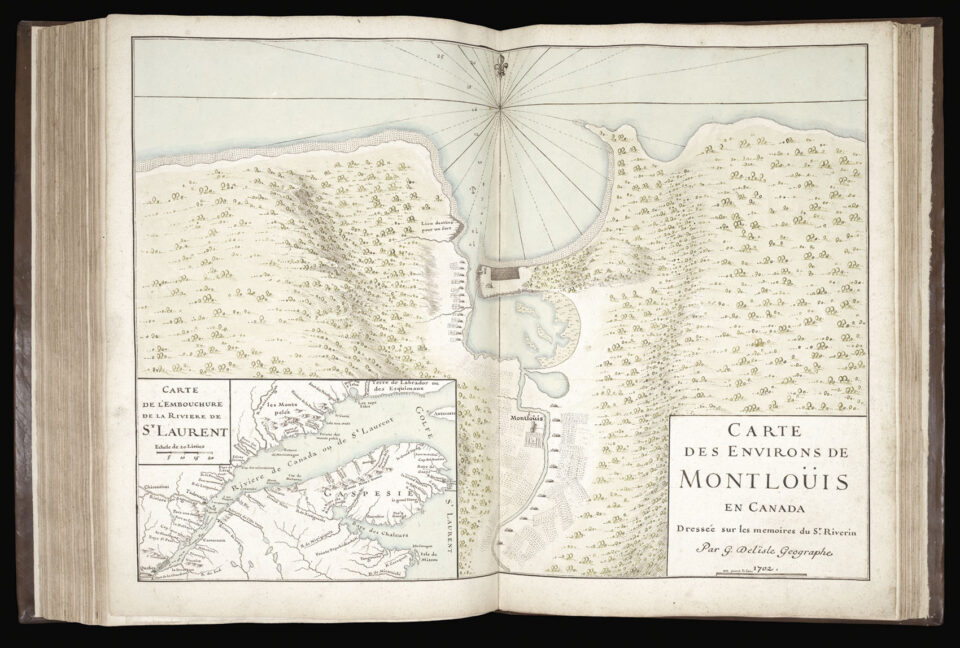 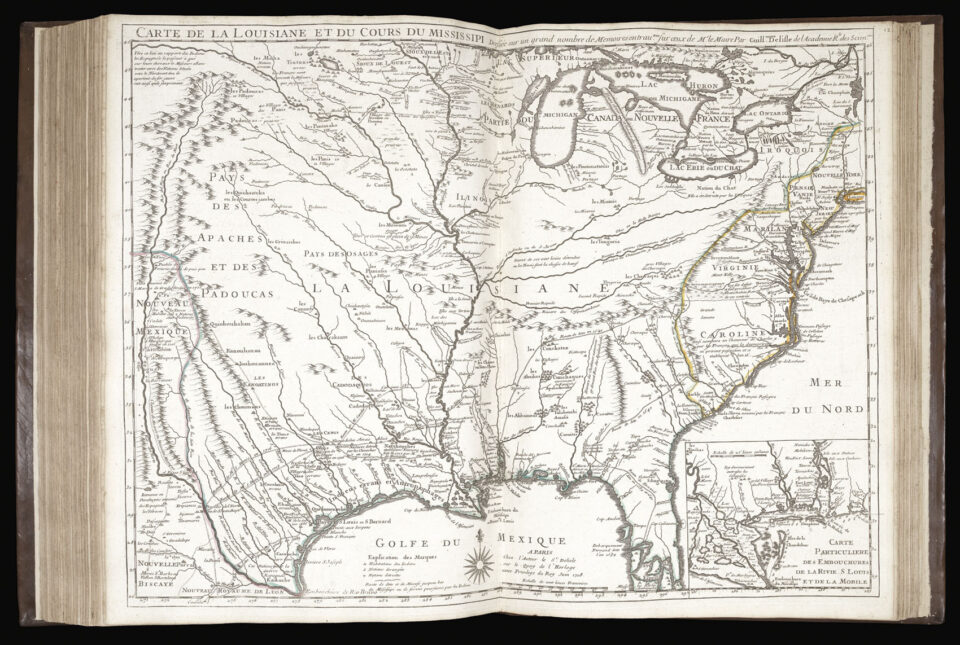