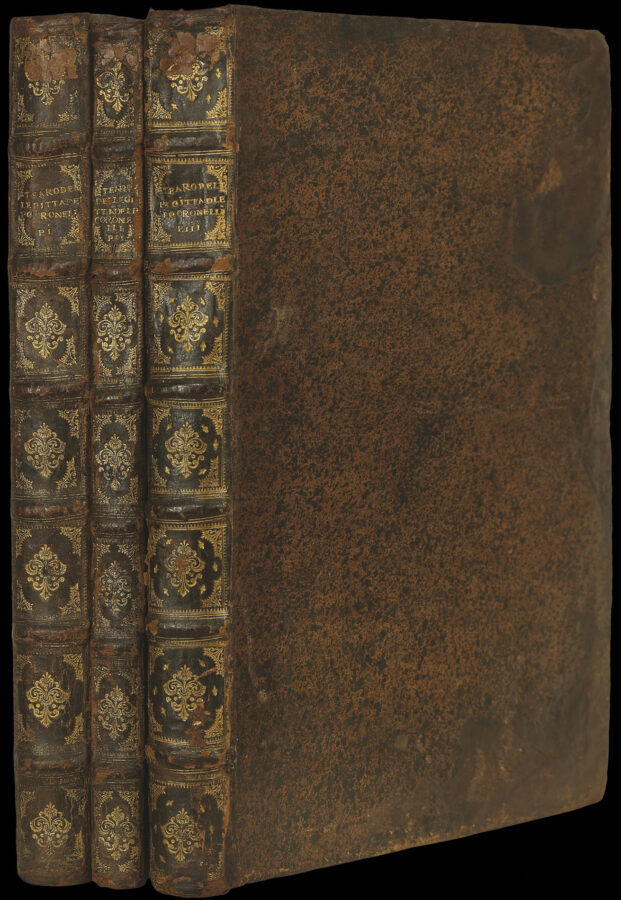 Coronelli’s rare townbook with the elaborate ​“Farnese borders”, offered together with a signed letter and printed ephemera

An exceptionally rare work by ​“one of Italy’s most illustrious cartographers” (Shirley), here in its most desirable state with the separately-printed ​“Farnese” borders, especially commissioned by Coronelli’s patron, Ranuccio II Farnese, Duke of Parma. Together with the book is an autograph letter, signed by Coronelli, and printed ephemera illuminating his business strategy at a time when his globes and atlases were in high demand throughout Europe.

In addition to the fine separately printed engraved borders, noteworthy features of the atlas include the magnificent town plans of Siam (Bangkok) and Constantinople (Istanbul), and fine depictions of Table Mountain and the Cape. The maps of North America show the Mississippi with La Salle’s recent explorations at its mouth in 1681–1687; the extent of French ambitions are reflected in the title ​‘Canada — Nuova Francia’ over most of the eastern half of the continent. The map ​‘La Louisiana’ depicts the Great Lakes with recent discoveries. The northern and western coasts of Australia are engraved according to the voyages of Edels, Nuyts, and Tasman (1618–54).

The manuscript letter expresses Coronelli’s wish to become a member of the ​‘Societe des Globes’ in Paris, and announces the publication of the 3 ½‑foot globes to an unidentified French patron. Both are dated Rome, 6 June 1688. One letter is a draft, written in Coronelli’s hand, in Italian. The other is a translation of the same draft into French, written in a different, neater, hand, and unsigned.

The printed ephemera include a small-format miniaturised sample of the title page to Coronelli’s Atlante Veneto, with information for subscribers printed on the verso; a Manifesto of the ​‘Accademia Cosmographica degli Argonauti’ detailing the contents of Coronelli’s works in progress, as well as payment information; two sample contents leaves for the works ​‘Corso Geografico’ and ​‘Teatro delle Citta’ (the present atlas); and a printed subscriber’s form filled out in Coronelli’s hand for Jean Crozier, a French bookseller in Rome. Viewed together, the documents offer a fascinating picture of early modern marketing techniques, ranging from personal business solicitation to the use of serial publishing, subscription models and even an early form of a book club. The indices to both the ​‘Corso Geografico’, and the ​‘Teatro delle Citta’ also give an indication of collations for two of Coronelli’s greatest works; the ​‘correct’ contents of which is a subject that has confused bibliographers, including the present author, for many years.

Stato Ecclesiastico: Five double-page or folding allegorical engravings, including engraving of the arrival of Cardinal D’Estréés in Rome. IIII, four pages of text and nine engraved maps (of which five double-page)

Regno di Francia: 37 engraved maps (of which one double-page)

Regno d’Inghilterra: Six engraved maps ((of which one double-page)

Germania (covering Germany and the Low Countries): 27 engraved maps (of which one double-page)

Regno di Candia: 20 engraved maps (of which one double-page), and one text leaf key to large plan of ​“Citta di Candia“

Constantinopli: Five engraved maps (of which one double-page).

Africa, Asia, et America: 21 engraved maps (of which one double-page). 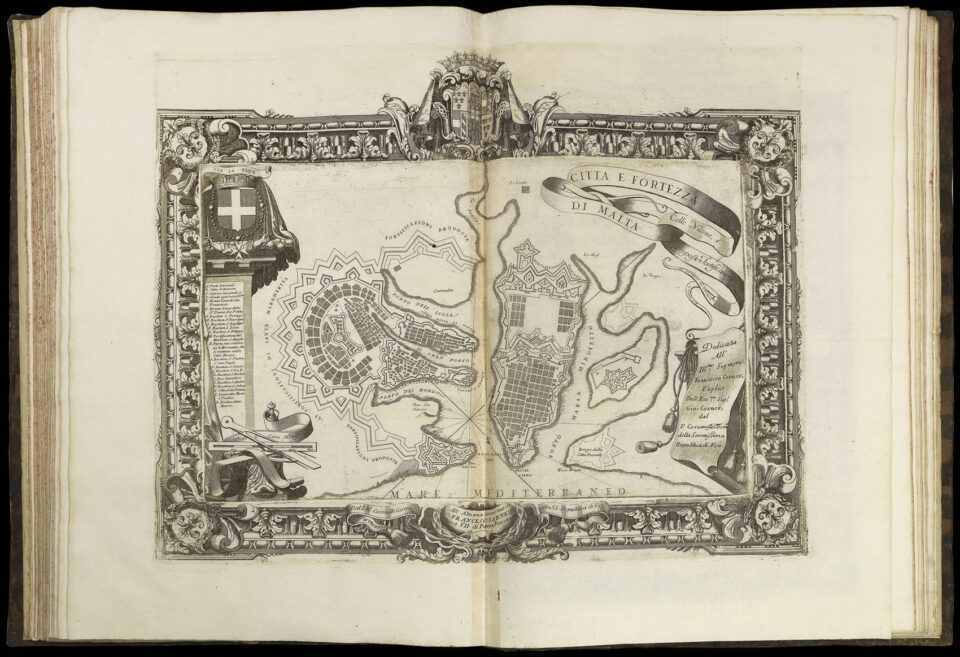 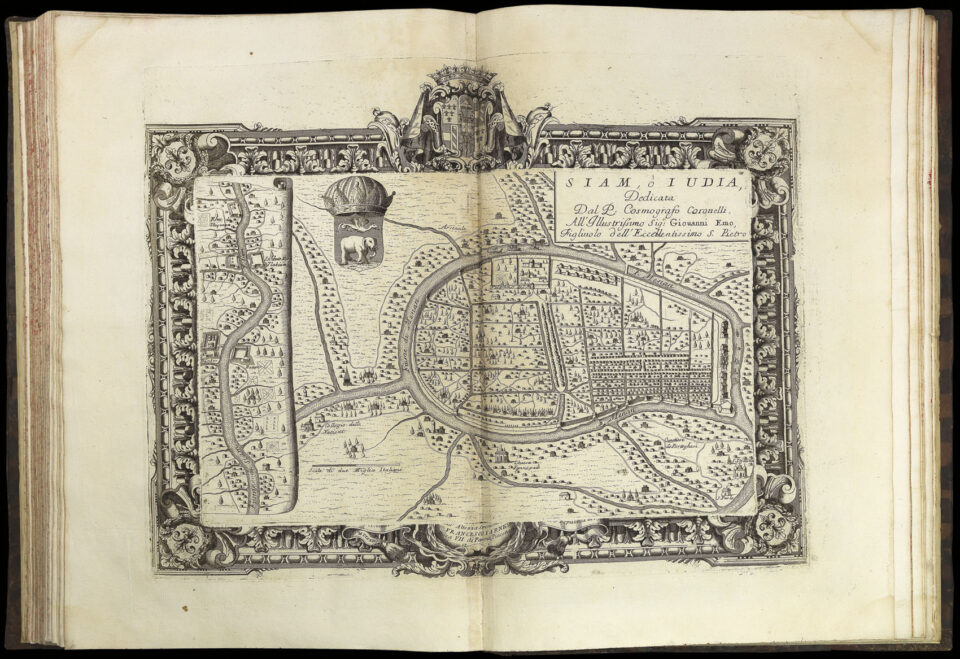 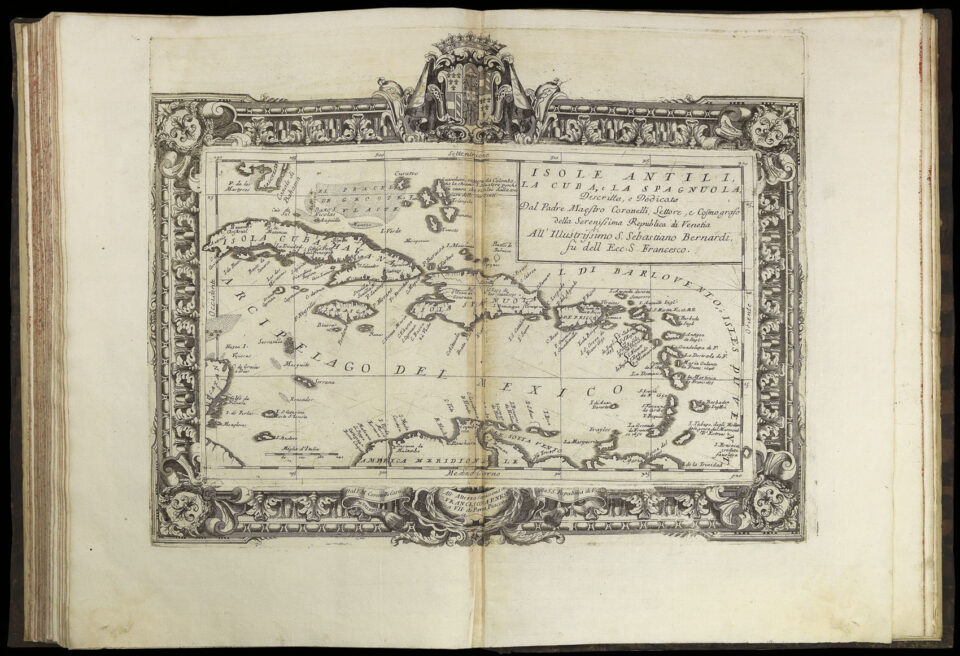 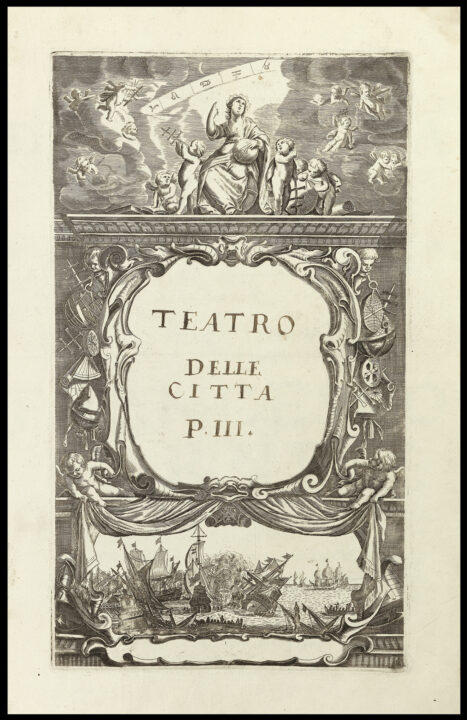