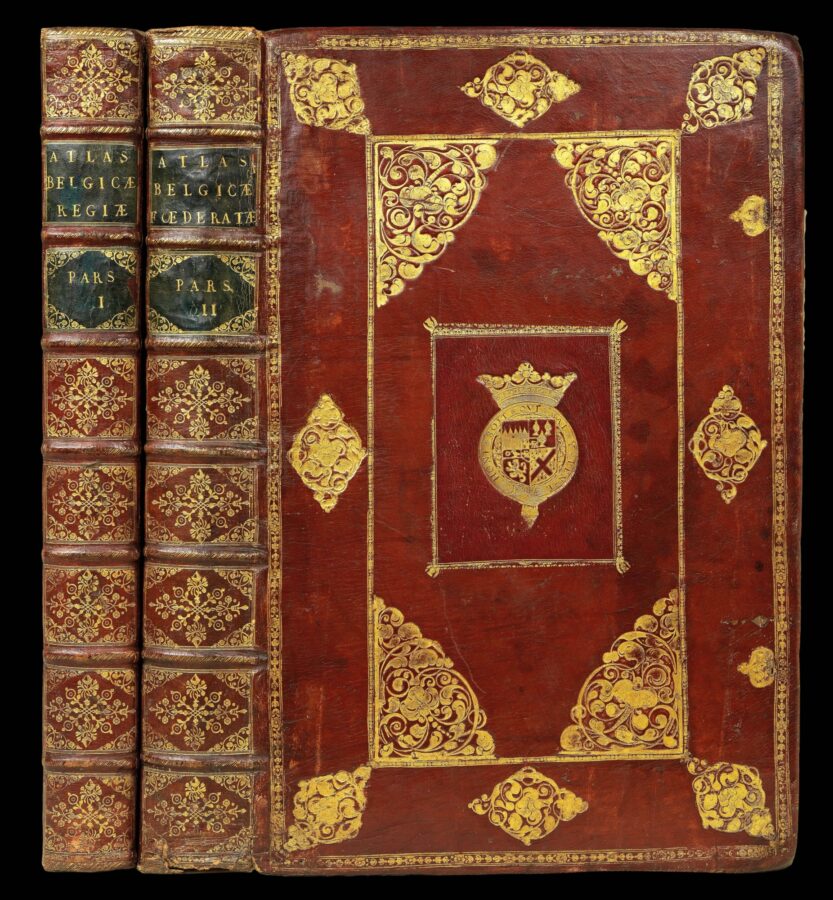 An exceptionally fine example of Blaeu’s great work on the towns of the Netherlands bound in full red morocco with the coats-of-arms of James Butler, 1st Duke of Ormond

Third Latin text edition, and an exceptionally fine wide-margined example with fine contemporary colouring of Blaeu’s great work on the towns of the Netherlands.

​“Of all the Blaeu atlases, the townbooks of the Netherlands are held in the highest esteem in the Netherlands. This is partly due to the fact that their composition is linked up with the struggle for independence from Spain of the Dutch Republic in the 17th-Century. Bound up, by sentiment, with the most dramatic and heroic period of the shaping of the Dutch State it shows the proud and industrious cities of the North in their full splendour. Before the end of the battle with Spain, Joan Blaeu planned his town books which were to contain ca. 220 maps, evenly distributed over two volumes: the towns of the Republic in Volume I, the towns belonging to Spain in Volume II. In the planning stage of the atlas, some years before 1648, while the text had been printed and also most of the plates, Joan Blaeu could not know how the Peace treaty would turn out. In the last decades of the war, several towns and fortresses in the south had been or were besieged by the army of the Republic and Blaeu had to take a decision as to inclusion of these disputed towns into the two volumes of his atlas. The very first [Latin text] edition of his town atlas reflects the situation during the last years of the war: 26 maps of towns and fortresses are incorporated in the ​“Spanish” volume, but had to be transferred to the ​“Spanish” side. Consequently, apart from the very rare first edition, the volumes I and II are uneven in the number of maps, the first volume being the larger. At the end of the Index of the first edition, printed in 1649 after the Treaty of Westphalia, Joan Blaeu [gives a] notice to the reader” explaining the arrangement of the maps
(Koeman I, p.295).

The Blaeu family firm was founded by Willem Janzoon Blaeu (1571–1638) in 1596. He was eventually joined by his sons, Cornelius (1616–1648) and Joan (1596–1673). The firm became the most productive cartographic establishment in the Netherlands until it was destroyed by fire in 1672. The elder Blaeu initiated the great series of atlases that culminated in the ​‘Atlas Maior’, in which Joannes Blaeu incorporated much of the geographical knowledge bequeathed him by his father.

The town books were once a part of a 9 volume set, bound with the Janssonius sea atlas, and a 6 volume 1649–1655 Blaeu ​‘Theatrum orbis terrarium site Atlas Novus’.

The works were bound for James Butler, 1st Duke and 12th Earl of Ormonde (1610–88), soldier and statesman, commander of the Royalist forces against Cromwell (his coat-of-arms on the bindings). It was subsequently in the library of the Earls of Portarlington Emo Park, County Queens, Ireland (19th-century bookplate with the Dawson-Damer arms). The set had an autograph note (loosely inserted) dated 8 Sept. 1863 by Alexandrina Octavia Maria Vane, Countess of Portarlington, betting Lionel William Dawson Damer that neither Thomas Brudenell, 7th Earl of Cardigan, nor his wife Adeline Louisa, will ever set foot in Emo House. The Janssonius sea atlas was sold c1974 to David Gestetner and appeared in Daniel Crouch Rare Books’ Catalogue One in 2010. The remaining 8 volumes were sold at Christie’s London, 8 May 1974, lot 42 (the town-book then still present) to; Dawson’s, Hammond and Traylen, who sold it on to a Belgian collector. This collector consigned the Atlas Novus to Sotheby’s London, 2 February 1985, lot 78, retaining the town books until recently. 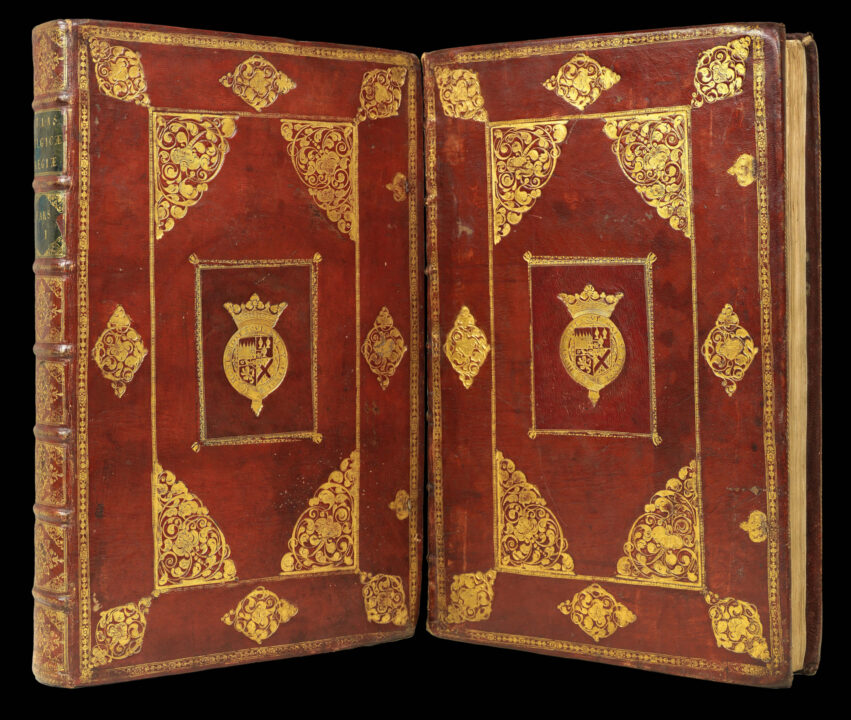 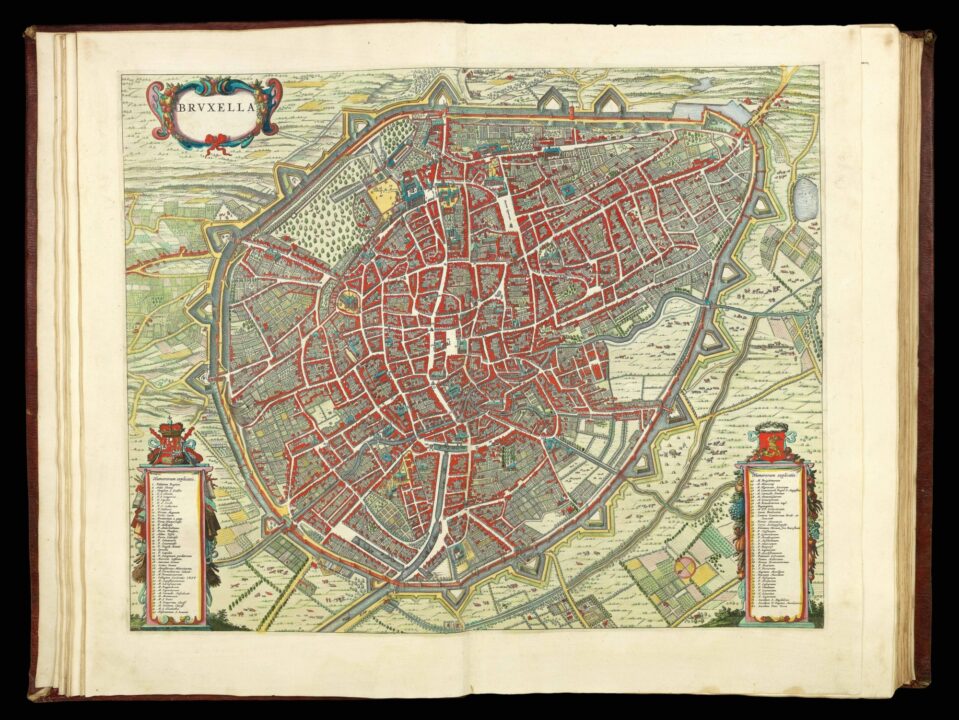 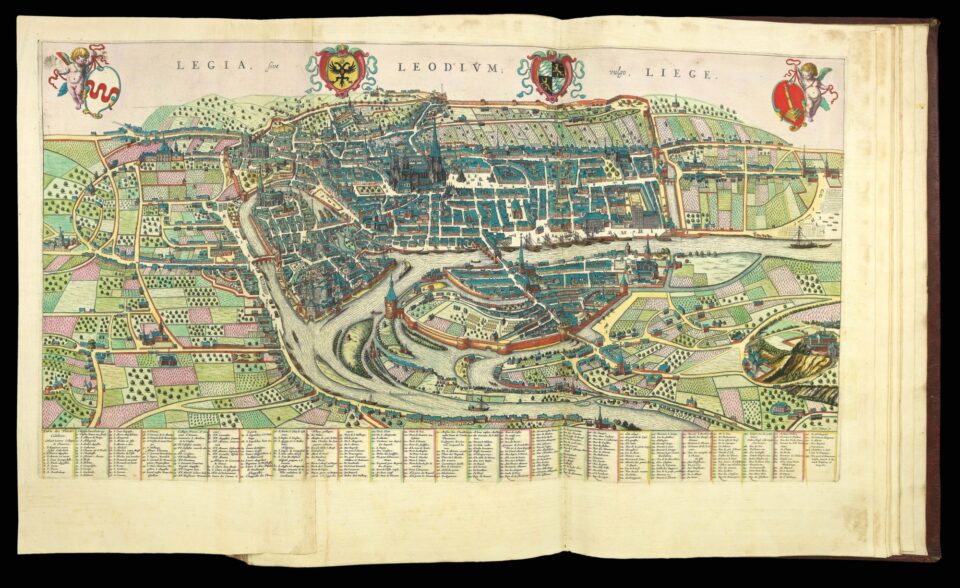 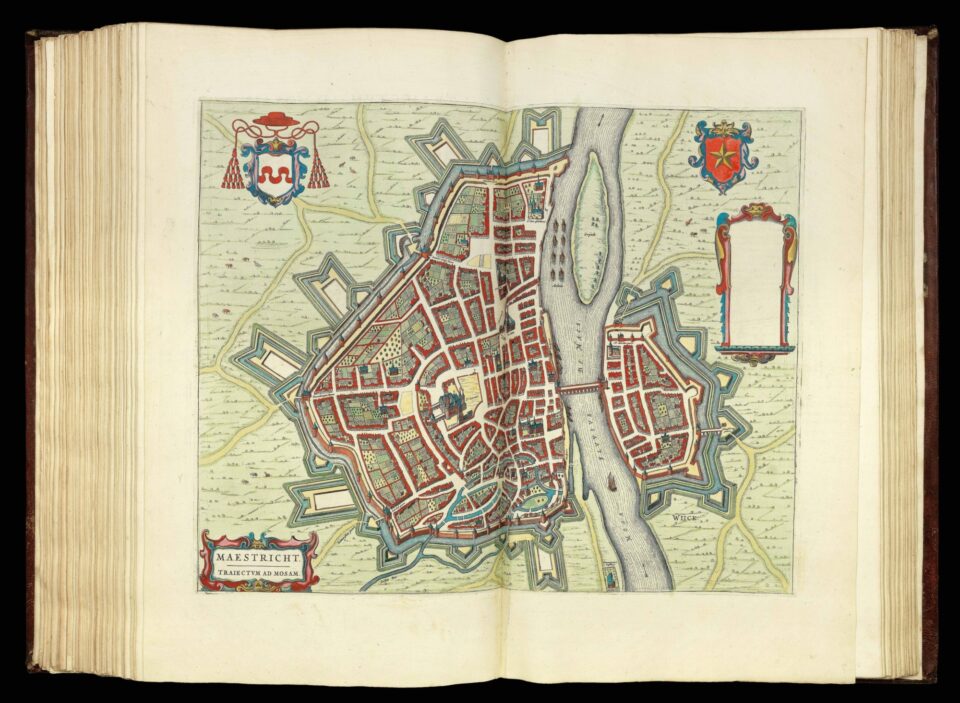 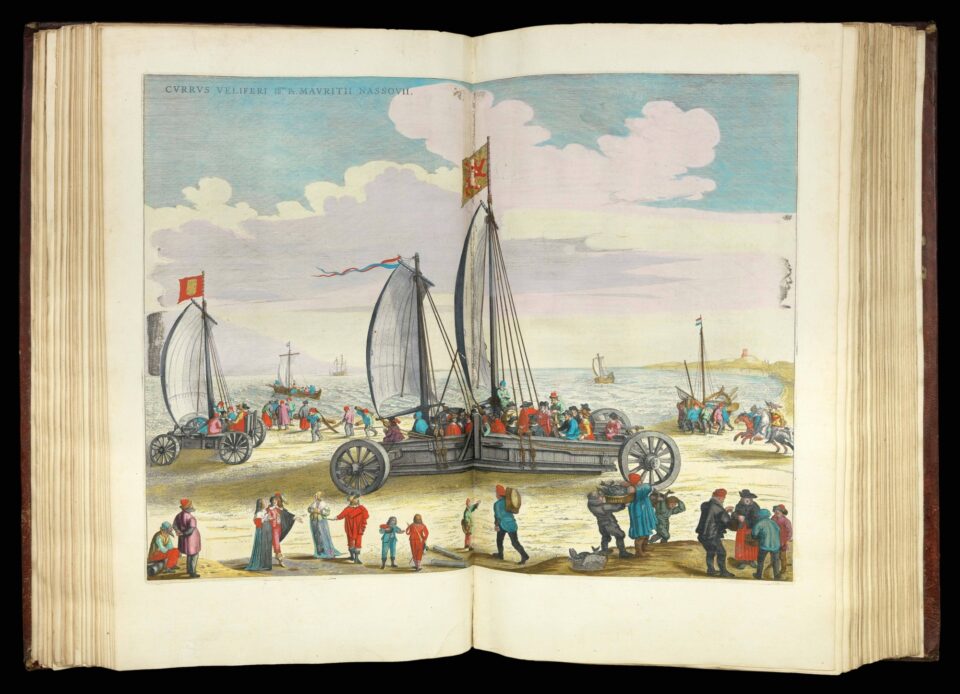 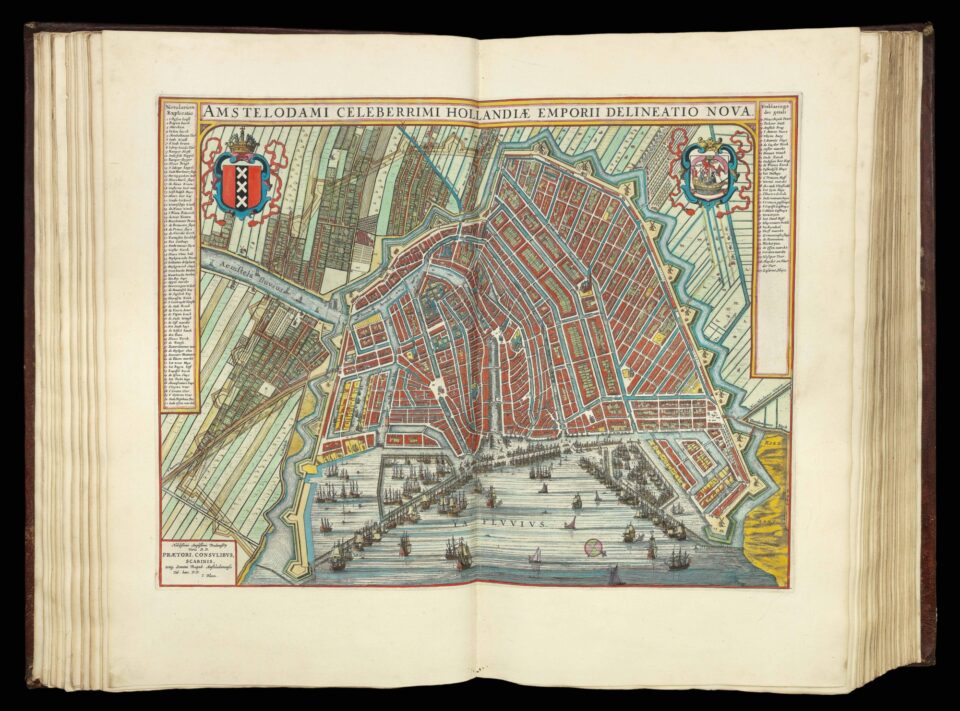 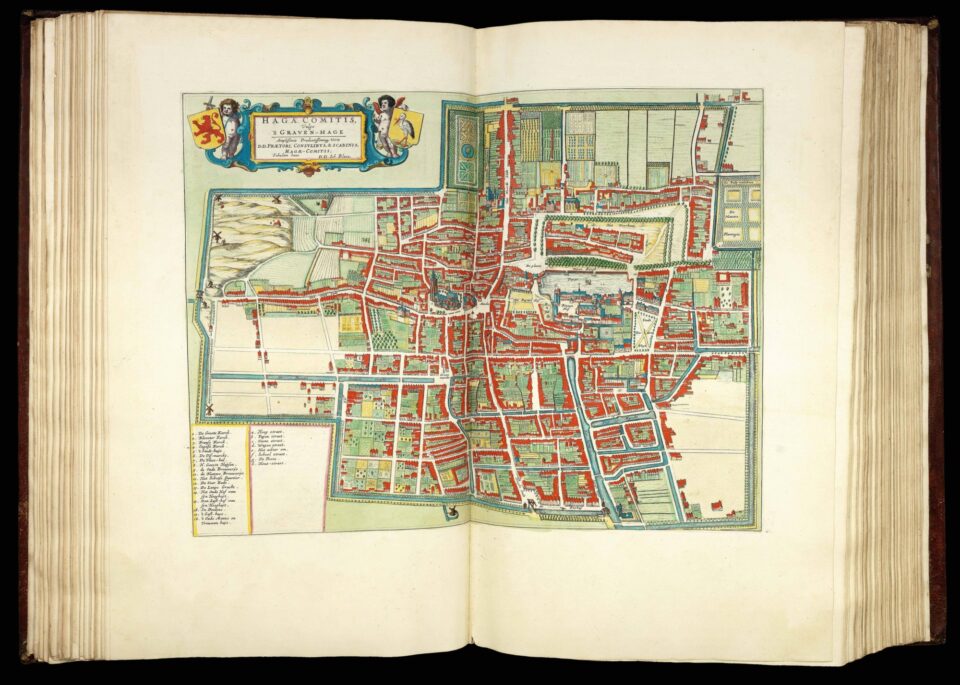