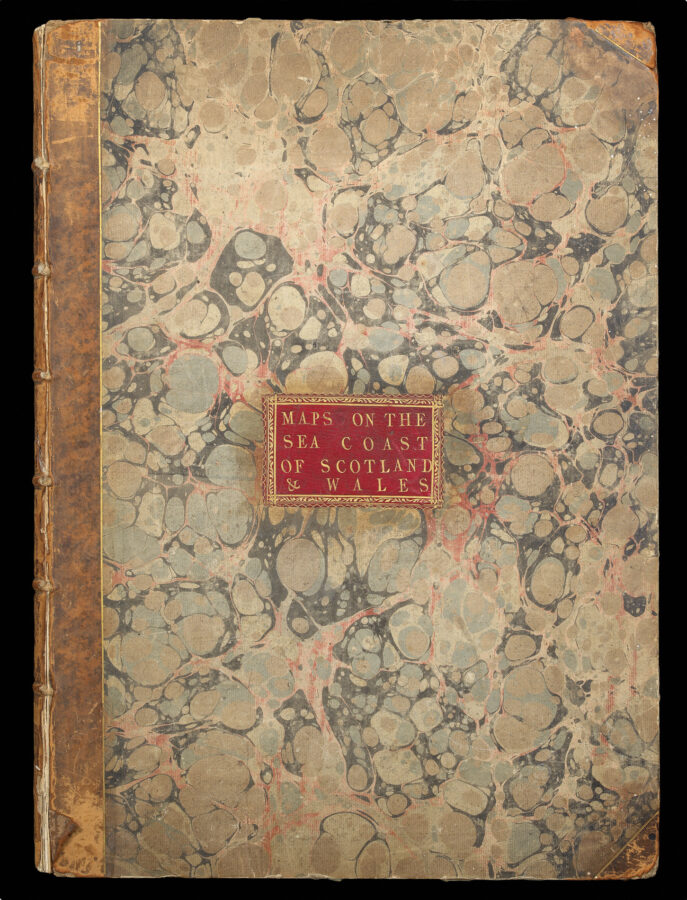 A fine mid-eighteenth century composite atlas bringing together three important works of British cartography, representing some of the finest regional mapmakers of the period, with an interesting provenance. The bookplate is from the library of Dr James Musgrave, who bought the library of Sir Isaac Newton from Charles Huggins. Huggins’ father John purchased the library after Newton died in 1727 without making a will.

1. ADAIR, John. The Description of the Sea-Coast and Islands of Scotland Part I. Edinburgh, George Mosman, 1703.

John Adair (c.1655‑c.1722) set a new standard in Scottish cartography with his ​‘Description’, the second part of which was never published. He had already made his name with a survey of the shires of Scotland commissioned by the Privy Council in 1683, where he also surveyed the Firth of Forth for the map of the area which appears in this volume. This resulted in his election to the Royal Academy in 1688. The importance of the project which generated the ​‘Description’ is shown by the act passed by the Scottish Parliament in 1686 giving Adair the project of ​“surveying the Kingdom of Scotland, and navigating the coasts and isles thereof”, which recognises “[t]he want of such exact maps, having occasioned great losses in times past”. Updating extant maps of Scotland would, it was hoped, encourage foreigners ​“to trade with more security on our coasts”. Adair continued his surveys over the next two decades, funded by two acts of tonnage imposed by Parliament on foreign and Scottish ships. The products of his labours, the ​‘Description’, was eventually published in 1703.

Adair was a meticulous workman who conducted thorough fieldwork, and was possibly the first Scottish cartographer to use triangulation extensively. His detailed and finely drawn maps reflect his skill. Other mapmakers continued to draw on his work until the middle of the eighteenth century. Unfortunately, his methods, coupled with financial difficulties, meant that very few of his maps were engraved during his lifetime. If published, the second part of the ​‘Description’ would have contained seven charts and two sheets of views of the west coast of Ross, Skye and the Western Isles from Lewis to Ulst.

2. MACKENZIE, Murdoch. Orcades: Or A Geographic and Hydrographic Survey of the Orkney and Lewis Islands. London, 1750.

Murdoch Mackenzie (1712–1797) was born and raised in Kirkwall on the Isle of Orkney and although little is known about his formal education, it is likely that he attended Edinburgh University where his aptitude for mathematics brought him to the notice of Professor Colin Maclaurin. It was Maclaurin who, when the question of a hydrographic survey of the Orkneys arose in 1742, gave Mackenzie a testimonial that spoke highly of his qualifications as a surveyor.

In 1743, Mackenzie advertised for subscribers for his survey, in order that: ​“a passage round the north coast of Britain which has hitherto been so dangerous and fatal to shipping may hereby be rendered both safe and convenient”. He further stated that ​“subscriptions will be taken in by the booksellers in Edinburgh; at whose shops, and at the coffee houses, a specimen and the proposals may be seen”. In December of 1743 he journeyed to London with letters of introduction from the Earl of Morton, the owner of the Orkneys. His proposed survey was met with considerable interest, and not only did he acquire 50 new subscribers, but the East India Company advanced him fifty pounds, and the Admiralty gave him a theodolite, a plane-table, and a chain. The surveying began in 1744. By 1749 he was able to submit a paper to the Royal Academy on ​‘The state of the Tides in Orkney’, and in May 1750 the atlas was published. Mackenzie’s gratitude to his subscribers is evident in his dedication of the general chart of the Orkneys to Morton, the chart of Pomona to the East India Company, and the chart of the Northeast Coast of Orkney to the Admiralty.

The surveying is noteworthy for being the first sea charts of British waters based on triangulation. The principle of triangulation, although well-established in other disciplines, had only just been adopted for topographic mapping and charting. This methodical approach can also be seen on the charts themselves which, together with soundings, contain information on the tide and tidal streams. Bottom deposits are shown by a letter under the sounding – a convention still in use today.

Lewis Morris (1701–65) was an intriguing figure; a self-taught surveyor whose day job was working as a customs officer, and also a noted poet who co-founded the Society of Cymmrodorion, which promotes Welsh culture. In fact, the maps in this work are preceded by a note from Morris explaining the pronunciation of the faithfully rendered Welsh place names, so that the reader might better understand ​“a language esteemed one of the most beautiful in the world”. In an autobiographical note in the text, Morris says that in 1737 he was appointed by the Admiralty to make an ​“actual survey” of the Welsh coast, but the survey was delayed, first by lack of resources and then, in 1744, by war with the French, so that publication was not completed until 1748. Morris’s work comprised a large general chart, apparently not complete when the main work was published, and twenty-four smaller charts of harbours or sections of coast.

Lewis hoped his work would draw attention to the potential for English investment in Wales, and encourage investigation into the country’s natural resources and agriculture. He complains in the introduction that ​“We chose to rummage the East and West Indies for money, rather than go fifty or a hundred yards underground in our island, where with proper management we may find the very thing we so much strive for.“

The work is rare, due to its intended function as a coastal guide. Among the subscribers there are a number of booksellers; significant figures in cartography include the marine surveyor John Eyes, George Grierson, a sea-atlas publisher in Dublin, the engraver and globe-maker Nathaniel Hill, James Mynde, engraver of Flamsteed’s Celestial Atlas, John Rocque, a notable Huguenot mapmaker and the publisher of the first large-scale survey of London, the engraver William Henry Toms, and the geographer to King George III, Thomas Jefferys Sr. 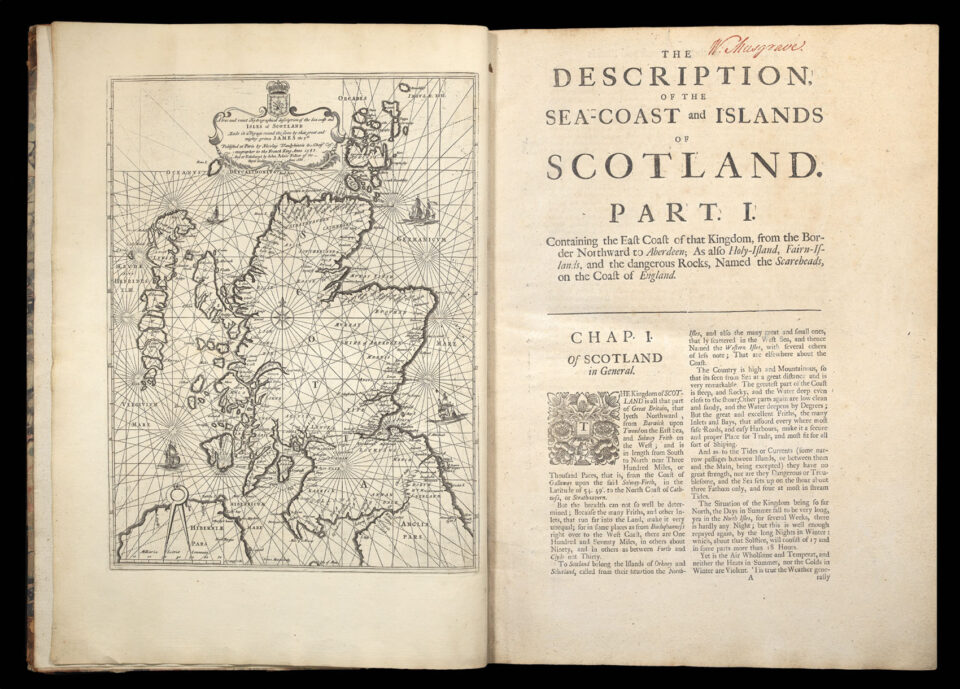 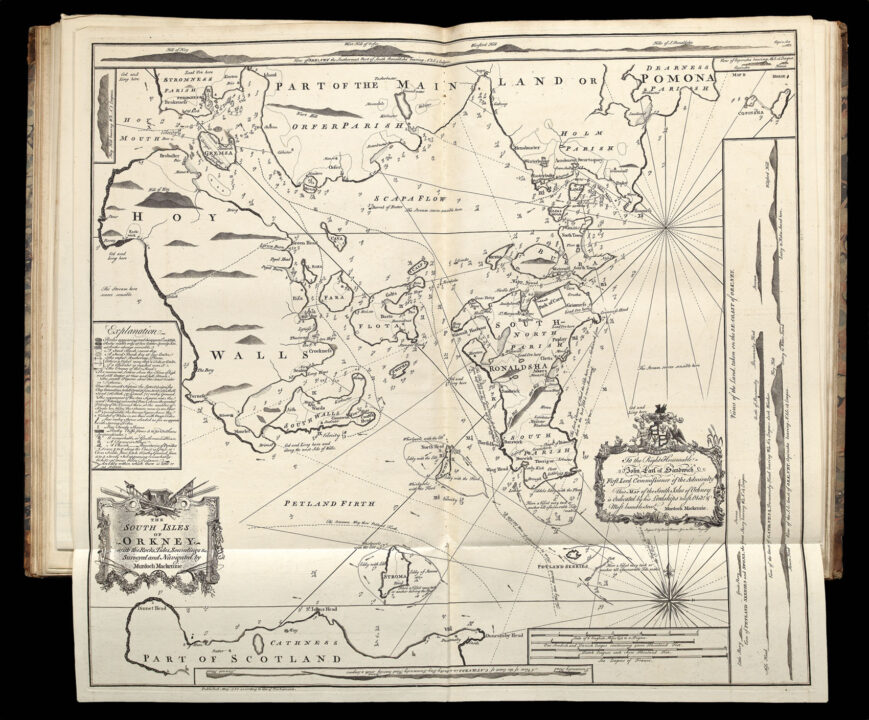 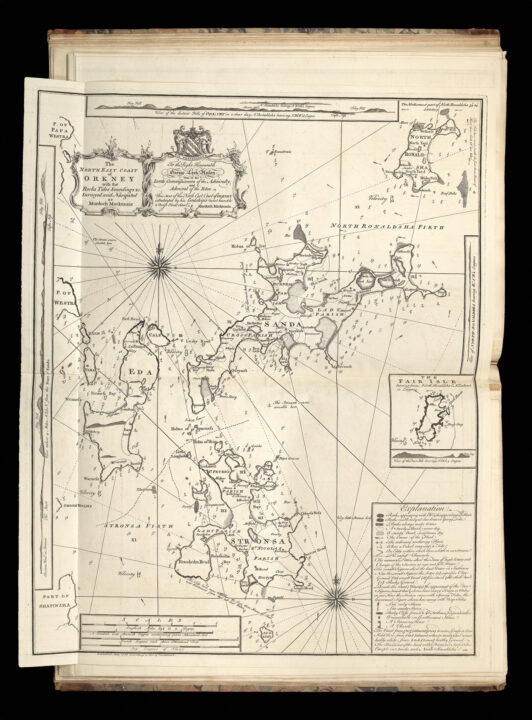 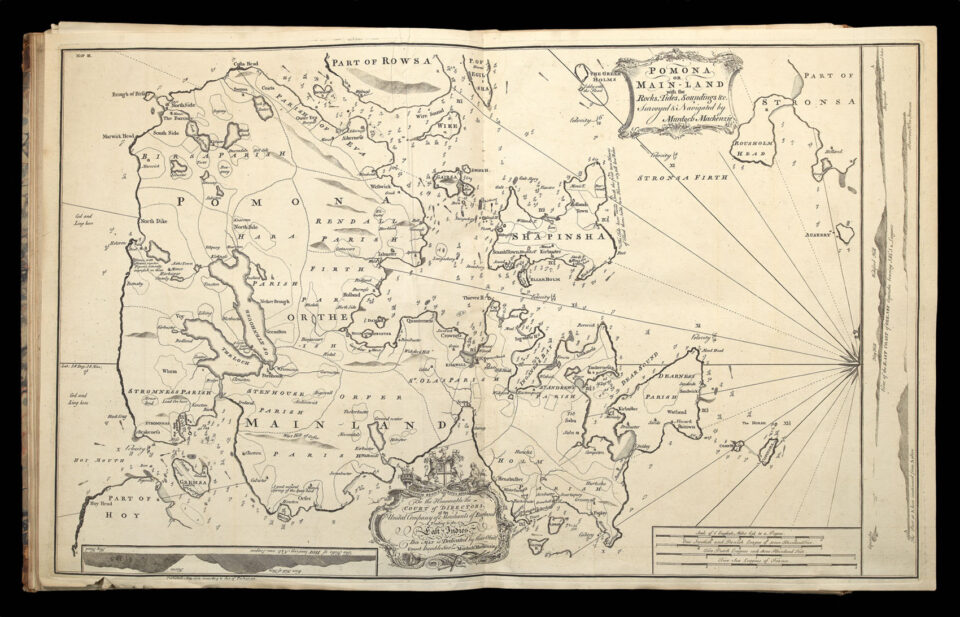 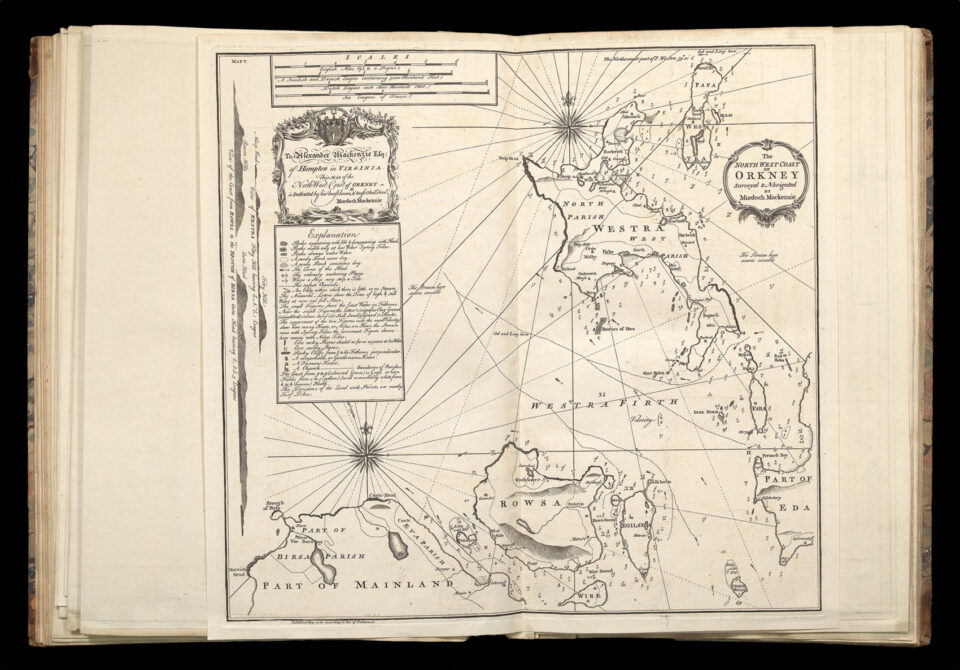 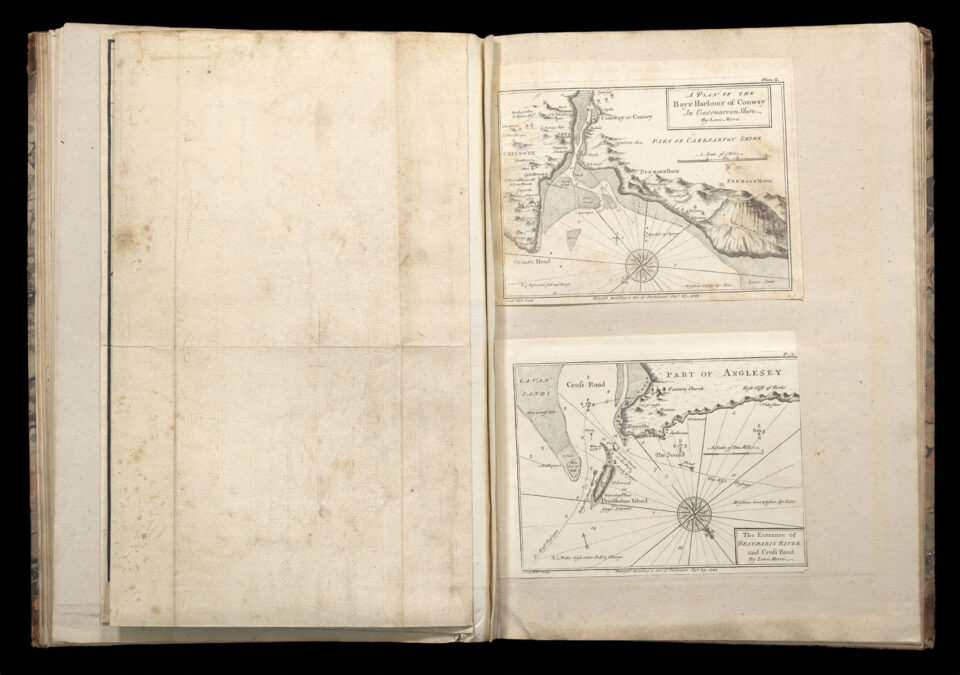 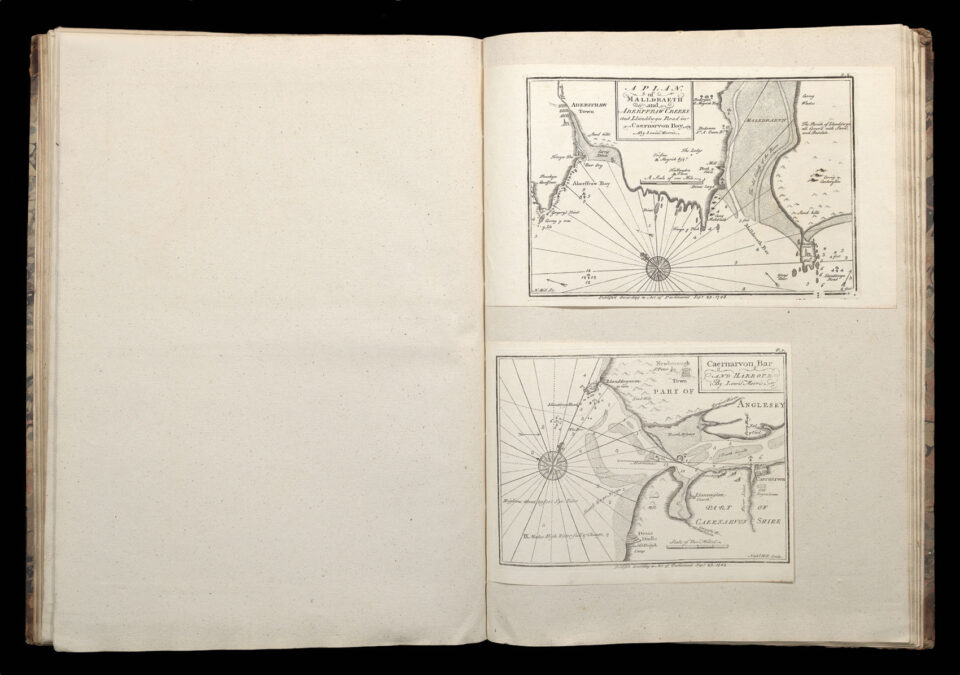 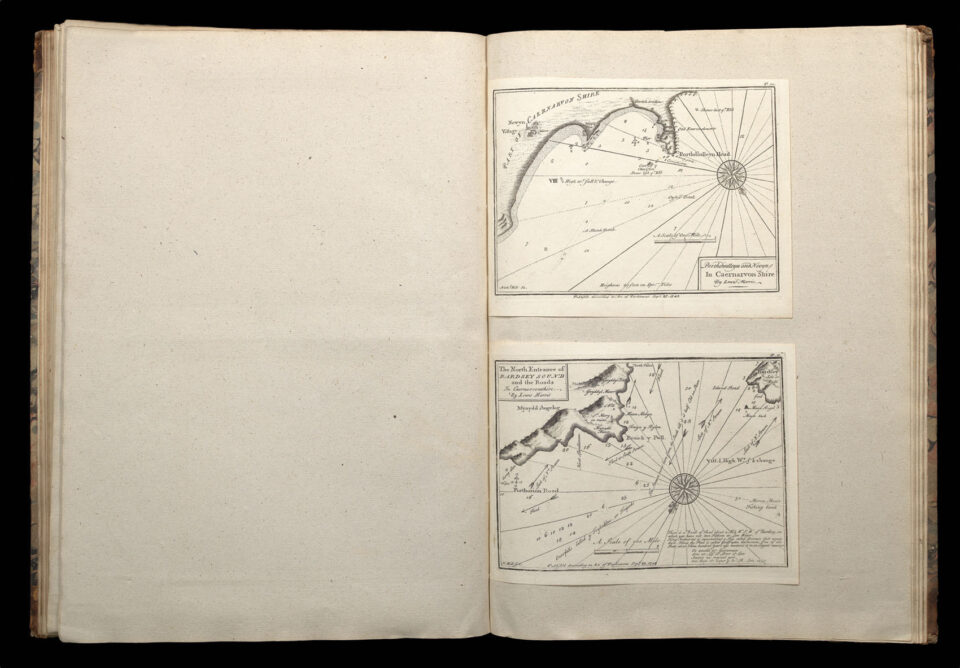