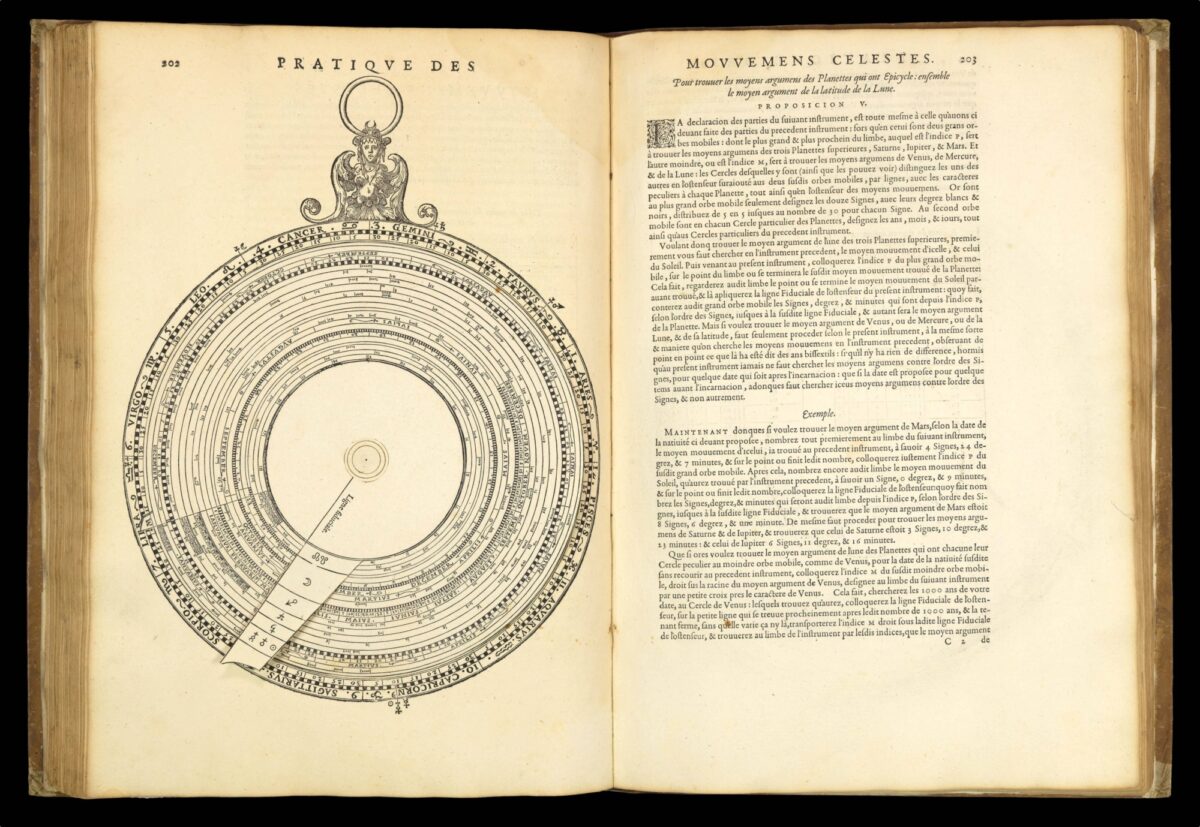 The ​‘Astronomique discourse’ was based on Petrus Apianus’ 1540 work ​‘Astronomicum Caesareum’. Like that famous work, it includes among its 175 woodcuts many beautiful and intricate volvelles. There are a total of 14 volvelles, 13 of which are full-page, and this copy contains all 36 moving parts. The discs of these paper instruments perform many functions conventionally associated with the astrolabe, such as simulating the movement of planets, reckoning time, and assisting with the practical matters of surveying and astrology. ​“A Scottish astronomer of considerable reputation,” Bassantin cut no corners in the production of his work: ​“The size of this volume and the extent of its illustration and ornamentation make this an unusually fine example of the attention given to the printing of scientific works at this period” (Mortimer).

The text is arranged in several ​‘treatises’ of increasing complexity, beginning with information about understanding sine tables and trigonometry, moving to the application of these principles to the terrestrial and celestial spheres and to the interaction of planets, and closing with a lengthy section concerning practical problems of the heavens. The final section contains the majority of the volvelles. While Bassantin gives the reader much information in textual and tabular formats, his illustrations provide the bulk of the didactic force and do so without sacrificing beauty: particularly in the armillary sphere supported on the back of Atlas, the handsome volvelle of the constellations of the northern hemisphere, the glowering moon-faces in discussions of eclipses, and the fine metalwork form of the paper instruments.

James Bassantin (c1500-1568) studied at the University of Glasgow and seems to have taken pride in his Scottish heritage even as his work took him to the continent. He identifies himself as ​“Escossois” on this work’s title-page and lists eight Scottish towns in his tables of longitude and latitude. Bassantin eventually settled in France as a teacher of mathematics, first at Lyon and then in Paris. He spent time in the French court, and dedicated his ​‘Astronomique discourse’ to Catherine de’ Medici, Queen of France. His revised edition of Jacques Foucard’s ​‘Paraphrase de l’astrolabe’ (1555) shows him to have been familiar with the most recent advances in German and Italian mathematics and astronomy. Bassantin returned to Scotland in 1562 and, en route, predicted that there would be ​“captivity and utter wreck” for Mary, Queen of Scots, recently widowed and returned from France, and that the crowns of England and Scotland would eventually combine, bringing an end to the House of Tudor (Melville). Bassantin’s astrological acumen seems to have appealed to the superstitious James VI of Scotland (to become James I of England and Ireland) who kept in his library a copy of the ​‘Astronomique discourse’ inherited from the collection of Mary (Warner, Library).

The correct collation of the volvelle parts to this 1557 first edition has long been a matter of debate among bibliographers, with Mortimer calling for 36, although most otherwise well-preserved copies retain between 33 and 35 parts. The present volume is one of only a very few known to contain all 36 parts. 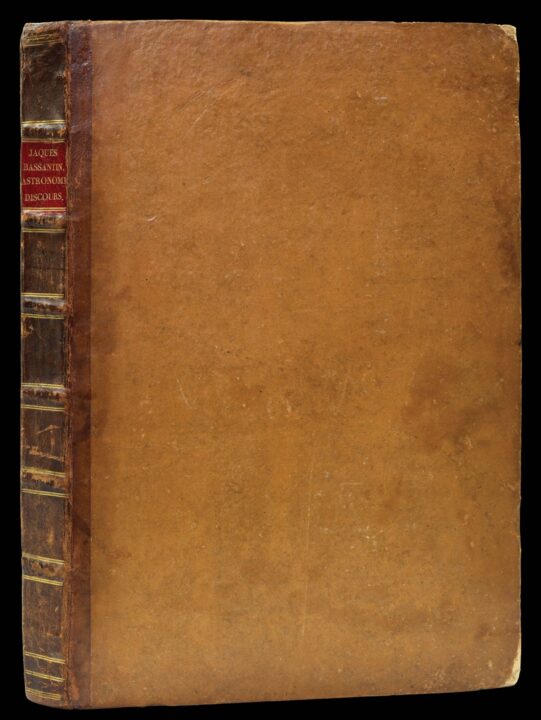 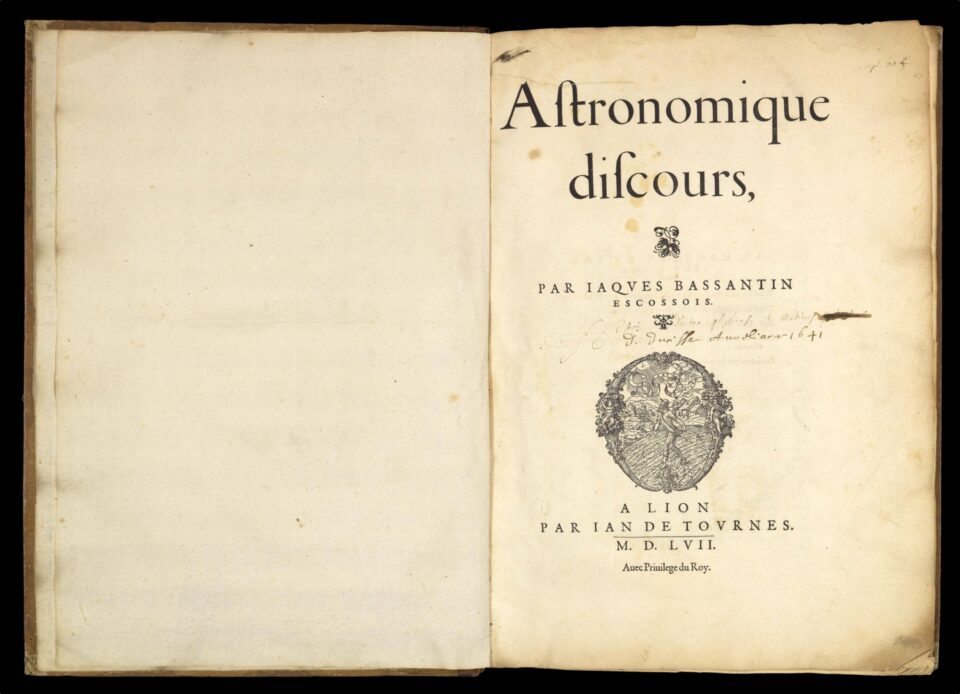 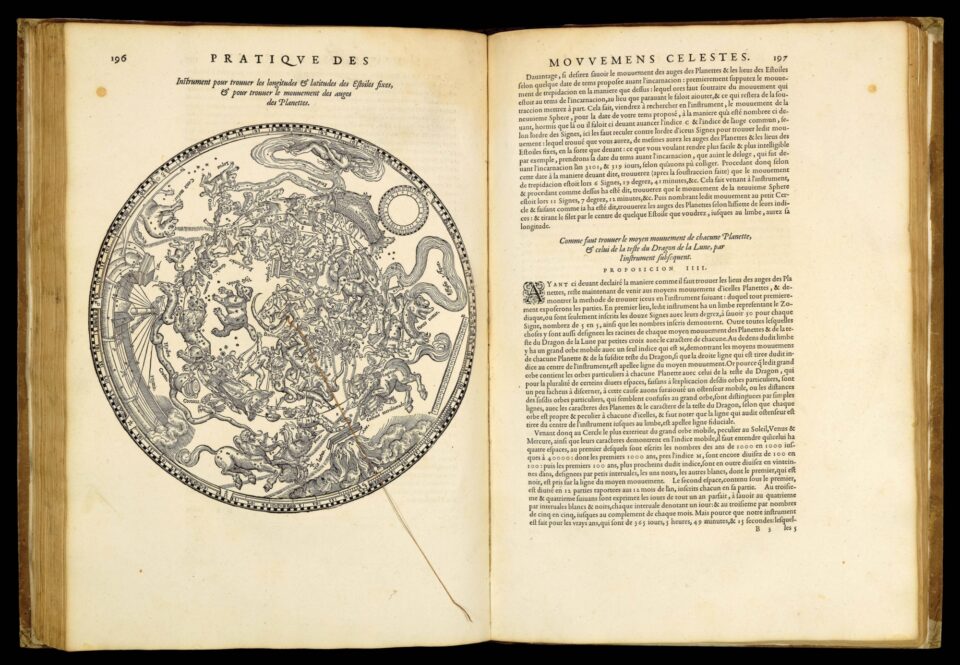 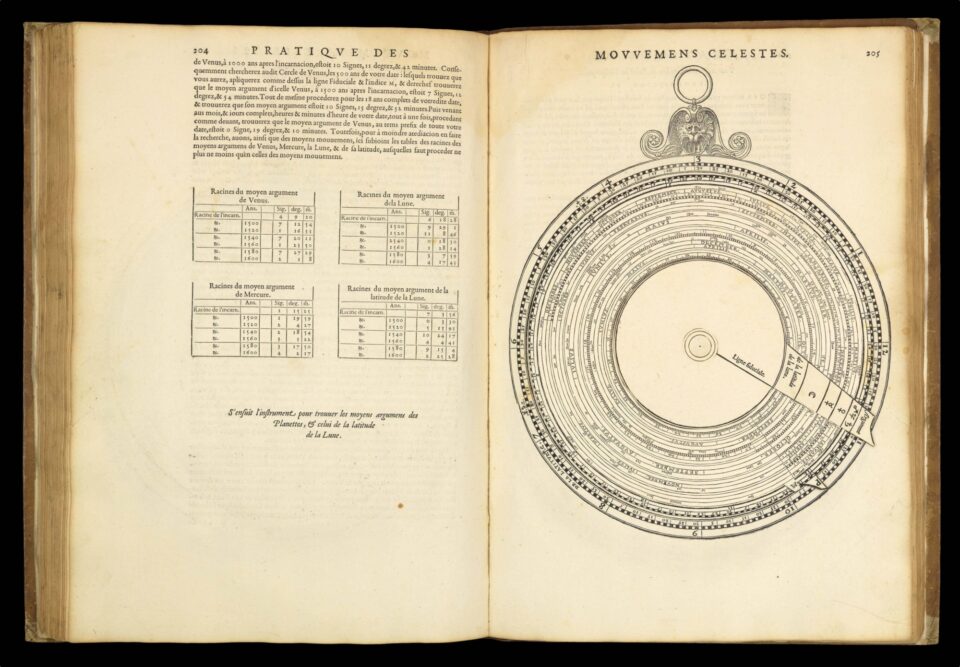 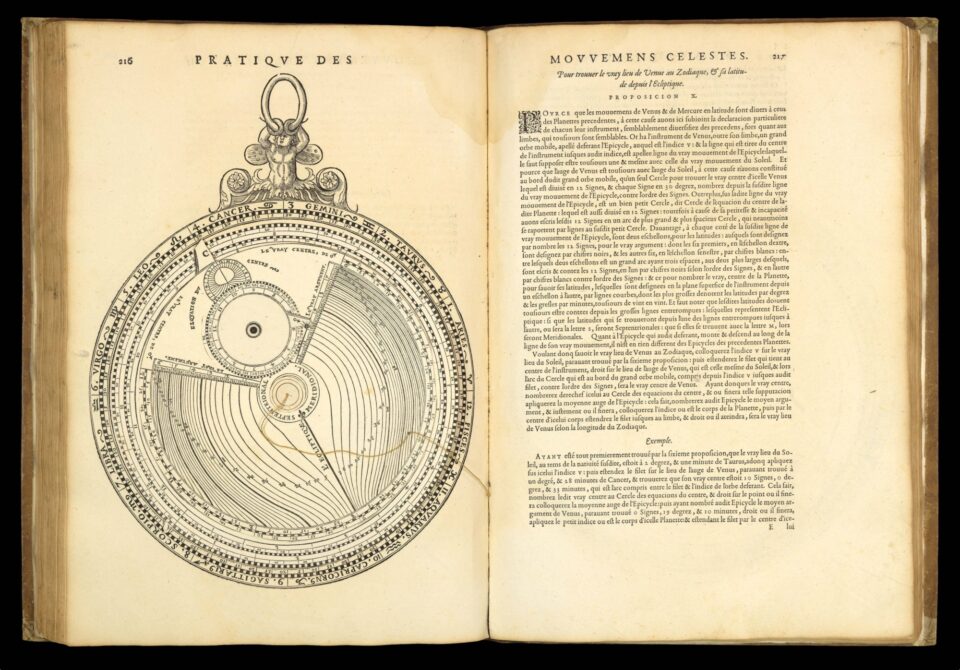