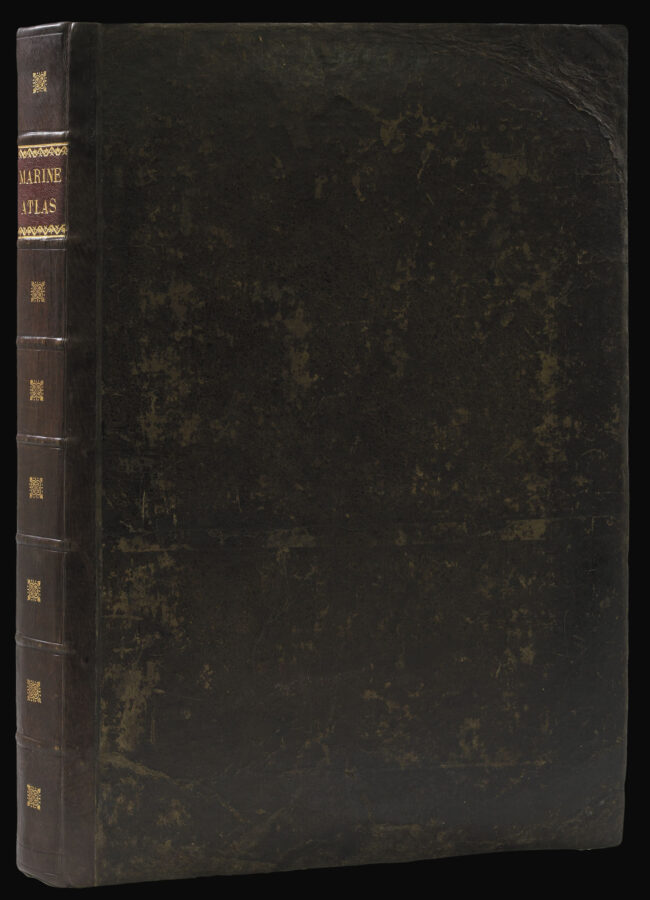 The Marine Atlas or Seaman’s Complete Pilot For All The Principal Places in the Known World.

William Heather (1764–1812) started business in 1793, as a publisher and dealer in charts and nautical instruments. He had learnt is trade from the chart publisher and teacher of navigation John Hamilton Moore, with whom he resided for five years. Heather’s premises were based on the same street as the East India Company, at 157 Leadenhall Street, under the sign of the ​‘Little Midshipman’, later known as the ​‘Navigation Warehouse’. In 1796, he joined in partnership with his neighbour, book and printseller, Thomas Williams, with the business being known as ​‘Heather and Williams’, or Heather & Co.; the partnership would last until 1800. During this time John Norie – another pupil of John Hamilton Moore – joined the firm, as a draftsman of charts and teacher of navigation. Norie would later take over the business following Heather’s death in 1812, and turn it into the leading independent chart publisher’s of the nineteenth century. The business would later be immortalised by Charles Dickens, in Dombey & Sons.

Shortly after 1802 Heather and Williams published ​‘The Marine Atlas or Seaman’s Complete Pilot for all the principal places in the known world’. Internal evidence of this and other examples leads us to believe this was first issued in 1803. The charts required to cover the whole world that he issued do not appear to bear earlier dates than 1803. Those which appear in his atlases dated to 1804 appear to be supplementary and not necessary for a complete work. Indeed, this example appears to be if not quite the earliest feasible issue but one of the earliest we have been able to identify. The title page is the earlier of the two we have been able to find with the imprint of Heather and Williams covered with a paste over of William Heather only. The Contents leaf is in the earlier format with 50 items listed although in this example two asterisks are added following items numbered 10 and 38. These represent supplemental charts. The first being another chart of St. George’s Channel in three sheets dated 1804 and the double page chart of the Straits of Sunda and the entrance to Batavia of interest following the bankruptcy of the VOC. The former is the only chart dated 1804 on the atlas, the remaining are 1803 or earlier. As their partnership ceased in 1804 and the latest dated map is 1804, it would seem reasonable to place this date on the atlas.

The charts all bear florid engraved titles, two of which are in magnificent early wash colour. The first chart of the world is one of them which unfortunately has suffered some loss. The second is an important one of the River Nile delta in its first state dated 5 November 1798. The Battle of the Nile occurred on the 1st and 2nd August 1798, in Aboukir Bay, between Rear-Admiral Nelson in command of the British Fleet and Vice-Admiral d’Aigalliers of the French. The British effectively crushed the French fleet.

There are fine harbour charts such as Bombay, and harbour approaches such as Singapore, Batavia and Canton which clearly identifies ​‘Heongkong’. America is represented with two fine large charts of the West Indies and Gulf of Mexico. Two long two-sheet charts cover the east coast of America. They are designed to match perfectly into one large four sheet map of the coast. To allow for a continuous coastline the chart is orientated with north to the upper right making for an unusual but clever projection. 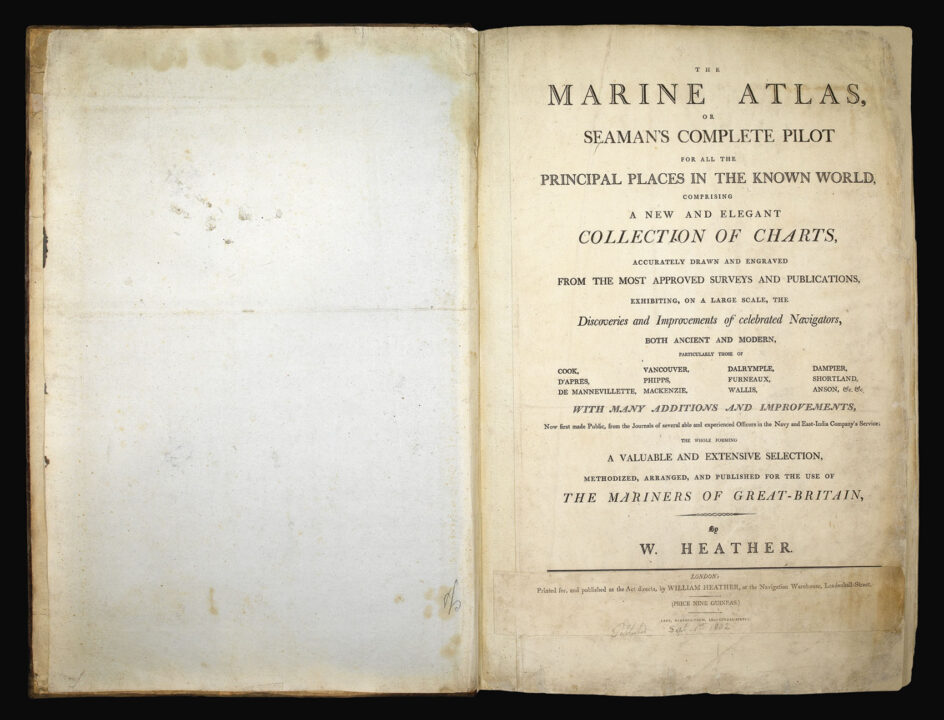 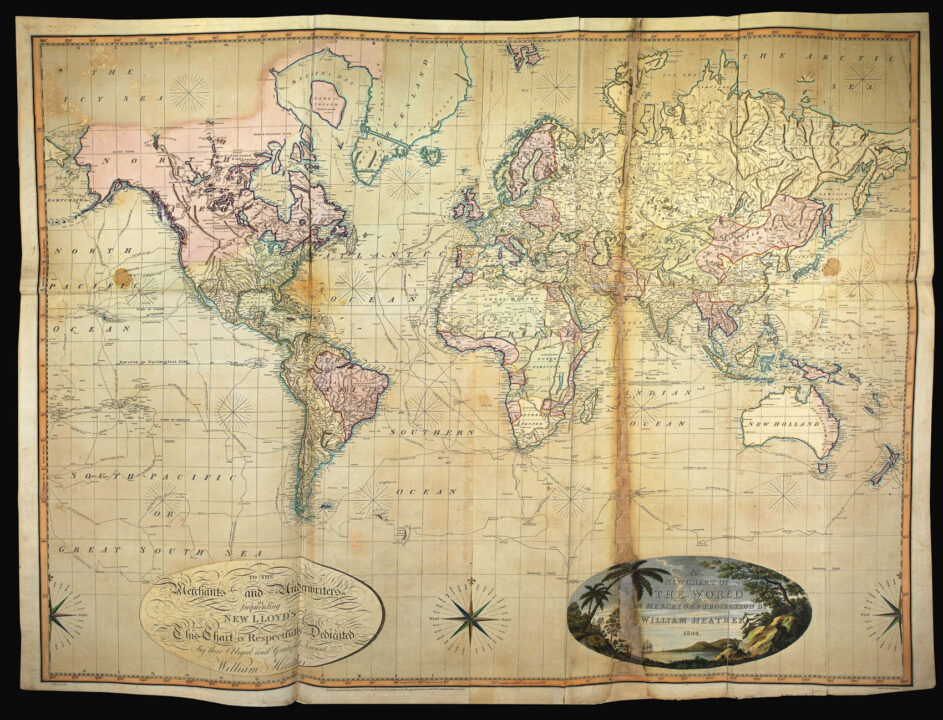 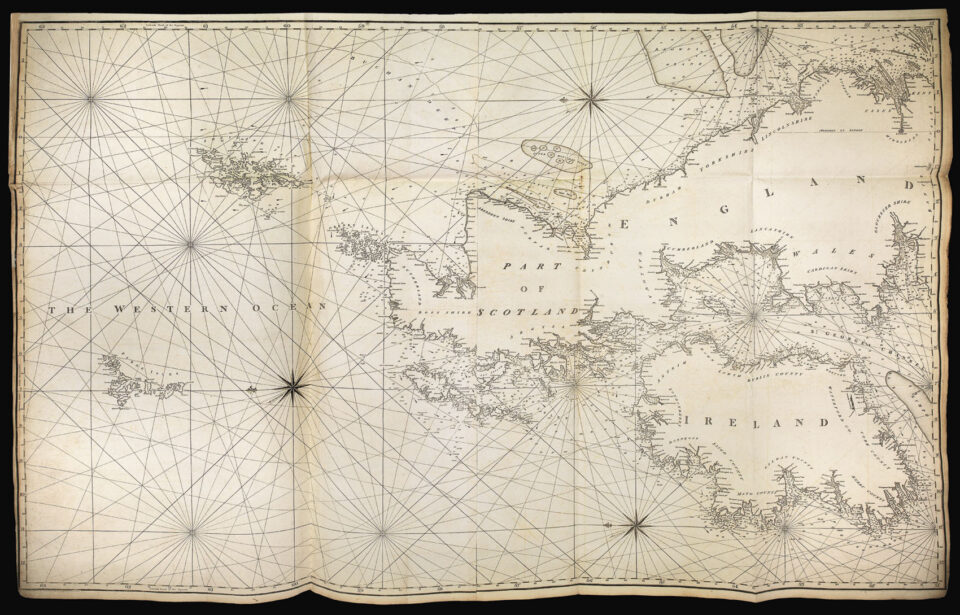 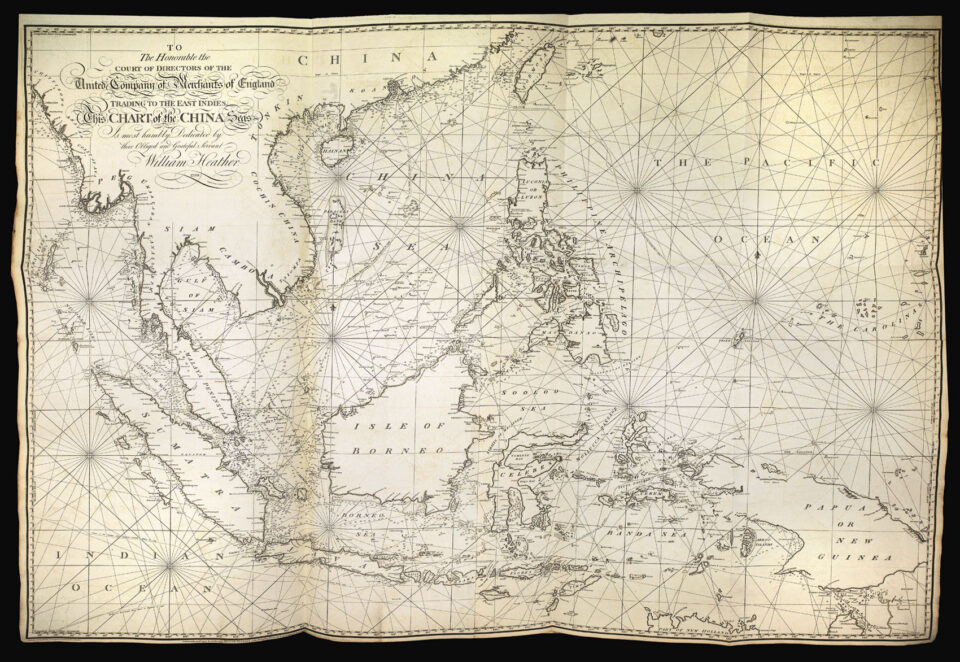 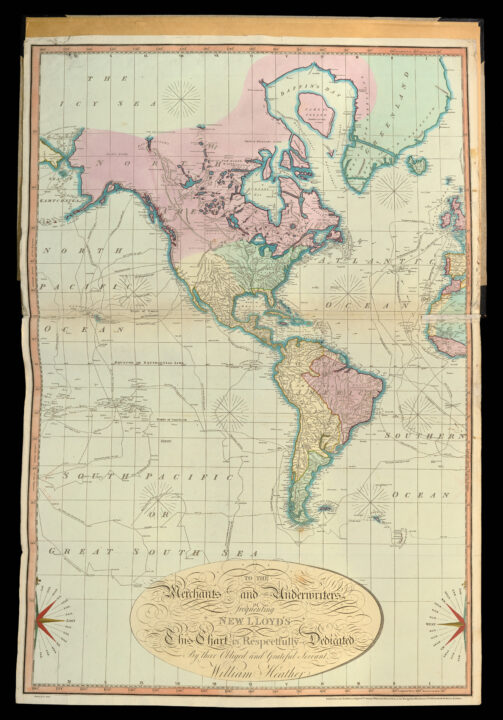 William Heather 1793–1808].
[The Marine Atlas or Seaman’s Complete Pilot For All The Principal Places in the Known World].