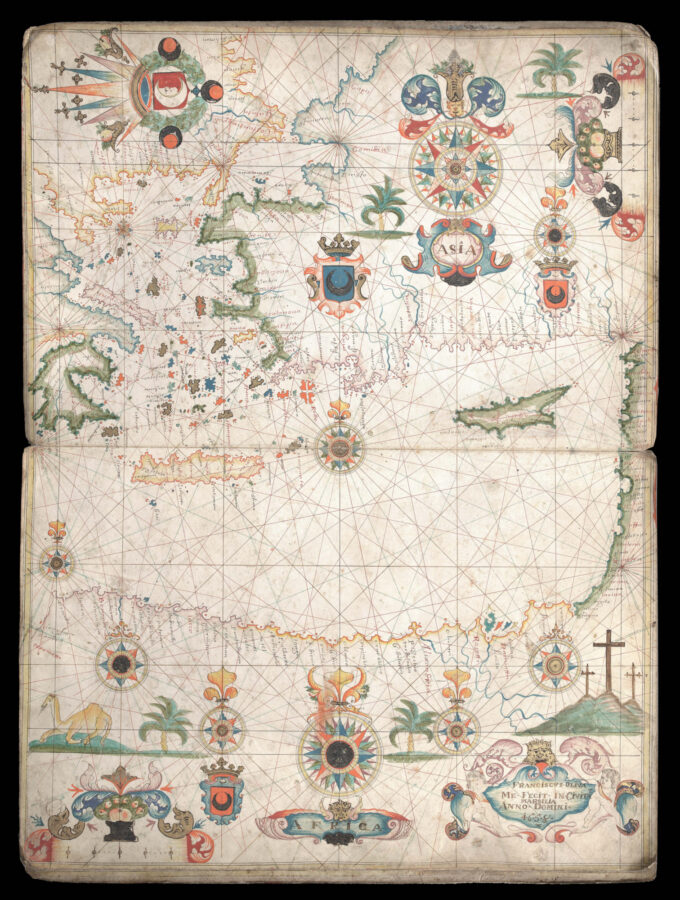 The portolan chart originated in thirteenth century Italy, as an aid to the pilots navigating their way across the often treacherous Mediterranean Sea. They are characterized by rhumb lines, lines that radiate from the centre in the direction of, often elaborate, wind or compass points that were used by pilots to lay courses from harbour to harbour. Generally drawn on vellum and often embellished in silver and gold, they were, at their height during the fifteenth, sixteenth, and seventeenth centuries, some of the most beautiful examples of the mapmaker’s art ever produced.

1. Eastern Mediterranean
The chart stretches from Greece and its archipelago, to include Turkey, the Holy Land, Egypt and part of Libya. All blank areas inland are filled with highly embellished elements: ten large and small compass roses, cartouches for the author’s signature and for Africa and Asia, two scale bars topped by an urn motif, four crowned armorial shields of the Ottoman Empire, three crosses for the Calvary, a seated camel, four palm trees.

2. Central Mediterranean with Italy
The chart is centred on Sicily and includes Italy, Corsica, Sardinia, the northern coast of Africa, part of Greece and the entire Adriatic coast. In Africa there are three palm trees, an ostrich, a camel, and an armorial shield of the crescent moon. There are nine large and small compass roses, a scale bar on each page and cartouches naming Africa, Barbaria, and Europa. Malta is coloured red with a black cross to indicate the Order of Saint John.

3. Western Europe
The chart shows Spain and part of France, each with their armorial shields, the Balearics, part of northern Algeria and Morocco. Cartouches for Barbaria, Africa and Europa, a banderole for Spagnia; France is simply capitalised in red. There are nine large and small compass roses, two scale bars, a crowned armorial shield of the Ottoman Empire and three conjoined palm trees. Majorca is coloured in red and gold to indicate the flag of Aragon.

4. Malta and part of Gozo
The coastline is well delineated, however the wealth of the information is contained inland: the road network is mapped, including both main roads and secondary ones, with the city of Medina, also know as the Citta Vecchia, in the centre. Also marked are forts, the salt lake and the water spring.

5. The Balearics
A single page chart showing the islands of Ibiza, Majorca, Minorca, Formentera and Cabrera, with two compass roses and a scale bar. The islands are coloured in green and show the mountain ranges. A pier stretching out from today’s Palma indicates a safe port, and soundings and achorages around the islands are marked.

6. Sicily
Large chart of Sicily, oriented with north at the bottom. Palermo and Messina are drawn including the city walls and forts, and are topped by gilt crosses, as well as Monreale near Palermo. Messina, Siracusa, Catania, Patti and Cefalu are topped by gilt croziers, as well as Rigio (Reggio Calabria) in the mainland, and Lipari. Mugibello, today’s Etna, is depicted erupting, as well as the eponymous Vulcano, near Lipari.

8. Cyprus
Large scale chart of Cyprus, with the crescent moon shield within the island. The rivers and mountain ranges are shown, as well as soundings and anchorages.

9. Crete
Large map of Crete, including the islands around. The cities are named and drawn, and the rivers and mountain ranges represented.

10. General map of the Mediterranean
Index map of the entire Mediterranean, stretching from the Atlantic to the Black Sea and showing the coastal outlines of Portugal, Spain, France, Italy, the Adriatic, Greece, Turkey, the Holy Land, North Africa and the islands. The map is drawn within a graticule of parallels and meridians in a cylindrical projection, and bears no toponyms but shows rivers and all the islands.

Ex Libris Gertrude Hamilton (1887–1961), with the Hamilton family motto ​‘Viridis et Fructifera’ under an oak tree. Gertrude was the great-great-granddaughter of Alexander Hamilton. 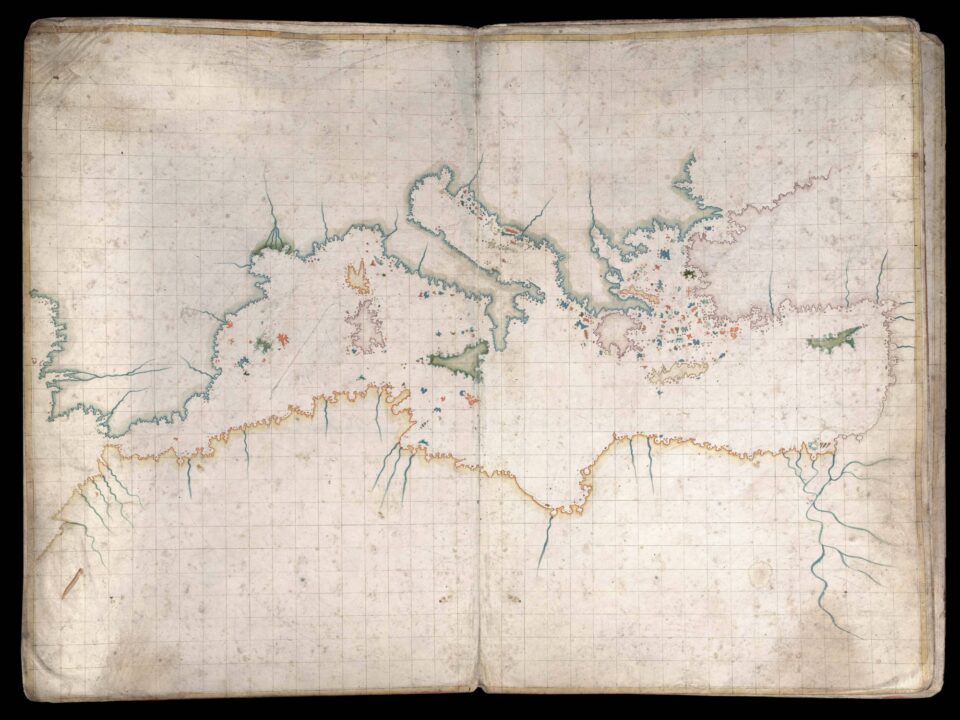 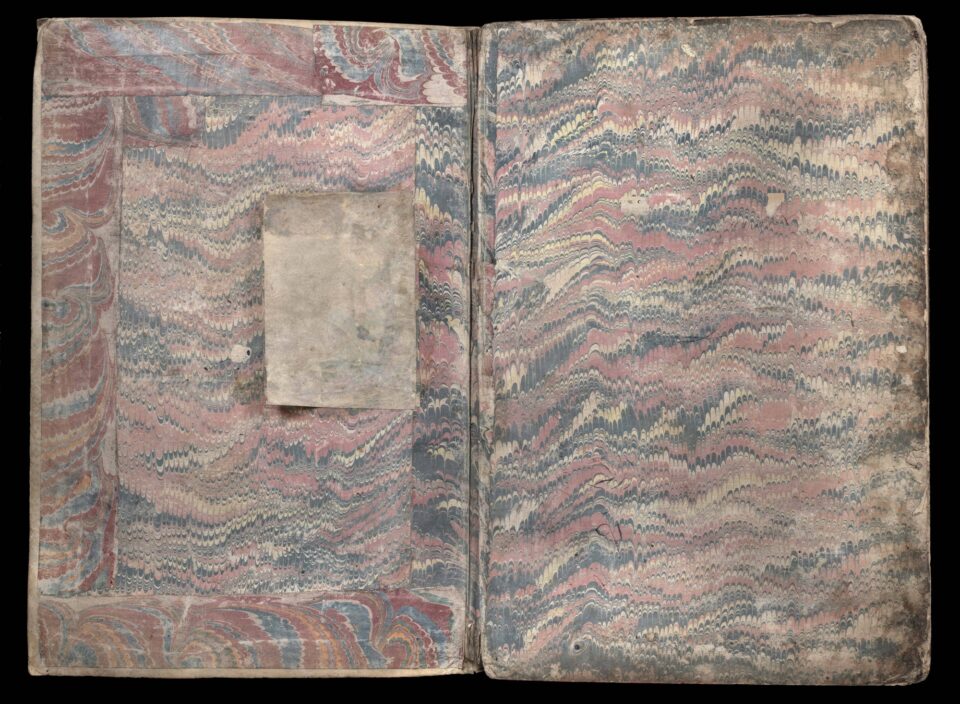 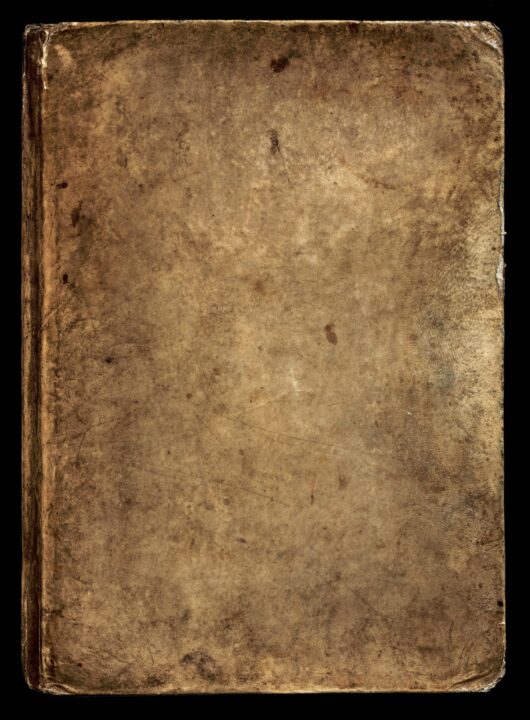 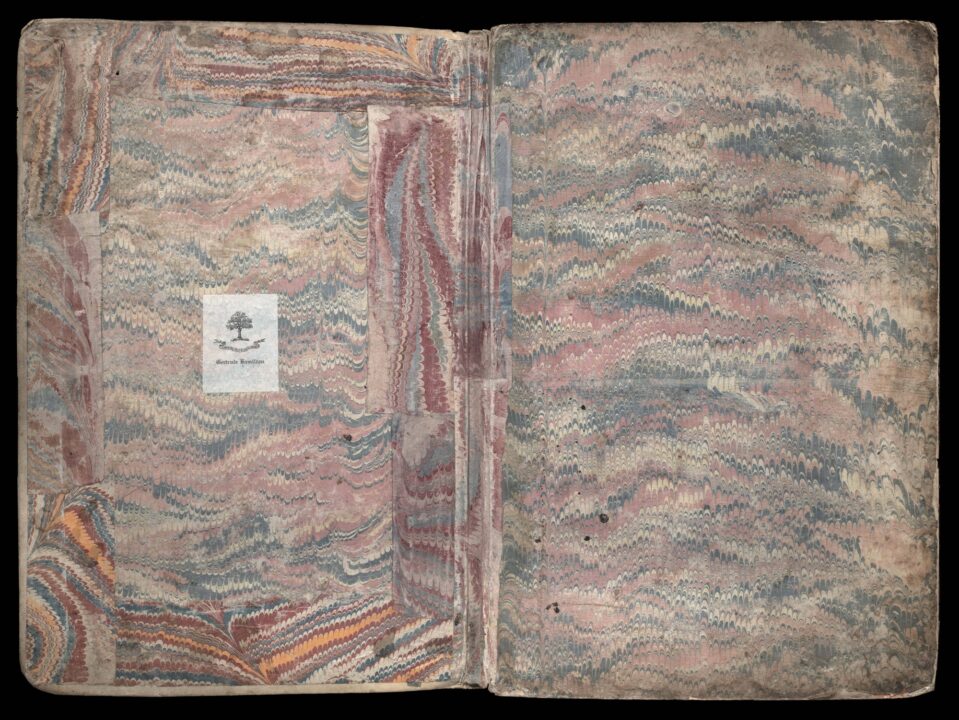 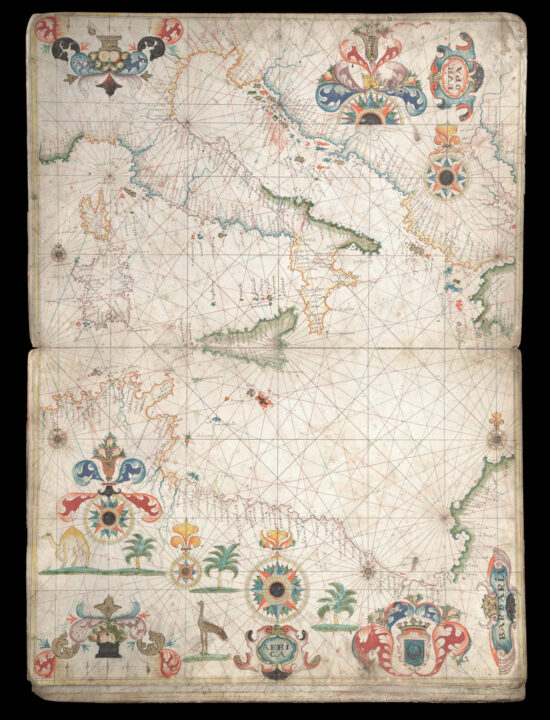 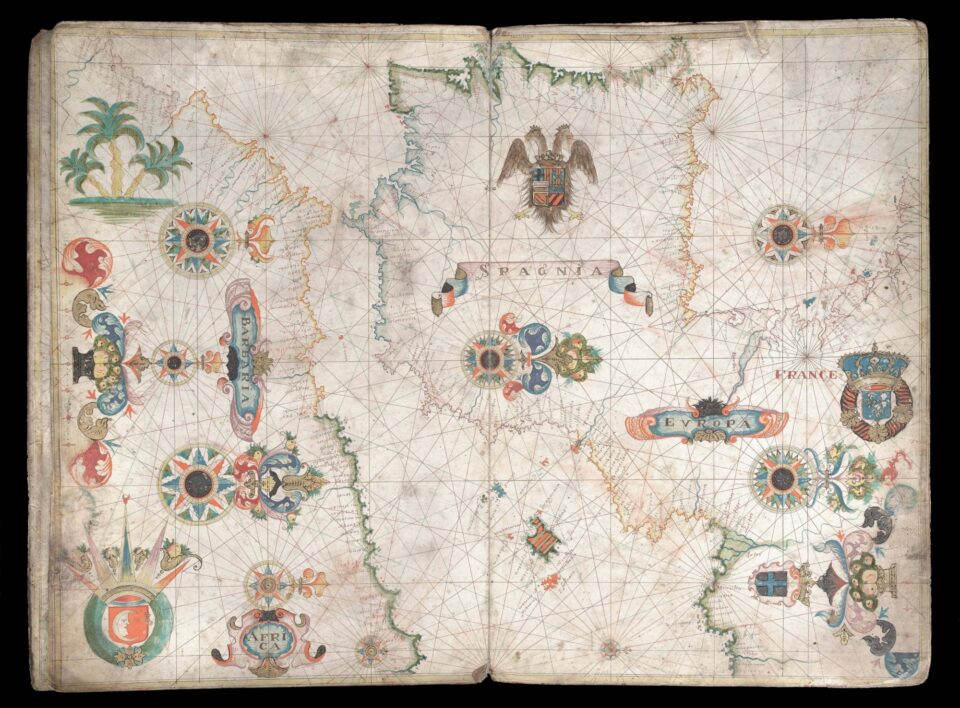 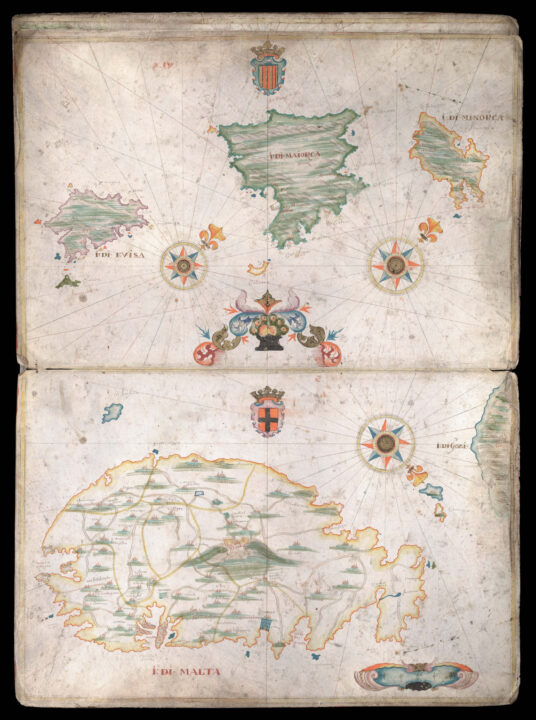 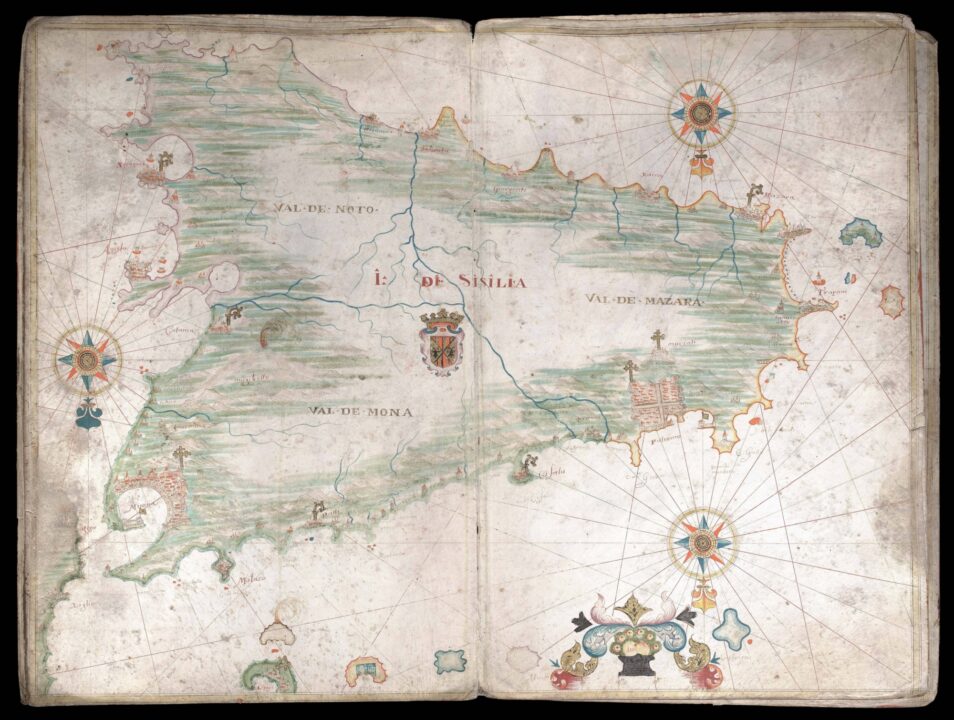 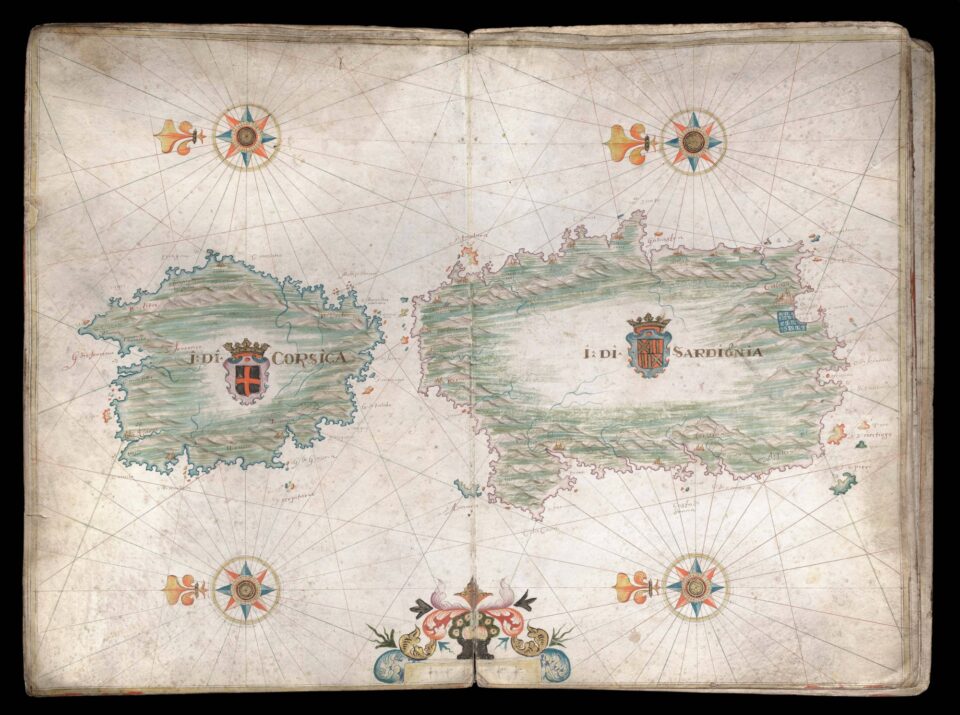 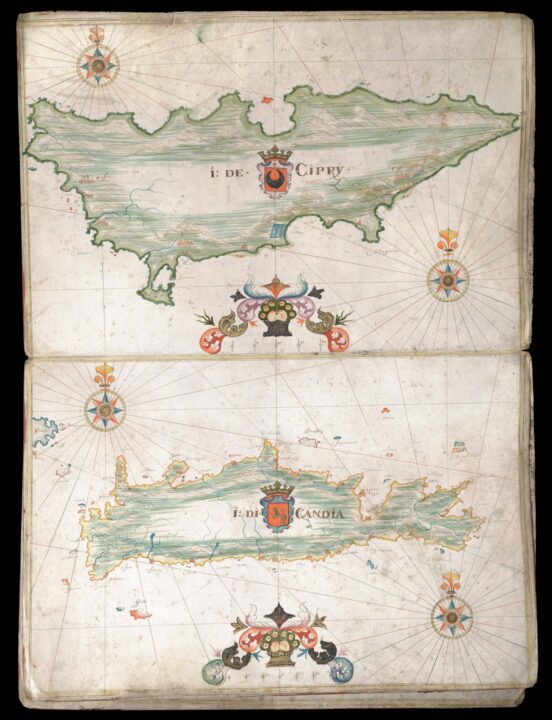