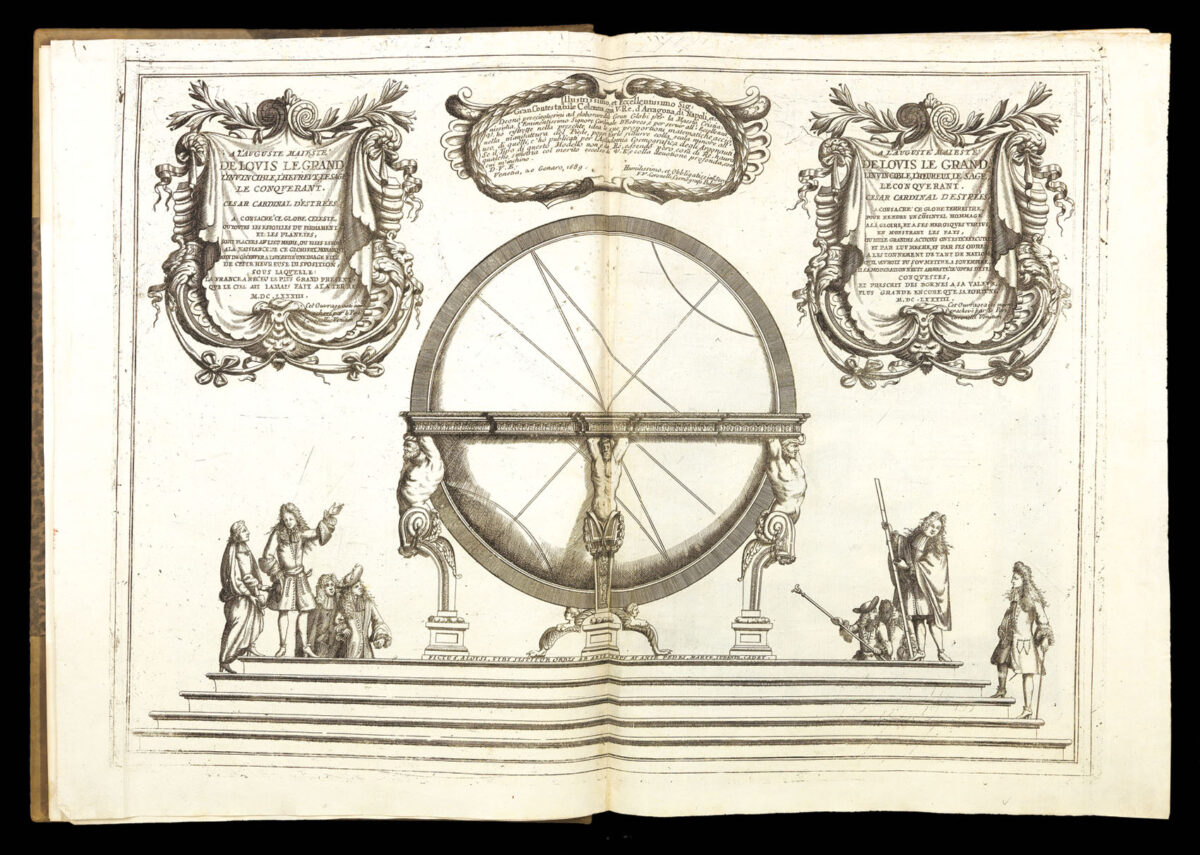 A magnificent complete set of Coronelli’s globe gores, including a set of counterproof images for a 42 inch concave celestial globe

Vincenzo Maria Coronelli (1650–1718), a Franciscan monk, was the official cosmographer of the Venetian Republic and founder of the first modern geographical society: ​‘Gli Argonauti’. He earned his great reputation by the exactitude and the beauty of his maps and globes. In his celestial globes, he designed 83 constellations and a catalogue of 1902 stars. Of his terrestrial globes, Stevenson says that he omitted nothing of interest to geographers, navigators and explorers:

​“He added a rather unusual number of legends, explanatory and informative in character, but never seemed to crowd the space which he had at his disposal. So exquisitely engraved were his maps that he was able to avoid the appearance of confusion noticeable on other globes of the century“

The ​‘Libro dei Globi’ forms part ten of Coronelli’s geographical opus that he published under the general title ​‘Atlante Veneto’. Of this book of globes Armao knew one edition of the 1697 and one of 1705, each recorded in only two examples. More recent work by Wallis has revealed intermediate stages between those listed by Armao, comprising variations in dedicatory texts, or the inclusion of new peripheral material added to each copy more or less at random from the large stock of plates from Coronelli’s work.

Only ten institutional copies of Libro dei globi are recorded, each representing a bespoke selection of plates available when each was made-up, with versions published with between 135–169 plates, with no two examples exactly the same. The gores often overlap and duplicate large areas of engraved surface (a device presumably deployed to make the globe-maker’s life easier), and so it was not always necessary for an example to have every sheet. The present work has 152 leaves, and, if joined, would form 9 COMPLETE separate globes (two, four, 18, and 42 inches in diameter in both terrestrial and celestial hemispheres, including polar calottes, and the concave 42 inch celestial example).

The concave celestial globe is of particular interest, and only appears in a few examples of the first edition. The first mention of Coronelli’s concave globes is recorded in a speech by Sr. Carlo Malavista, given to the Accademie Fisco-Matematico in 1692, who commented on the difficulty of using a celestial globe: ​“as we stand on the earth the sky is above us and we observe it concave and not convex”. Yet it was accepted convention to depict the heavens on a celestial globe as they would appear to an observer beyond the heavens. In order to combat this Malavista went on to say that the Accademie had fitted Coronelli’s celestial globe gores in a concave form. Coronelli had produced his new concave globe by counter-proof printing, that is by pressing an additional sheet of paper against a freshly made print to create a reverse image.

Rare. There are seven known institutional examples of the first edition, which have been dated between 1697 and 1701. The majority of examples differentiate from the second edition of 1705 — of which there are three institutional copies — in two distinct ways; firstly the 1697 edition has the title is in manuscript, this is replaced by a printed title in the later edition; and secondly in the way the large terrestrial gores are treated. The gores themselves were far too large for the size of the book. Coronelli overcame this problem by splitting the plates at the Tropics. In the first edition this was done by masking part of the plate he did not wish to print with paper. Hence on the present copy, on only three sides of the gore is the plate mark visible. The plates for the second edition were cut at the Tropic thus rendering a complete plate mark. 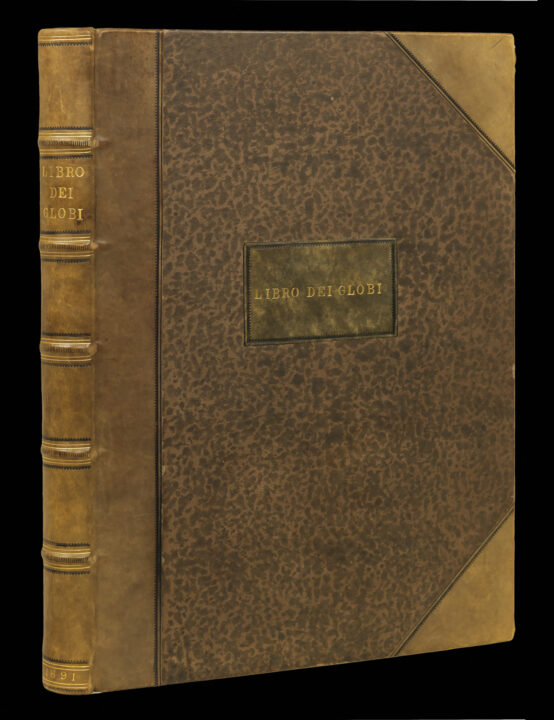 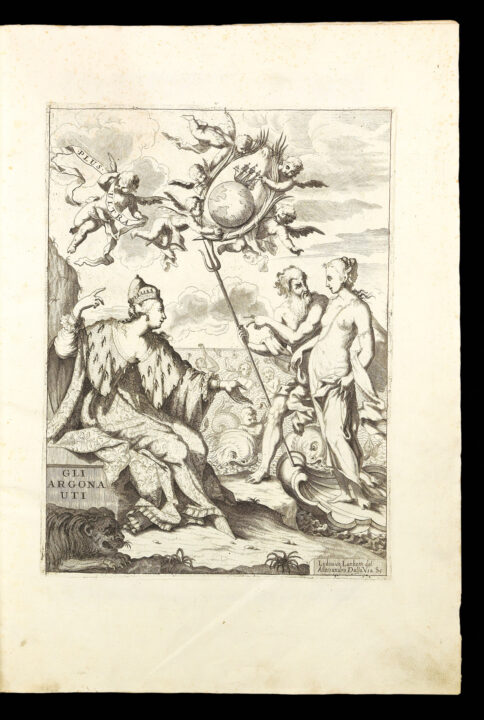 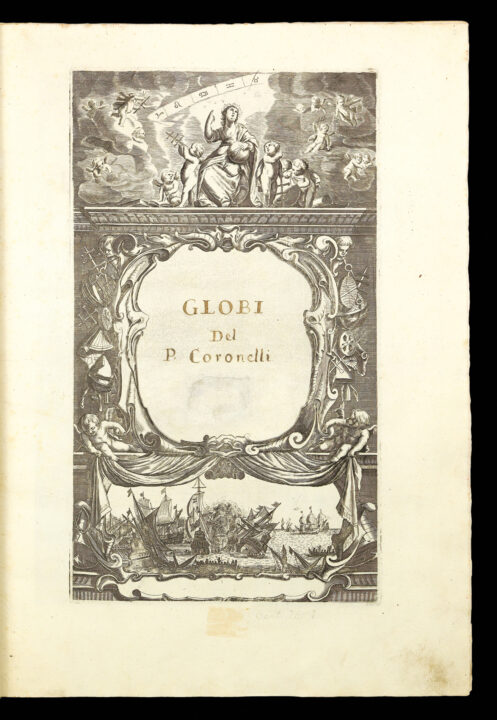 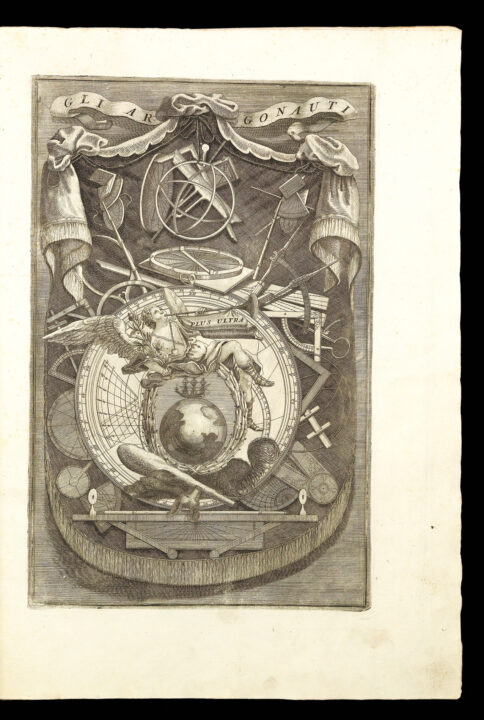 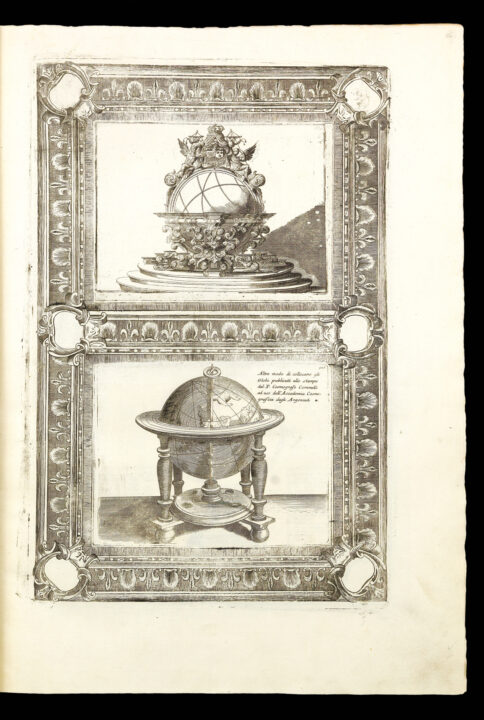 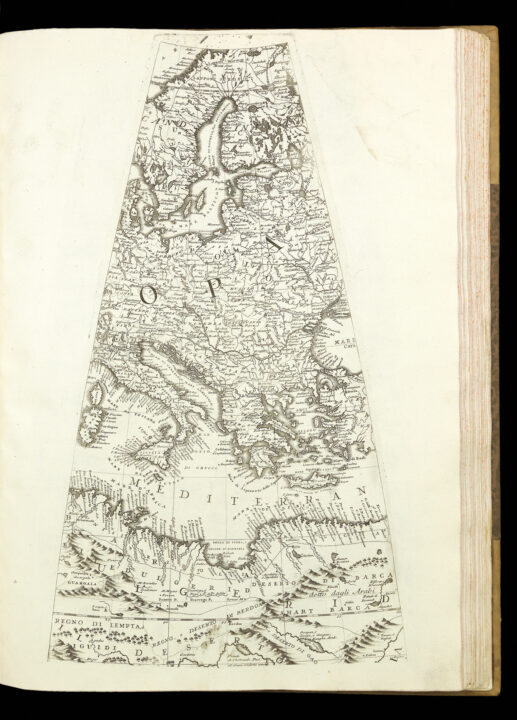 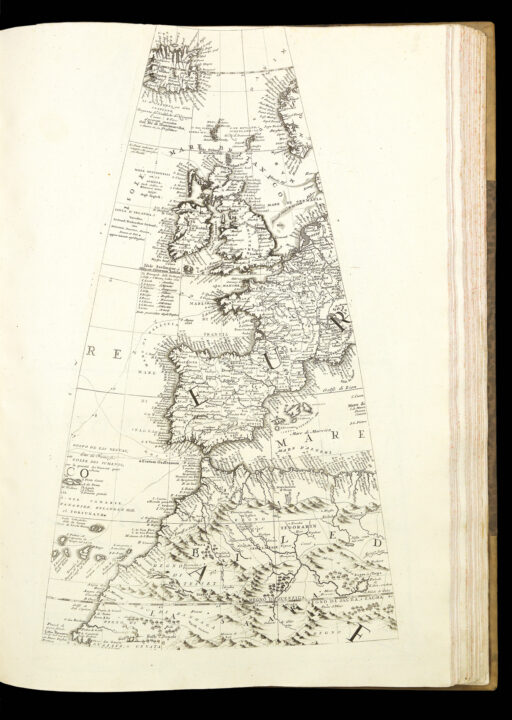 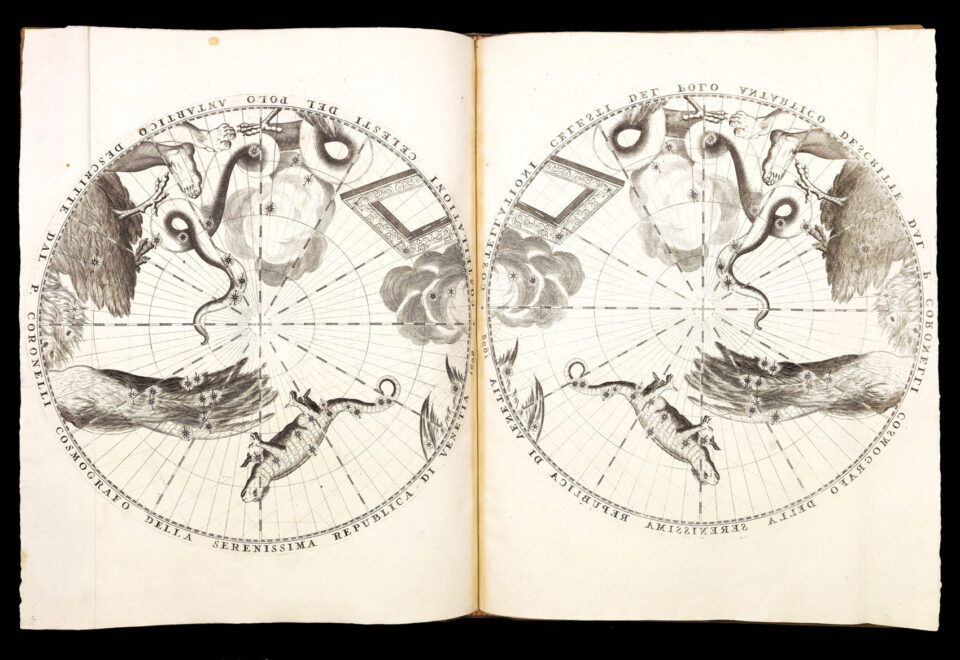