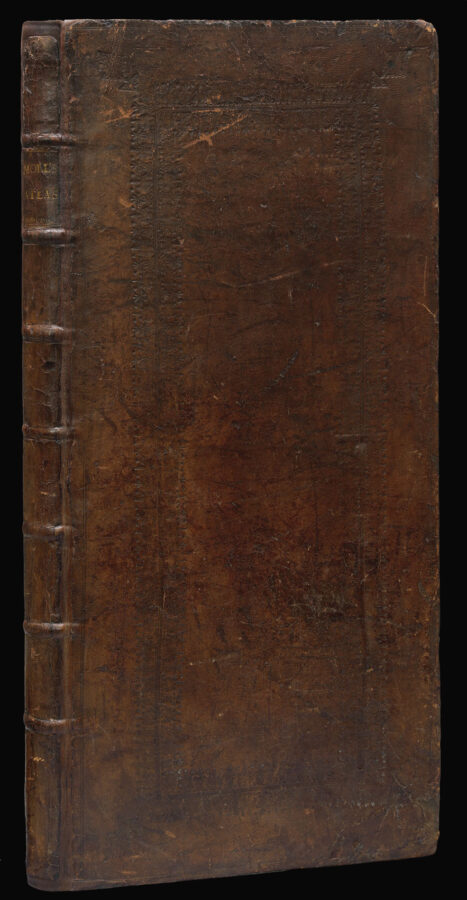 The World described: or, a new and correct sett of maps.

Moll’s famous atlas containing two world maps, and six maps of the Americas: ​“North-America” (showing California as an island, Newfoundland and aspects of the cod-fishing industry), ​“The North Parts of America under the names of Louisiana, Mississippi, Canada and New France,” ​“The West Indies, or the Islands of America in the North Sea,” ​“South America, with a prospect of the Coasts, Countries, and Islands, within limits of the South-Sea Company (also showing California as an island), and Moll’s celebrated map of North America ​“The Dominions of the King of Great Britain on ye Continent of North America” (third issue, circa 1730). This map, sometimes referred to as the Beaver map, is in fact among the first and most important cartographic documents relating to Anglo-French disputes over the boundaries separating their respective American colonies. It includes insets of Thomas Nairne’s important and early map of South Carolina, the English, French and Indian settlements in the Carolinas and Charleston Harbor, and the inset of Niagara Falls with beavers at work. The view of Niagara Falls, without the beavers, was first published in Utrecht in 1697, as part of Louis Hennepin’s ​“Nouvelle decouverte d’un tres grand Pays Situe dans l’Amerique.” The following year an English version was printed and, in 1713, Nicholas de Fer, cartographer to the French King, copied Hennepin’s view and added the famous beavers on his ​“Carte de La Mer du Sud & de La Mer du Nord.” The imagery was included not just because of its charm, but because beaver pelts were a significant part of a highly successful American fur trade — an industry that was used to promote settlement in America. The industrious nature of beavers, moreover, symbolised the notion that control of the land – and the wealth that resulted – was brought about by hard work.

The atlas is extra-illustrated with: Guillaume De l’Isle’s map ​“The Seat of War on the Rhine being a New Map of the Course of that River from Strasbourg to Bonn… [London]: Printed for T. Bowles & J. Bowles, [n.d.]; one of ​“Bowles’s New Four-Sheet Maps” ​“London Survey’d: or a New Map of the Cities of London and Westminster and the Borough of Southwark. to the present year 1736” [London]: John Bowles [n.d.]; ​“Geography Epitomiz’d” [London]: Thomas Bowles and John Bowles, 1738; and Fordyce’s ​“Comitatus Anglorum. Being a brief but Comprehensive Synopsis of Statistical and Political Arithmentic” . [Birmingham]: [no publisher], August, 1806. Moll emigrated to London from Germany in about 1675. By 1678 he is recorded as working for the map-maker Moses Pitt as an engraver and frequenting famous Jonathan’s Coffee House, where he mingled with the likes of Daniel Defoe, Jonathan Swift, the buccaneers William Dampier and Woodes Rogers, John Oldmixon, Thomas Salmon, Samuel Simpson, and for all of whom he made maps to accompany their works.

​“Moll’s reputation rests upon a long and extremely fertile career of almost sixty years that yielded a diverse offering of over two dozen geographies, atlases, and histories and a myriad of individual maps, charts, and globes, spanning the known earth. Through his many works, he had also had an impact beyond geography and cartography on his adopted country and its future by graphically staunchly advocating early British expansion and Empire” (Dennis Reinhartz for DNB).

​“Moll first gained notice in London in the late 1670s as a fine engraver working for map publishers such as Moses Pitt, Sir Jonas Moore, the royal hydrographer Greenville Collins, John Adair, [Jeremiah] Seller and [Charles] Price, and others. What can be identified as his two earliest maps — ​‘America’ and ​‘Europe’ respectively — and bearing the imprint ​‘H. Moll schulp.’ appeared in Moore’s ​‘A New Systeme of the Mathematicks Containing … a New Geography in 1681… Moll worked increasingly independently. He published his first solo volume, the now rare ​‘Atlas Thesaurus’ in 1695, and in 1701, by which time he worked completely on his own, he published his first major work, ’ A System of Geography’ [as here], an informative global geography with a full complement of crisp, straightforward maps that sold initially for 18s. a copy. Although relatively traditional and derivative, it helped to establish him as an independent geographer-cartographer. 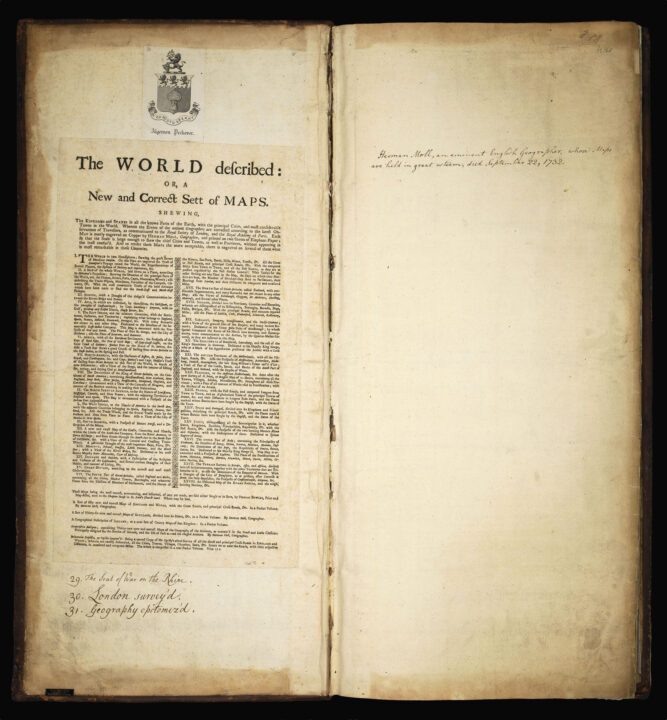 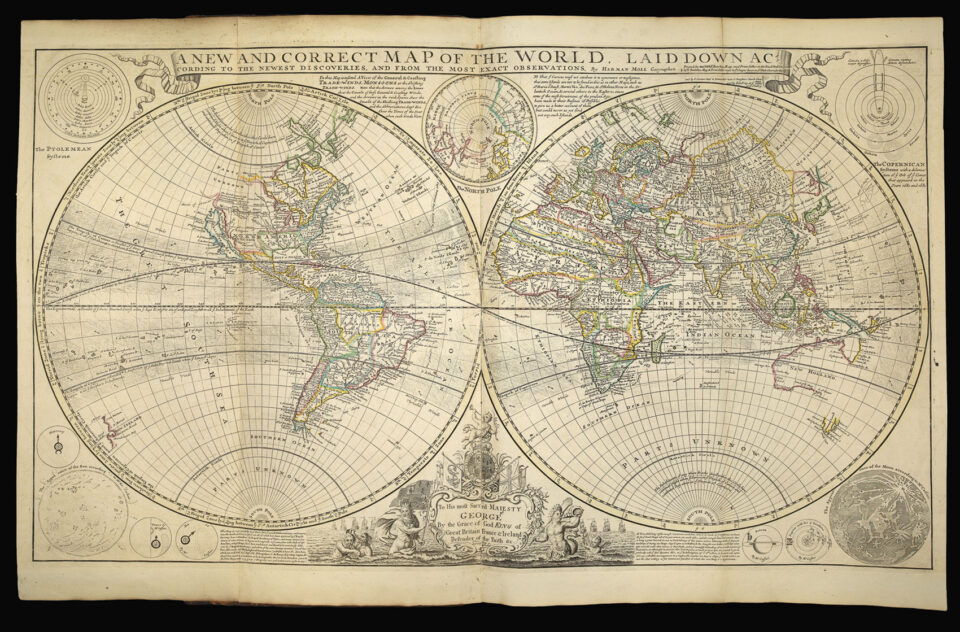 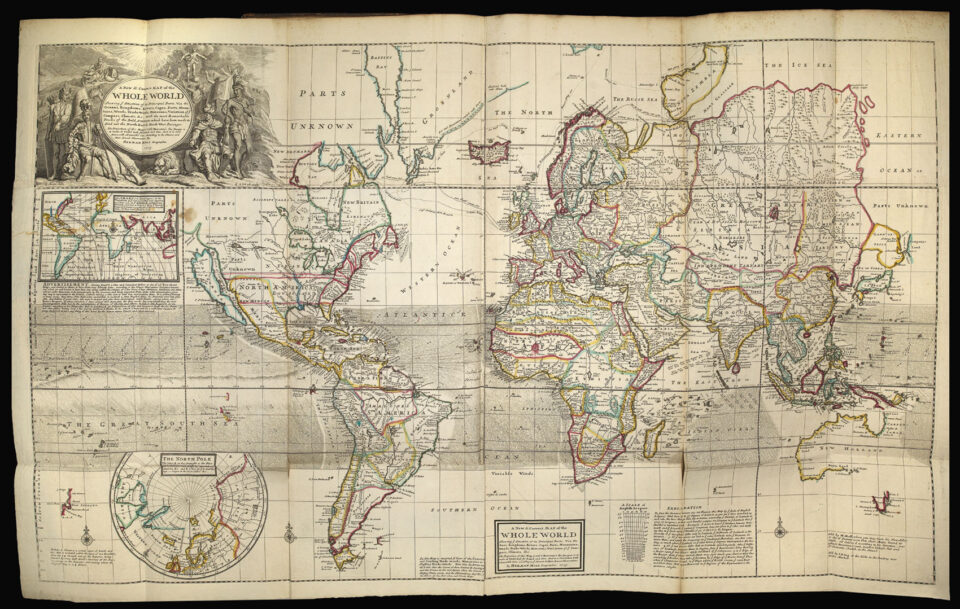 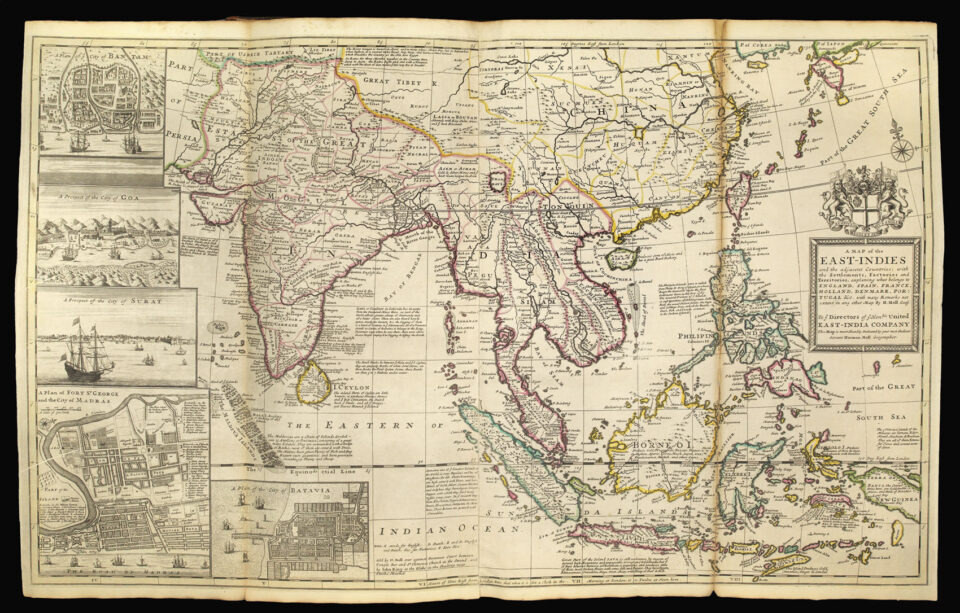 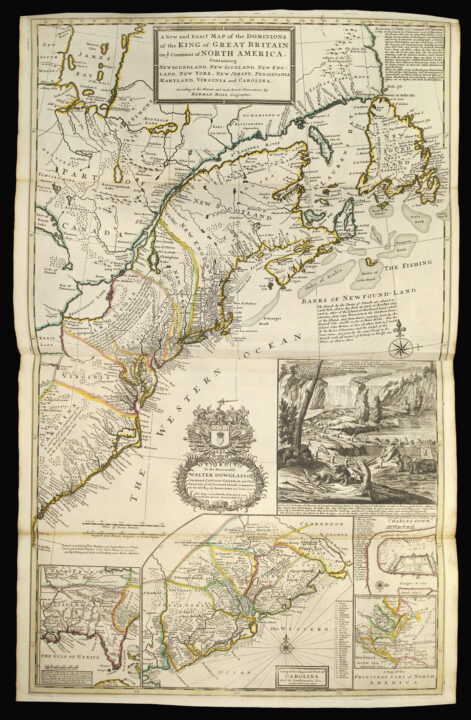 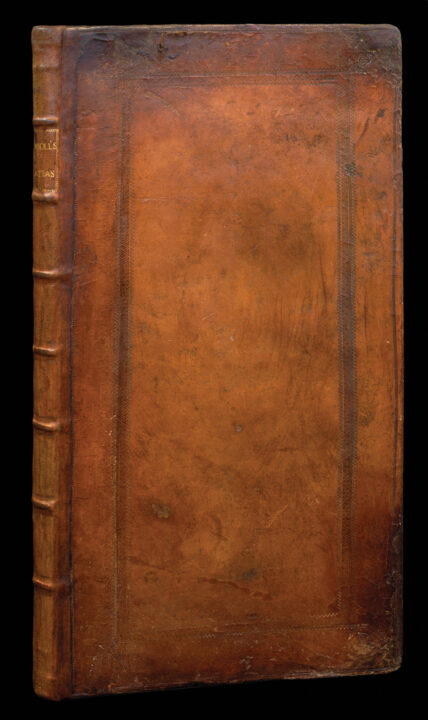 Herman Moll c.1733
The World described; or a New and Correct Sett of Mapps. Shewing the Several Empires, Kingdoms, Republics, Principalities, Provinces &c in all Known Parts of the World’.